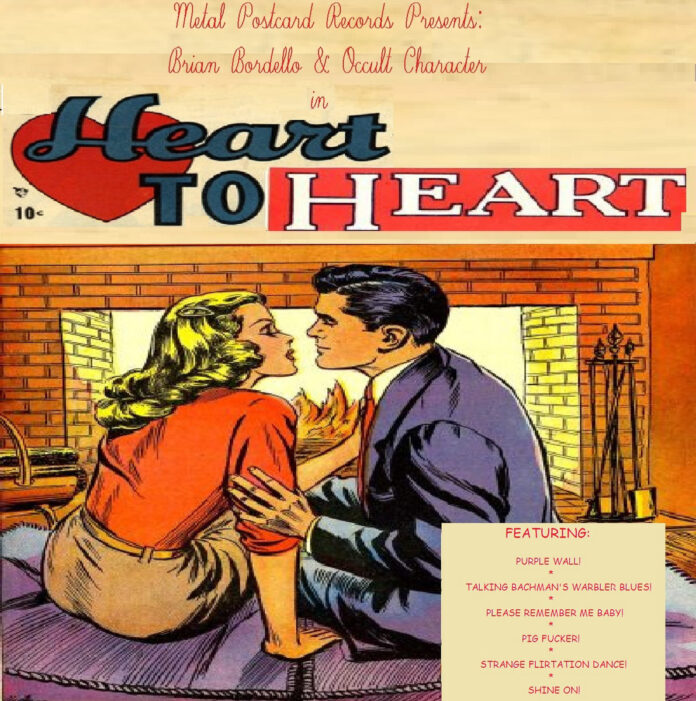 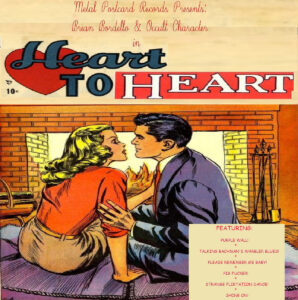 If you’re expecting a highly polished, digitally recorded mini-album here then you’d be sorely disappointed. If what you prefer is songs from the heart, grit and pure musical freedom, then Heart To Heart is here.

Brian Bordello (The Bordellos, Idiot Blur Fanboy) joins forces with Occult Character from Dallas, Texas to bring you a lo-fi, anti-whatever, sprig of six songs that could be recorded in the kitchen, bathroom or porch. It’s brilliant.

Treading the thin line between genius and insanity, the tracks are honest and pure in a way that the music industry doesn’t allow these days. Lyrically, they are endlessly fascinating, musically they are presented warts and all with the odd mis-strummed guitar and off-key vocal.

With words and music passing each other mid Atlantic, the pairing offered each one medium whilst the other supplied the remaining. It works wonderfully, you can imagine the two of them sat outside by a campfire on a Summer evening playing and singing in an improvised way that sometimes brings results and sometimes doesn’t. The intrigue on Heart To Heart is that they are all here.

Pigfucker and Strange Flirtation Dance deserve special mention for not breaking down barriers but, being recorded before the barriers were made. This is music from the soul, from the gut, it’s often not pretty but it is genuinely compelling and guaranteed to keep you listening to the final out-of-tune note.

Heart To Heart pushes boundaries, envelopes, whatever you may want to call it and it brings a smile to the face in these bizarre times as the ‘stop’ button is pressed on the ageing cassette recorder. Stirring stuff.

More from Brian and The Bordellos here. Stuff from Occult Character here.