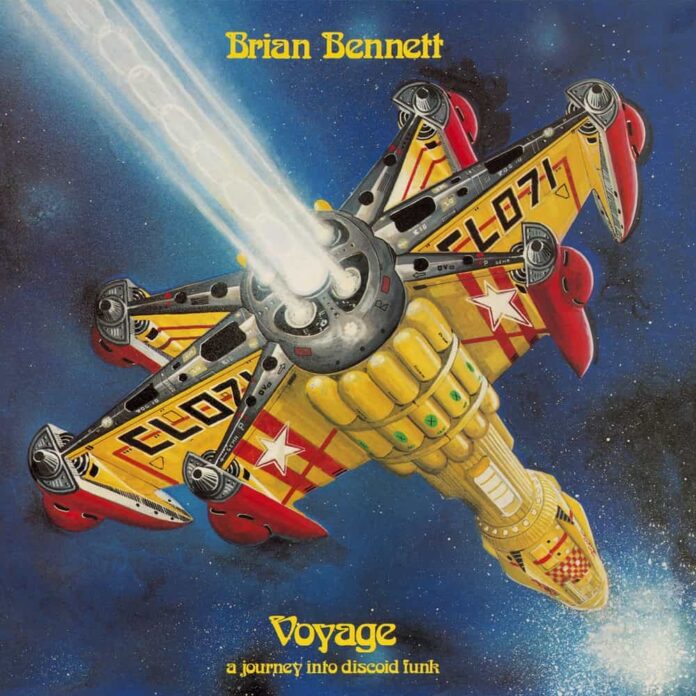 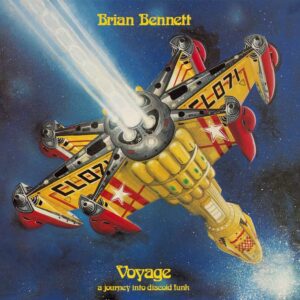 2CD reissue of Shadows drummer Brian Bennett’s 1978 solo album which was described on the sleeve as “A journey into discoid funk”. This set comes with a bonus disc which includes single edits and previously unissued working mixes of the album tracks. Ian Canty samples the delights of extra-terrestrial dance music…

Drummer/Composer Brian Bennett has a packed and rich musical history that reaches right back to the very dawn of British pop. He began in the same way as many teenagers of the time, first performing as part of a Ramsgate skiffle outfit. The young man showed definite promise and netted a gig behind the traps at the Old Compton Street HQ of British rock & roll, the 2i’s Coffee Bar. There he played in a band which backed many of the aspiring rockers of the time. His percussion skills were noted and Brian then hooked up with the backing outfits of Tommy Steele and Marty Wilde, but in 1961 he joined almost certainly the biggest act in the land at the time, The Shadows, replacing their original drummer Tony Meehan.

You might have thought that the work with Cliff and The Shadows would have kept Brian busy, but towards the end of the 1960s he decided to launch a solo career. He initially concentrated on jazz recordings, beginning with the Change of Direction debut album in 1967. Added to this extracurricular activity he also became a session player, composing and playing on many well-known TV theme tunes and incidental music.

By 1978 Bennett was signed to the DJM label as a solo artist, the imprint set up by Dick James over a decade beforehand. Their big star was Elton John, who had been on the roster since his debut album Empty Sky in 1969. But by 1976 John left and without the benefit of his record sales, DJM was pretty much in the doldrums. Even so they still had sufficient means to offer Brian a two album deal. His first offering for the label was 1977’s Rock Dreams, a concept piece based around the book of the same name.

For his next solo venture Brian began composing instrumental pieces inspired by the subject of travel. He initially hit on the notion of using a heavily orchestrated style, but then decided instead to use the musicians’ new toy of choice in the late 70s, the synthesiser. Playing off the space age sound one could get out of this new piece of electronic kit, the theme mutated from terrestrial travel to journeys into the outer reaches cosmos, tapping into the then-current vogue for science fiction blockbuster films (Star Wars came out the year before Voyage’s release). These two strands came together in a decidedly funky fashion on the six lengthy offerings that make up Voyage, which Brian completed with the excellent accompaniment of Alan Jones on bass and synth player Francis Monkman.

Exactly how and why British session musicians of the 1970s took to the funk sound so well is is a bit of a mystery, but it happened. Voyage’s instrumental mix of space, electronics and solid boogie rhythms is as strange and danceable as one could wish for without actually boarding George Clinton’s Mothership. Air, Daft Punk et al – our Brian was there decades beforehand! The album begins with the title track, with it leisurely gathering steam in an introduction which consists of slowly emerging drones, thumping percussion sounds and electro twitters. Then the music shifts into a powerful and percussive funk groove, with an assertive but measured bassline that could have come from Jah Wobble himself. A theme tune to an unmade Sci-Fi programme about disco-obsessed Martians? It wasn’t of course. But going by the sound Brian and band had arrived at, the idea was quite plausible.

Solstice follows on with carefully applied, beautiful keyboards. This one is in a mid-paced jazz/funk mode, more chilled and reflective, with a solid bass anchoring things. The next track Chain Reaction then segues in obliquely with synth spirals, echoes and drum flourishes, giving the effect of almost being musique concrète. Which I suppose isn’t surprising given Brian’s library music background, though both a firm disco rhythm and cool synth sound gain prominence to render the tune a bit of a dance corker.

An electronic thud heralds Pendulum Force – some of the music here isn’t really that far away from the experimental post punk dabbling of the same time frame, despite being conceived by someone who was definitely not part of the new wave. Despite these outré edges Brian keeps one eye on the dancefloor most of the time, slipping smoothly into bass-led big beats after the somewhat challenging introduction. Air Quake then slowly emerges into view from an eerie landscape of dancing synths skitters and drum rolls. Then it develops into a mutant-jazz/funk electro-squelch, before returning to the introduction’s stylings.

Closing number Ocean Glide, which appeared on the flipside of the Pendulum Force single when it was extracted from the Voyage LP, has glistening keys that cede beautifully to simple piano and electronic drones. This is the only track that doesn’t seek to get the listener up and dancing at any time during its duration, yet it forms a curiously optimistic end to Voyage without a word being uttered. This was an album that I found all these years on to be a truly satisfying listening experience, as well as being a touch stranger than one may initially suppose. It is all the better for it too.

The second disc collects the single edits of Pendulum Force and Ocean Glide and a previously unreleased “working” mix of the album itself. Though Pendulum Force wasn’t to be chart-bound, it really isn’t that far removed from Space’s Magic Fly hit from the year prior to its release, so it was worth a punt as a single. The “working mixes” are of course rougher and you can hear Brian counting in and announcing the tracks before they start, the only human voice on the set. This proves to be a nice extra that helps the listener see how the various tracks took shape. Chain Reaction is particularly good in this stripped back guise and Air Quake thrillingly verges on going out of control.

Though Voyage did not make too much headway on original release, it later became popular with samplers due to its infectious, odd and danceable electro grooves. I can only conclude that the album is an imaginative work that would have been much lauded if it came from a “hipper” source. This release, with a booklet including observations from Brian, engineer Dick Plant and Bill Brewster, finally gives the record a chance of some very much deserved respect. An eccentric, quality recording equipped with a sound that has enabled it to show up in 2021 like it could have been recorded yesterday. I felt much better for having heard it, as in these times of enforced home life Voyage’s neat sonic journey to the stars was a godsend.