Home Books UK Book Reviews Breathing The Same Air: A memoir of my time with XTC –... 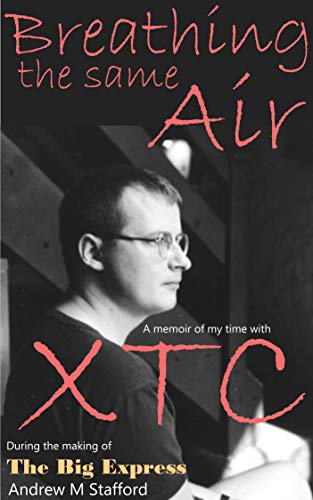 Breathing the Same Air: A Memoir of my time with XTC (During the making of The Big Express) by Andy Stafford

Andy Stafford is a man who rings bells, knocks doors and takes opportunities. The bell in this particularly hair-raising passage (for me anyway) belonged to none other than Hugh Cornwell, who Andy and his mates had diligently tracked down to his West Country lair. Thankfully, Hugh turns out to be a good sport and the author generally finds doors open for him. He seems to thrive in that glorious, pre-social media age where, if one wished to connect with one of your heroes, you had to put in the hard yards, waiting around stage doors during endless afternoons, or track and tracing them back to watering holes, (but not usually their houses).

Being virtually the same age as Andy, I obviously identify closely with the story he tells. A young Bristolian, growing up with a love of the Punk/New Wave bands of the late 1970s, but with a particular penchant for The Stranglers and XTC. However, Andy had recently been diagnosed with Type 1 Diabetes and therefore was coming to terms with a life-changing condition. As many of us were, Andy was a sound-check gadfly including before one XTC performance when Andy Partridge showed him the chords to a song he was trying to decipher. Another time, he is offered an autograph by an upstart singer from an unheard-of support band, name of Charlie Le Bon. Never heard of him!

Upon hearing from a musician friend that XTC had begun recording at Crescent Studios in Bath, Andy convinces his then girlfriend that they should visit. This is where Andy Stafford and myself diverge. Scarred for life by an experience as a nine-year old knocking on the door of a Wrexham footballer (who was a god to me) and suffering a vicious, foul-mouthed tirade from his wife as a result, I have always found introductions and knocking on doors difficult. Our intrepid door stepper is not one to be deterred by “knocking nerves” however, and therefore he is able to deliver us this wonderful snapshot in time of the recording of an album that divides the XTC fanbase like no other.

Personally, I love The Big Express and generally list it as my favourite. I feel it is a characteristic XTC snapshot, albeit out of focus, of the period when it was recorded, but without any real signs that you could pigeon-hole it as being from that time. Indeed, Andy Stafford correctly makes the point that one of the true joys of XTC is that you cannot categorise their sound into a particular musical period. On The Big Express, songs like The Everyday Story of Smalltown and Train Running Low on Soul Coal are among their best for me and then there is the brilliantly off-kilter Seagulls Screaming (Kiss Her, Kiss Her) and Shake You Donkey Up. I’m not sure, however, that my feelings are widely shared, even by the band themselves and sales of The Big Express were dwarfed by the spoof psychedelia of The Dukes of Stratosphere’s 25 O’clock.

But it’s not so much what they were recording, as the fact that Andy Stafford was actually there when they were recording and therefore able to offer this beautiful portrait of a band past the peak of their fame, but still yet to hit the peak of their creativity. One of the great appeals of XTC to me has always been my perception of their complete normality. I see them as ordinary men, living, as I do, in a small town, and yet producing some of the best music I have ever heard. This is exactly as they come across as, instead of locking the studio door, or giving a foul-mouther send off, the band invite Andy and his girlfriend in and allow them to sit in and watch the recording sessions.

The individual members turn out to be exactly as you hope; Colin Moulding shy but pleasant, Dave friendly, polite and engaging and Andy Partridge the loveable joker. There are details about recording here, not least when Andy Stafford becomes involved in the technical complexities of recording Partridge’s vocals for what turns out to be Seagulls Screaming (Kiss Her Kiss Her). However, what most fans will love is the incidental details such as Dave Gregory talking cars with the author or the curious issue of Andy Partridge playing videos of the band’s singles on the studio VCR whilst providing commentary on the making of them. Poignantly, Andy Stafford recounts the copy of Takeaway, Partridge’s dub experiment, that was annotated and signed for him and which he later sold due to money issues. A painful loss to read about, never mind experience.

When you throw in a cameo appearance by Bob Dylan (yes), this book is, to paraphrase the title, a breath of fresh air in these turbulent times. It certainly did me a power of good and I highly recommend to any of my age group, or, more importantly, to the growing numbers of younger fans who are recently discovering XTC. Andy Stafford has not just painted a vivid picture of the band at work, but crucially has delivered a love-letter to his younger self and it is an essential read.

Breathing the Same Air is available to buy here:
To find out more about Andy Stafford, visit his website

All words by Dave Jennings