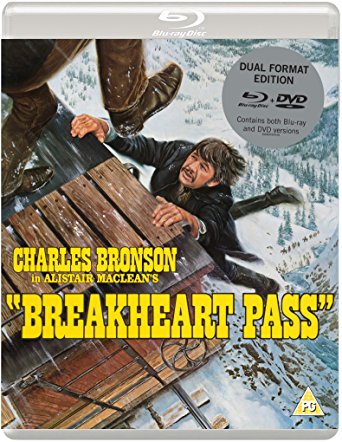 Based on the bestseller by Scottish author Alistair MacLean (The Guns of Navarone, Where Eagles Dare), Breakheart Pass is mostly set aboard a locomotive travelling through snow-covered Rocky Mountains during the frontier era.

The train is on a classified mission to Fort Humboldt, a remote Army post where a diphtheria epidemic has taken hold and its cargo is packed with medical supplies to help out and enough provisions to last a month. In addition to the military presence there are also a number of civilians travelling in first class compartments too, this group including Fairchild (Richard Crenna), a Nevada Governor, and his fiancée Marica (Jill Ireland), the daughter of the post’s commander.

Soon, another two passengers will join them. One is John Deakin, played by Charles Bronson (Death Wish, Once Upon a Time in the West). Deakin is apparently a card cheat with a $2,000 bounty on his head for theft, gambling debts, arson and murder. He’s been taken prisoner by U.S. Marshal Pearce (Ben Johnson) during a train stop at Myrtle and allowed to escort Deakin to Fort Humboldt.

The numbers of passangers on board will soon, though, begin to dwindle, killed off one by one. Slowly it becomes clear that Deakin is the man most likely to save the situation. 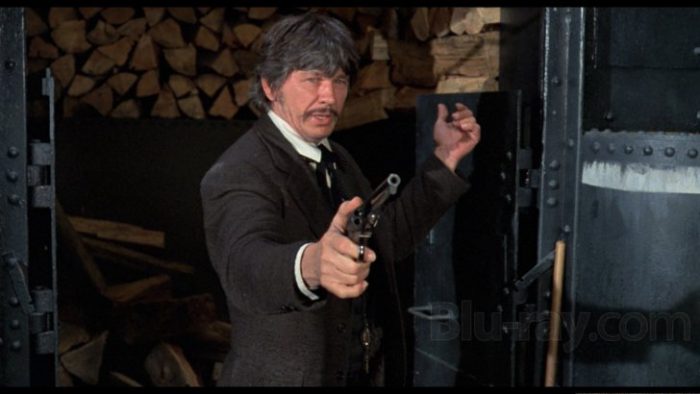 Here Bronson does what he does best: he outwits and outfights bad guys. Tom Gries surrounds him with a great ensemble piece, with top-flight character actors like Ben Johnson, Richard Crenna and Charles Durning, together with Bronson’s real-life wife Jill Ireland.

Gries, whose previous movie Breakout had also starred Bronson and Ireland, does a good job of keeping the action going and the mystery simmering with a plot that has as many twists as the train’s winding journey through Idaho.

Lucien Ballard’s cinematography is equally effective but best of all are the stunts. Inevitably Deakin is drawn into a spectacular brawl atop the moving train. This is a highlight, with him taking on the train’s chef played by Archie Moore, a boxer once nicknamed The Mongoose, who’d won the World Light Heavyweight back in the 1950s.

Breakheart Pass is an old fashioned western that is an enjoyable way to spend an afternoon.

Eureka Classics presents Breakheart Pass for the first time on Blu-ray in the UK in a special Dual Format edition.

Extras include a new and very enjoyable video interview with critic Kim Newman.

For more on the film: https://www.eurekavideo.co.uk/classics/breakheart-pass