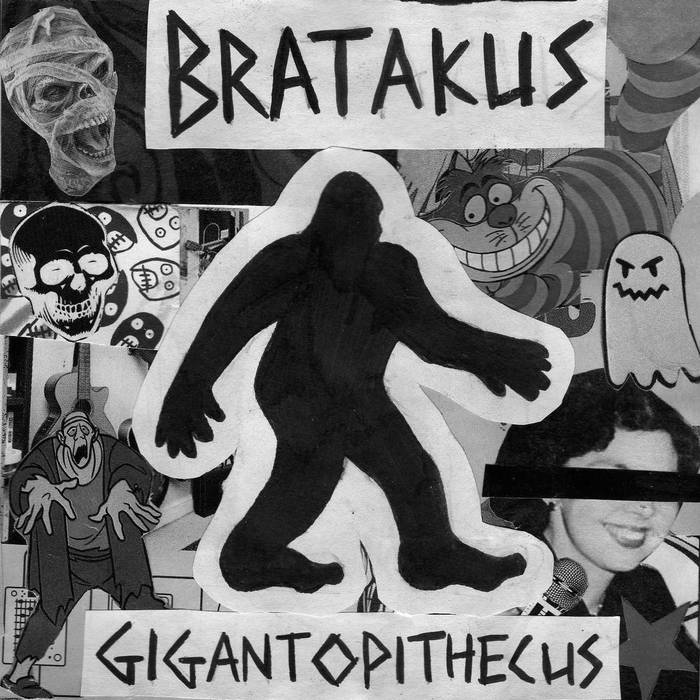 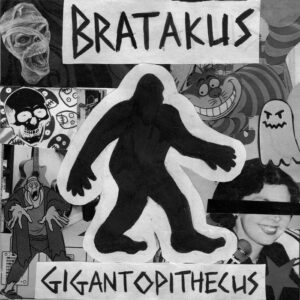 Scots Riot Grrrls kick up a right storm on their debut CD.

We are living in the times of the bastard offspring of “Lad culture”. Like a throwback to the 1970s, #everydaysexism is commonplace and we have seen systemic attacks on services largely used by women, inequality in wages is rife and there has been a visible rise in misogyny. What will happen over in Trumpland remains to be seen but it ain’t gonna be good. Never has the world more needed riot grrrls and they are angrily pouring out of the woodwork. (New Wave of Riot Grrrl, anyone?).

Hailing from the North of Scotland, these Riot Grrrrrls (extra rolled R’s on account of the Scots accent, yeah?) have been chalking up a raft of gigs as far south as London.  Pretty good going considering there are only 2 of them and they are still teenagers.

The first thing that struck me about this debut release from Bratakus was the packaging. A cut’n’paste affair with poster-cum-lyric sheet that folds up to create the cover. It took me straight back to early DIY punk bands like Fallout. Their label also takes it name from the B-side of Crass’s first 7 inch. 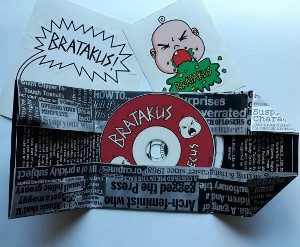 The next thing that smacked me in the face was the guitar – raw with all the rough edges and spikes, none of that sanding down and cleaning up that studio engineers are all too often guilty of. There is a definite hardcore feel to this. When I say hardcore, let me be clear, as the term has been bastardised, misused and watered down so much. I mean early hardcore in the vein of Minor Threat, (early) Black Flag, Reagan Youth, Born Against – fast, angry and raw. On doing some internet research it came as no surprise that Bratakus declare their love for Minor Threat and Reagan Youth. Perhaps the Cuinn sisters have been raiding their parents’ record collection? They know their punk rock history.

Vocals are angry gravelly shouting for the most part with the odd moment of melody (think Sofa Head). At their most guttural, the vocals can be seen as part of a continuum of great bands with strong wimmin’s vocals from the past such as Disaffect, Pink Turds in Space.

Lyrically there is a mix of punk rock nihilism/boredom, some semi-mystical “open your mind” stuff and straight up anger and despair at humanity’s treatment of animals.  And the title of the EP? More research revealed it’s the name of a, now extinct, giant hairy ape. Draw your own conclusions about what they are trying to say.

Given that they are a 2 piece the drums are provided by a machine. Thankfully drum machines have moved on a lot in recent years and can sound better than a human who is fairly new to playing. There are plenty of highly successful punk bands using drum machines e.g.  Cress, or perhaps a better comparison is Burnt Cross (a pair of brothers with a string of releases but who have only played 2 gigs).

While I can hear that this is a band in its formative years, the fact that they are unpolished is definitely something to stick down in the positive column, yet they are not so unsophisticated as to be straightforward one tempo verse chorus affairs (not that it harmed Minor Threat or Reagan Youth!).

They clearly have a wicked sense of humour as the 3rd song, “Foodchain” tackling animal abuse, plays out with a sample from the Simpsons of Homer and Bart singing “You don’t win friends with salad”.

I understand Bratakus are recording a new album soon and are still hungry for gigs, so any savvy punk labels and promoters, get in touch via their facebook page. If you want the Ep then you need to check out their bandcamp site.