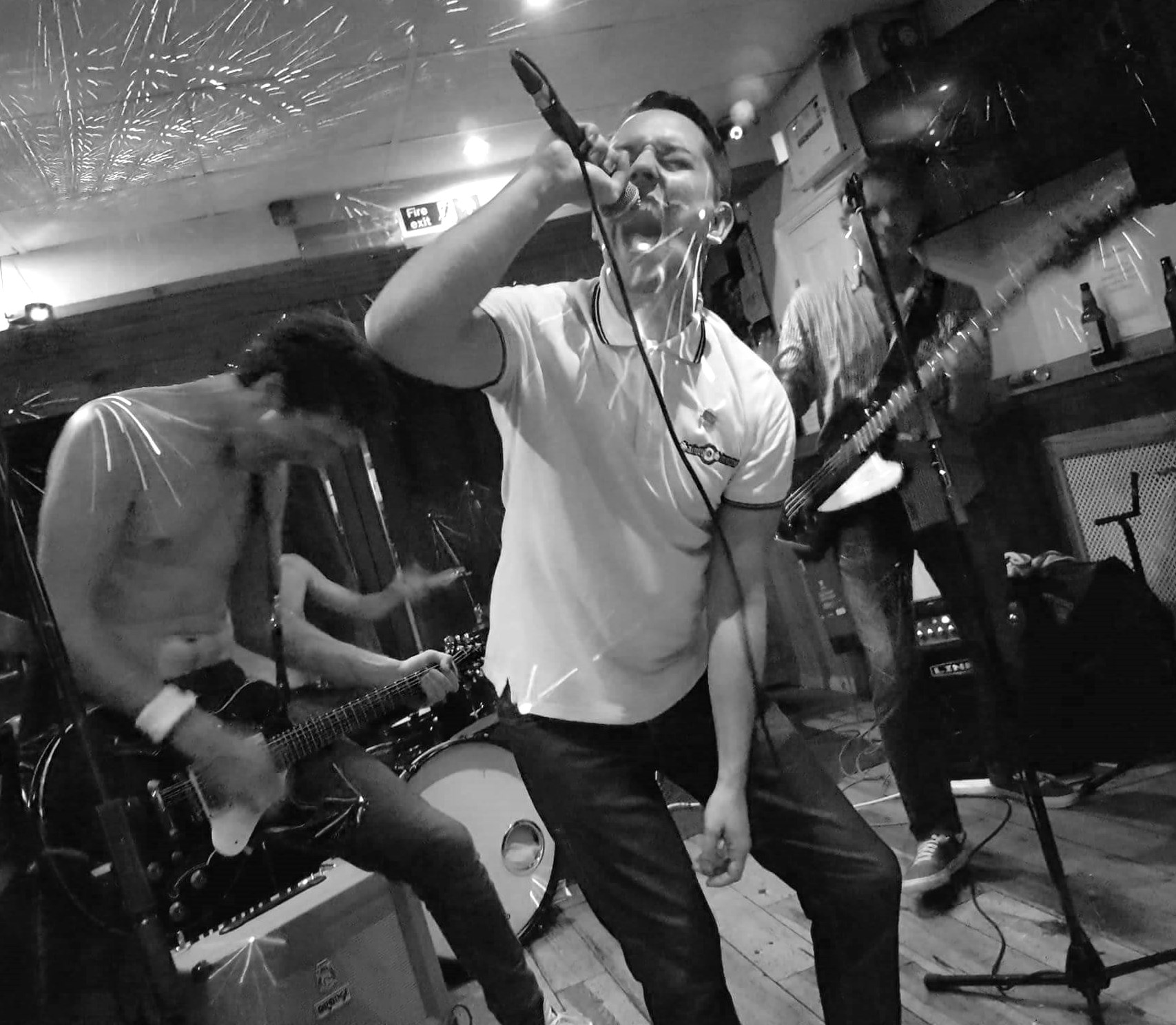 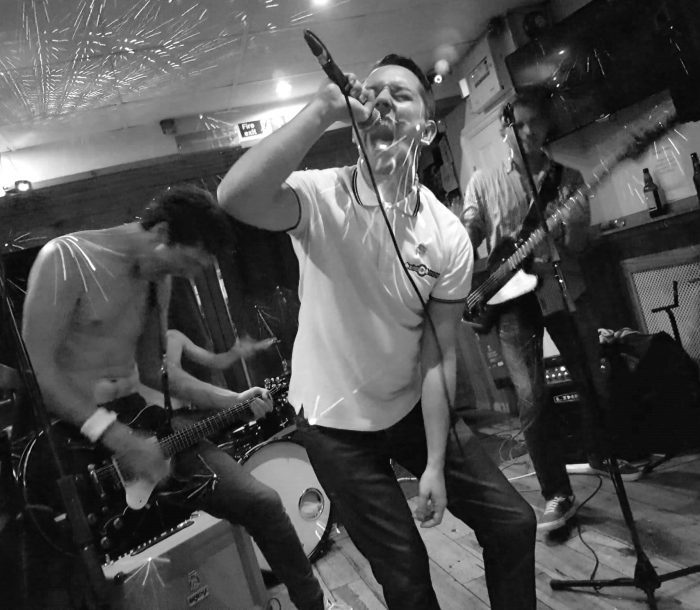 Friday nights at the Caff are Made In Shirley promotions; local bands, cheap entry and beer in a former Amusement Arcade converted into an egg’n’chips rock’n’roll Cafe.  It was Ged Babey’s night off – but he had such fun he was compelled to write it up.

At the end of the night I was stood with a bunch of exceedingly pissed, retired former hooligans, out the back, having a fag, they were chatting about old battles in the late 1970’s.

“…So he was on the deck right, and my brother booted him in the face and kicked his head, clean off..”

” What literally?  It rolled down the pavement, like a football?”

“Yep, no word of a lie. Kicked his head right off”

“Nah, he picked it up, put it back on his neck and wobbled off home”

(This conversation actually happened.  It was worth it for the incredulous look on my mate Pete Harvey’s face.  He hadn’t met the  the Boys before. A perfect end to a great night.)

Earlier in the evening I had asked one of Bitter Self Exploitment why they had chosen the single most stupid, illiterate, nonsensical name for their band.

“We used an online band-name generator. We had to put in three of our influences – so the stupid ones we came up with were the Exploited, that Japanese band called Mindless Self-Indulgence and {one other, I forget… I’d started nodding off} and the first thing it came up with was Bitter Self Exploitment – so we thought we’d keep it because…”

BSE look like a bunch of normal lads but play in the same style and with the same knockabout energy as 1977 Roxy punk bands like Johnny Moped, the Unwanted, the Bears and so on -with a bit of Dangerhouse LA punk  and Angry Samoans thrown in.  It can’t be coincidental; they must have done their research and be Killed By Death collector-scum punk-nerds …. or maybe it is just having an older brother who liked the Sultans of Ping FC or an uncle who used to be in the Not-Sensibles?

They take the piss out of each other, themselves and their fans and just have ‘a laugh’ when they play and that somehow rubs off on the unsuspecting punter and they are just a joyful, shouty punk rock mess.  Their songs are about boredom, frustration and general everyday weirdness like Attack of the Ginger Hitler Puss.

On a small, or rather non-existent, stage BSE are classic purist, ‘look like shit / make a racket’, punk rock band because their non-committal demeanour disguises a totally committed anti-business attitude…. The bassist was talking about his job as a pipe-fitter -“nothing better than crawling thru a pipe on your belly, dragging it thru’ rusty water…” BSE are a neccesary antidote and the most fun you can have with your clothes on. 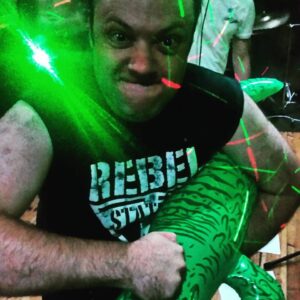 The three piece Rebel Station are a lot more professional and musically exact. I have a lot of mates who would love them. Fans of Stiff Little Fingers, the Clash , New Model Army type anthemic rockin’ windswept punk-influenced rock, they are for you (rather than me…). They are really sound blokes – the be-kilted, cap-wearing bassist didn’t seem to mind having an inflatable crocodile thrust up his kilt later in the evening, although the pitbull-like singer did get his revenge on the green sex-toy. (see pic)

Rebel Station are a proper foot-on-the-monitor punk band with emphasis on punching-the-air rock, who you can check out on their bandcamp here  and facebook here.  I can imagine them going down well at many a ‘punk fest’/ all-dayer.

Headliners Brash Bullets have been around for a couple years now and… If  I was a proper churnalist I would say… have gone from strength to strength, supported a whole range of old punk duffers … but the truth is Brash Bullets can be brilliant live and other times, they can be a-bit shit.  Tonight though Matthew, they were great.  They sounded like a pre-Pink Flag Wire, a youth-club Manics and ATV in their earliest  ‘You Bastard’ incarnation.  For a band so young they have a real authentic old-school sound and love of what they do whilst being fully aware that they are an anachronism.

They seem to split older punk audiences down the middle when supporting the likes on ANL and CJ Ramone – but headlining in a tiny venue they impress everyone, with their short, sharp, surreal, stabs of energy and venom.  Snap and Capital City Disappointment sound harder and faster  and tighter than on their self released album.

Some of the songs are a bit on the corny side lyrically: Girl Next Door and I Wanna Buy Her Love in particular but they were probably written when they were at school.  The more concise Indoctrinated and the surrealist protest of  I Wanna Be A Crocodile are better and the popularity of the latter is only in part due to the inflatable mascots that accompany the band -and end up being used in ritual fencing duels.

It is still early days for Brash Bullets, but they have got something a bit special about their chemistry; Pickles- a mad drummer who plays the whole kit, Buzz – a bassist who occasionally screams his backing vocals so you think his head might explode and two brothers who couldn’t be more different as far as stature is concerned.  Otto is six foot something, a gangling Joey Ramone/Nicky Wire figure who guitar-skills are ever-improving and  the shorter brother, Andrew Defiant,  a pent-up ball of fury, who paces like a caged tiger as he barks out his barbed lyrics.   There are brief moments in the set when the front three all sing together and that is when the bullets really hit the target…

Their aim is true.

For future Made In Shirley events  check here.