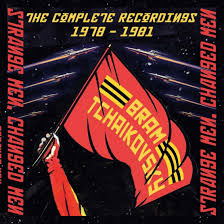 Boxset featuring the three albums recorded by the ex-Motors guitarist Bram Tchaikovsky, with bonus tracks from the contemporary singles and live recordings…..LTW’s Ian Canty feels both strange and changed by a look around the 1978 vintage New Wave hopefuls’ output…….

Doncaster-born Peter Bramall had been playing for almost 10 years when he got his big break as part of the new band Nick Garvey and Andy McMaster, both formerly of Pub Rock powerhouse Ducks Deluxe, were putting together. This outfit, namely the Motors, would look to combine the hard rocking approach of Nick and Andy’s former act with a touch of the New Wave sound that was everywhere in the UK in 1977. Peter had always been known as Bram, but the Tchaikovsky bit came about because of the Punk trend of changing one’s name (their drummer became Ricky Slaughter at around the same time).

The Motors were quickly snapped up by Virgin Records, who saw the potential that the band had in attracting both the New Wave audience and older fans because of their road-tested musical talents. The debut album, entitled 1, brought all the promise into living colour and the single Dancing The Night Away nearly cracked the UK Top 40. Buoyed by this brush of success, the band began assembling songs for the follow up. Here was where the schism between Tchaikovsky and the Garvey and McMaster team opened up, as Bram was not taken with the more commercial approach of the likes of Airport, which he hated despite it being a big hit record. His preference was for a noisier kind of Pop and this would mean a parting of the ways in 1978. In order to explore this interest he got together his own band Battleaxe (quite a Heavy Metal name that, not a total co-incidence as we shall later see).

Making their mark as a live act of no mean ability, Bram was joined by ex-Heavy Metal Kid Keith Boyce on drums and long-standing cohort Mickey Broadbent on bass in what was pretty much a Power Pop trio (the sleeve note it mentions that Mickey and Bram still perform to this day at their local – I’ve got to find out where that is!). Hooking up with Indie label Criminal they released their first single Turn On the Light/Bloodline, with Sarah Smiles being available as well on the 12 inch version. The band now went under the name Bram Tchaikovsky only, Battleaxe being deleted under managerial advice. They followed this up with an odd cover of old standard The Lullaby Of Broadway (all the single tracks are bonuses on disc one).

Both these records met with a generally favourable response and the band were signed to Radar Records, the WEA-backed imprint that had been put together by Andrew Lauder and Martin Davis when Jake Riviera absconded from Stiff with Elvis Costello and Nick Lowe in tow. Alongside two of New Wave brightest stars, with a raft of Power Pop winners in their set and major label backing, it didn’t look like Bram Tchaikovsky could fail. Their next single, penned by Boyce’s ex-Heavy Metal Kids bandmate Ronnie Thomas, was an absolute pure Pop pearl entitled Girl Of My Dreams. Thrilling, heart-rendering and evocative, it was a breathtaking piece of work. Although somehow Girl failed to make the UK listings, it did reach number 37 in the Billboard charts in the US, the home of Power Pop. In fact the booklet states it may have gone higher, bar a cock-up by Polydor, Radar’s American distributor.

Soon the debut album Strange Man, Changed Man emerged, clad in a stylish Rocking Russian sleeve. They even managed to rope in Mike Oldfield to play some tubular bells, but don’t let that put you off! Despite the craft that was on show, again the album failed to make an impact in their home country. Listening to Strange Man today, it has worn fairly well and the good songs sound very good indeed. Any Motors fan interested in what one of the old heroes was up to would not be disappointed, as this was like the natural follow up to that band’s first album, more than their actual second LP in truth. There is a slight dip on side two, with Lady From The USA sounding like a parody of a drippy trans-Atlantic love song (perhaps it was?) and the cover of the Neil Diamond/Monkees chestnut I’m A Believer is a bit naff.

The record starts out in great form though with the beaty Robber and another Ronnie Thomas song, Lonely Dancer, which fits in with the band’s cunning update of the Who for the New Wave crowd extremely well. The melodramatic title track is another goodie with again a touch of Who and Bloodline rocks pretty darn hard. The album version of Sarah Smiles marks the sweet spot between Hard Rock and Power Pop effortlessly and album closer Turn On The Light ends the album in similar style with a bit of Boogie style thrown in too.

The bonus tracks appended to Strange Man round up the singles and a couple of early songs that never made the LP in Rock And Roll Cabaret and (Who Wants To Be A) Criminal. The singles show that when BT were in the confines of the major label studio they simply added more guitars, making the sound mighty. The more austere early versions work well though and Criminal is a masterclass in restrained Power Pop.

What may have contributed the Bram’s lack of a breakthrough in the UK with this record may have been to do with the inverted snobbery that was around in 1979-80, which as a 13/14 year old at the time I’m really rather ashamed to say I may have been a party to. You can hardly spot it today, but on the more “Boogie Rock” numbers like Bloodline and Turn On The Light they do sound a little like a New Wave Status Quo. Not a problem these days, but back then 1980 you might as well be wearing flares and opining that Clapton Is God to the NME, Sounds and the others. If I had read a review comparing a band to Rossi and Co back then I have to put my hand on heart and admit that it would have put me off. Silly young me, because although Strange Man Changed Man is somewhat a tale of two sides, (with side one being full of perfect Pop belters including the title track, I’m The One That’s Leaving and that classic single) it was well worth four quid of anyone’s pocket money.

For album number two The Russians Are Coming (retitled for America as Pressure) Bram Tchaikovsky (the band) toughened up things a little, with a couple of the tracks verging on Heavy Metal. You couldn’t blame them really, as they had experienced a taste of fame in the US and that country has always appreciated a band that could Rock. This was another good effort, with some great harmony singing in places. Lets Dance (no not that one) is a killer opener, all crunchy guitars and bags full of infectious energy. Mr President tends towards Hard Rock/Metal, as does Jeux Sans Frontieres (Game With No Rules), but they always retain their Pop nous. Maybe The Russians…doesn’t quite have a high like Girl Of My Dreams, but it is probably a more consistent LP.

Among the bonuses on this second disc we get the 60s-tinged Come Back and the out of character but atmospheric piano ballad Amelia, which showcases the combo’s considerable vocal talents. There are also single versions and a live take of Whiskey And Wine, nicely completing the picture of the band in 1980. A curve ball is presented in the form of a French version of Mr President, presumably recorded to capitalise on inroads they were making on the continent.

On 1981’s Funland, the final Bram Tchaikovsky LP, the band seemed to revert to the more understated style of their first singles. There are still some chunky Pop wonders on show though. They replicate the formula of I’m A Believer from the first LP on their cover of the Northern Soul classic Breaking Down The Walls Of Heartache, but for me this one works a good deal better. The wry Why Does My Mother Phone Me? is a really well-observed piece of song-writing, a little in the Wreckless Eric mode but that’s not a bad person to be compared too at all, an excellent piece of work. The jangle of Stand And Deliver is good too and Miracle Cure is a lot of fun, a neat pastiche of 50s Rock & Roll. As a glance back to Bram’s recent past in the Motors, they do a nice version of Soul Surrender.

In recognition of the changing times, there are little flashes of synths edging themselves, it gives a more contemporary feel I suppose, but the songs didn’t really need it. I have to say though Egyptian Mummies really manages to combine everything together pretty well, touches of Heavy Metal, stop-start riffing and electronica….really very good. The only song that the electronics are a bit obtrusive on is bonus track Solid Ball Of Rock, which after a New Romantic bit of atmospheric keys settles down into the kind of straight-forward Rock that Saxon could cover (and they did).

After this Bram quit the music business almost completely (he operated a recording studio for a few years, but did not record himself), understandably ticked off with the lack of success and the constant merry-go-round. As mentioned above, he does play some low-key gigs these days, which is super to hear.

Bram Tchaikovsky and his musical accomplices presented some sterling work during the three year documented on this new compilation, which sadly went under the radar (if you would excuse the pun) mostly. Their muscular version of Power Pop was well suited to USA, it was a wonder how they didn’t go on from their initial success there to greater heights, but lack of record company backing and changing trends probably played some part. Nevertheless they managed to conjure together three sets of, on the whole, very enjoyable Pop Rock. They had most of the attributes aboard to have made a breakthrough during the New Wave years.

Collectors of the music of that time will be please with the emergence of this release, with Funland never having been reissued on CD and The Russians Are Coming being long out of print. This is a goldmine for those addicted to those heady highs of the sound of summer – when Bram got it right there were few better at this kind of thing.