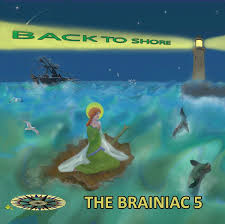 The Brainiac 5 – Back To Shore

New album by the long running psych/punk/folk titans, the follow up to 2017’s Journey To X….the bulk of the running time here is taken up by the four part title track…..Ian Canty sets the controls for galaxy weird and zooms off to planet Brainiac……

I reviewed the Brainiacs’ delightfully deranged Journey To X here, which should also give you a bit of background on the band. Since that record came out in 2017, the band have been beavering away, gigging regularly and working up the new set of material which makes up this brand new LP. It looks like they are still wending their merry way on these eight tracks, four of which make up the title track/saga Back To Shore.

Setting things off on a punchy note is energetic rocker Long Enough, which is all choppy chords and spiralling synths, ending up as a great big bundle of fun. This is followed by the more meditative strains of the folktronica-tinged first part of Back To Shore. Subtitled A Woman’s Work, fittingly enough it has some great female vocals by Chrissy Quayle. It also has a prominent Jew’s harp and an odd electronic bubbling sound, not outstaying its welcome even after nearly nine minutes.

The second part, This Way, starts with church bells, but soon settles in with a bright folk motif. Somewhat incongruously, it features a ragga rap from Oxman upfront, but it does really work with everything else going on. A bluesy guitar and harmonica join in, there’s a lot afoot. Then the folk influence reasserts itself halfway through, with bagpipes, a touch of the Orient and a floating saxophone, into more or less a winning Folk Pop song.

Moving onto the third item in the Back To Shore series, Tribute To Alex Ward utilises some very metal guitar soloing juxtaposed against pipes and drums. The concluding section, the lengthiest at more than 12 minutes, goes back to the church chimes again and then has an almost 808 State kind of house beat. It goes onto dip nicely into World and Folk music genres, with the jazzy sax making another appearance and the female vocals again are spot on.

Although the Back To Shore concept pieces are very well done, personally I yearn to hear a Brainiac 5 album that, instead, plays to their strengths in composing catchy and well constructed songs. What We Can is a sparkling example of modern pop/rock that would make a great single, it very much beating REM at their own game. Memorable and appealing without sacrificing their in-built strangeness, it is a joy. They finish with Breaking Up, which is tough and punky, providing a strong end to the LP.

One thing I’m not overly keen on is the amount of guests playing on the record. This kind of thing always seems to take something away from the original band.  I realise that The Brainiac 5 put together pretty complex pieces of work that now call for extra instrumentation, which is great, but 11 guests contributing is a bit too many for me. Having said that, they all acquit themselves well and only add to the LP positively, if on occasion it is hard to get away from the feeling of slightly over-egging the pudding. Sometimes I wish they would just keep it a little simpler, but then again, that is not really what the Brainiac 5 are about – I should just accept them for the rather extraordinary combo they are, I suppose. My failing, not theirs.

Those reservations aside, as a whole, Back To Shore is a skilful example of the mix-up of prog/punk/folk that the band pioneered, with many snappy tunes and diverting lyrical concepts. Perhaps not as instantly pleasing as Journey To X, but still a compelling artistic work of much depth and invention. The Brainiacs obviously live in their own self-contained world and we are lucky enough to get a brief glimpse of into it now and again. A rewarding listen, given time.