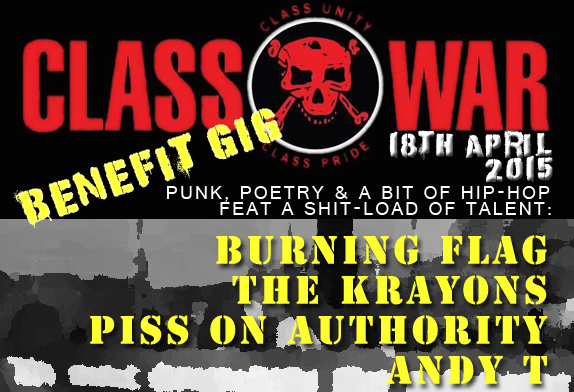 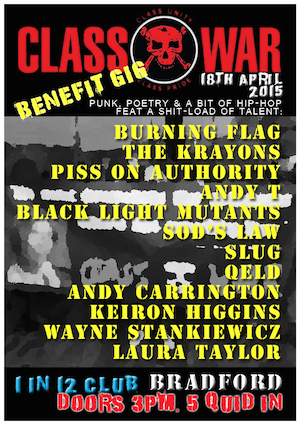 Class War is Coming to Bradford in April with a Load of Angry Punks and Poets. It’s Gonna be Loud and Dirty. Our own Andy Carrington (full disclosure – he’s on the bill and is one of the organisers) previews the gig.

April 18th, 2015: a day of punk, poetry and even a bit of Hip-Hop to raise money for the political party Class War. More info on the Facebook event page.

There is a class war waging and we are losing it. The rich are getting richer and the gilded elite who have ruled us since Norman times remain in power and dominate land ownership just as they did when they first robbed it. We live in a feudal society dominated by an oligarchy of privately and Oxbridge educated toffs who run not just the government, banks, diplomacy but the media, music. comedy and even the opposition. We see no difference between any of the parties – we oppose Tristram Hunt with the same venom we hate Zac Goldsmith. We don’t want to kick the Tories out to replace them with Labour or any variety of failed Trots. We don’t want to kick them out at all – we want to kick them in!

Started in 1982 CLASS WAR was first a combative, funny, populist anarchist newspaper then it mutated into a similar political organisation. We are proud of our past. But 30 years later the same approaches do not work. Endless photos of overseas riots and balaclaved anarchists bring no movement here. The same old same old is getting us nowhere. Time to think and do the unthinkable, to cross the Rubicon.

We are standing Class War candidates in the general election on May 7th 2015. We are doing this to launch a furious and co-ordinated political offensive against the ruling class with the opportunity an election gives us to talk politics to our class. We in no way see the election as an alternative to direct action. By the brick and the ballot.

We are not talking community politics here. It’s too late for a patient slow-build like the IWCA. The ruling class have us by the throat – they need a short sharp kick in the bollocks. Our election campaign will use any means necessary. We won’t be ushered away by PR minders – we will make ourselves central to the campaign in a funny, rumbustious, combative and imaginative way. We will be on the streets and in their faces.

Class War: Because all other candidates are scum.

The Class War benefit gig is being arranged by Andy Carrington and Steve Blackman.

Artists performing on the day include a shit-load of talent from around the UK: