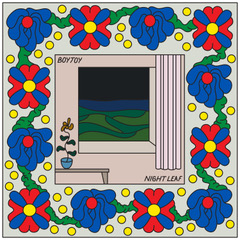 The first “all-girl” band I ever loved were Josie & the Pussycats... and for some bizarre reason listening to Boytoy dredged up the memory from 48 years back!  By some kind of freaky coincidence one of Boytoy mention the fictional animated band in an interview here!

I only got this album because one of La Luz was involved – and I’m infatuated with them- their sound/songs/music that is – I’m not some weird stalker. They sound nothing like La Luz at all though.  Well, maybe a tiny bit on one song.

On first listen I kinda thought ‘Meh!’ Mentally noted they reminded me of the Bangles – but more laid-back, the Waitresses – without the ‘novelty’ songs, and that All the Leaves are brown and the sky is grey song by the Mamas and the Papas  They sound like a garage band who started off with the Velvets ‘Loaded’ as their main inspiration but dig a bit of  Gram Parsons and alt-soft-rock as well.  Not really my bag.

Boytoy is a summer-time strut down a New York City sidewalk as the sun slips behind the horizon where cement meets the shore and waves crash on pavement. Their sound ebbs and flows between natural harmony and destruction—embodying the bright grooves of the 1960’s with heavy guitar riffs snatched from the Lower East Side of the 1970’s.

After a couple listens, an unexpected bit of hot weather engulfed the South and bus-journeys to wage-slavery became a joy with Boytoy as the soundtrack.  Lazy, nasal Noo York vocals, a lackadaisical groove -part Velvets, part Headcoatees, part-I dunno .. but it just seemed right.  The titles  New York Rip Off, Static Age and I Get Distant made perfect sense.  This is music which doesn’t seem to Try-Too-Hard, And it’s Easy-Listening but With Atitood.  That was  when the Josie & the Pussycats thought entered my head…. something to do with a travelling girl-band having adventures… one song Juarez  finds them “In an RV/straight thru Texas / to El Paso / where the show is… and inadvertently over the border into Mexico.  Then they’re in New York, “with a backpack full of stuff that I carry around” until they are ripped-off….

Asked what their song lyrics are about in the brilliant soundigest interview from last year, Saara  replied with a superb soundbite.

“Dreams, loves, flings, current events, the human and the mundane. Anything that tickles our pickles.”

That should be the title of the next album…. OK, maybe it’s a bit too long. Here’s more proper info.

I like it when an album which seems ordinary and laid-back worms its way into your consciousness and becomes extraordinary and groovy.  Boytoy give the impression they are slackers or stoners who have accidentally made a great record, but it’s probably part of a subtle masterplan.

It’s a fine, fine rock’n’roll album, but the closing ‘Cold Love’ – a six minute epic, is a classy piece of timeless, tearjerking songwriting, worthy of the Brill Building greats. (I don’t believe in cryin’ no more …. But I do… wish the best for you). Mellow enough to be a Radio 2 hit, but cool enough to be taken to the hearts of hip-kids and lovers of rootsy-retro cool.

Night Leaf is an album which will fall under the radar of most popular culture commentators as it was made for love and for fun rather than for money and sales….. but, get these songs on the radio, TV and it would be the beginning of a new golden age for proper Pop music.

Listen and then buy here………