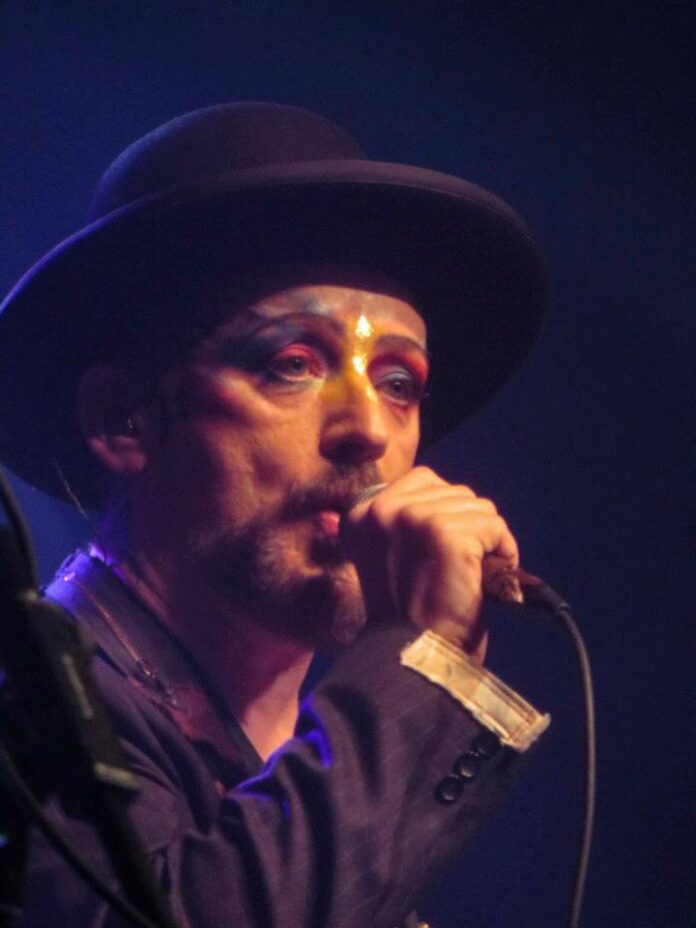 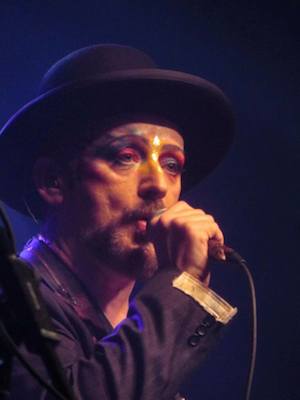 Back on the road again after the release of his latest album, ‘This Is What I Do’ and a November 2013 tour, Boy George hit the stage of the Ritz in Manchester on Monday. And while the famous ballroom was hardly packed to the rafters, those in attendance experienced a great show from an artist absolutely back at the top of his game.

It was a long set, which at just over two hours provided songs which spanned the complete gambit of George’s career; from the massive hits of Culture Club, to his solo work via several covers and a numerous musical styles.

Opening with the reggae-tinged sound of ‘Play Me’, complete with rastaman/scat inflections from the front man, George grooves his way around the stage, clearly happy to be there and enjoying what he is doing. So much so, that at several points during the show he deviates from the planned setlist, telling the band what to play as they go along. The three-piece brass section even coming on stage at one point, only to be dismissed again as he had chosen to do different song.

Introducing ‘Live Your Life’, he can’t resist mentioning the newly-legalised gay marriages, “Not something I’m interested in doing”, he smirks, “But I can’t wait for the gay divorces”.

The first of the hits, the Bread cover ‘Everything I Own’, which gave George his first solo number one, is greeted with rapture from the audience, who sing along in unison.

Before playing ‘Make You Feel Your Love’ (the Bob Dylan song covered by Adele) he informs us it’s on the American-only version of the album before cheekily suggesting, “you can probably get free off the internet, if you haven’t already”. His voice suiting the soulfulness of the song as well as any of the up-tempo dance songs. This leads to a rendition of Barbara Lynn’s jazz classic ‘You’ll Lose A Good Thing’, and the energy is raised once more by ‘My God’, the last single.

By the time ‘Church of the Poison Mind’ is played, the audience, made up of fans from all ages, genders, and orientation, are enthralled. “Let’s go back to 1982” he teases, “Not physically obviously, we can’t do that – even I know that” before launching into a bluesy version of ‘Do You Really Want To Hurt Me’. It’s not the only classic which has had a make-over, ‘Karma Chameleon’ is played as a stripped down reggae treat, before bursting into T-Rex’s ‘Get It On’. Even those without faith found it hard not to join in the triumphant Hare Krishna refrain from ‘Bow Down Mister’.

Ending the show with just keyboard player Mike Gorman in the spotlight, he croons through Louis Armstrong’s ‘What a Wonderful World’ and an emotional ‘Victims’, before bidding us adieu, and the crowd leave happy.

One thing that comes across is George’s voice is in as good, if not better shape than ever. He also appears to be having a lot of fun, which for an audience is infectious. With his well publicised troubles and fall from grace hopefully in the past, this newly invigorated George could be well on his way to a reversal of fortunes.

The tour continues with several UK dates later this week, followed by Europe and USA shows. Go to boygeorgeuk.com for more info.