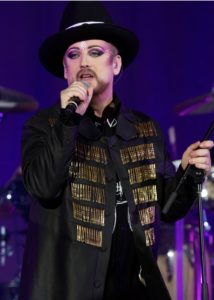 Amidst the illuminated tapestry of the crudely macadamized sea-foam-green-colored turf and cemented asphalt lies a barrage of multi-chromatic, bee-hive hair-doed, screaming and excited fanatics, all waiting in breathless anticipation… Then suddenly the stage becomes dazzling in a vivid purple and the audacious master himself, Boy George, appears like a raging tsunami dressed with flamboyant confidence. Salaciously fluorescent in a kaleidoscope of vibrancy, Boy George and Culture Club orgasmically capture the essence of David Bowie in a sparkling performance of Let’s Dance. Somehow Boy George knows that the world had been a safer place with Bowie in it.

Boy George continues to magnify the stage and seduce the crowd with his Reggae/ Funk, Pop, Punk effervescence, illustrating each song as the set list demands. He sonically satisfies the congregation’s wishes with 80’s gems including: I’ll Tumble 4Ya, It’s a Miracle, Time (Clock of the Heart), and The Truth is a Runaway Train…. He continues to tantalize the audience with his velvet voice singing Do You Really Want to Hurt Me, one his most compelling compositions. The riveting Church Of The Poison Mind further enthralls the already elated fans.

Emerging during the English New Romantic era in the 80’s, Boy George was greatly recognized for his Blue-Eyed Soulful style and his androgynous appearance. He and Culture Club quickly became global sensations and MTV icons. Winning the Ivor Novello Award in 2015 for his outstanding contribution to British music, George O’Dowd is also an accomplished fashion designer, author, actor, DJ, and remains a microcosm of eternal sunsets in the most glam rock way possible. 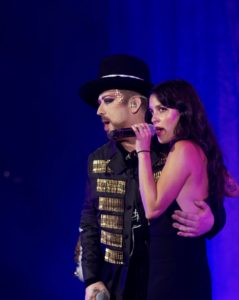 Supporting Boy George and Culture Club is the fiery red-headed frontman and co-founder of the 80’s band Thompson Twins, Tom Bailey. The electro-synth-pop British anomaly produced a string of hits including Hold Me Now, Lies, Doctor! Doctor, Lay Your Hands on Me, and Bailey has just released his first pop album in 25 years entitled Science Fiction. He quickly engages the audience as they dance to his music amidst the heat of the day.

The B-52s are also part of the tour, and probably one of the most danceable New Wave bands on the planet featuring Fred Schneider, Kate Pierson, Cindy Wilson and Keith Strickland. They rock the house with their thrift-shop aesthetics. The crowd dances in the aisles to Roam, Rock Lobster, and Love Shack, as well as a host of other tracks bound by their trade mark sound. 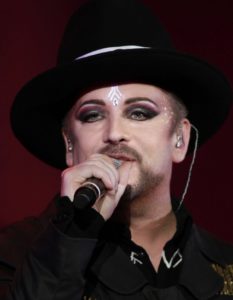 The climax of the evening manifests itself like a fierce volcanic eruption as Boy George performs the whimsical, euphoric glam-pop, anthemic track Karma Chameleon. This is certainly one of the most decadent extravaganzas of the summer concert series, and nearly a life-changing, must see, spectacular.