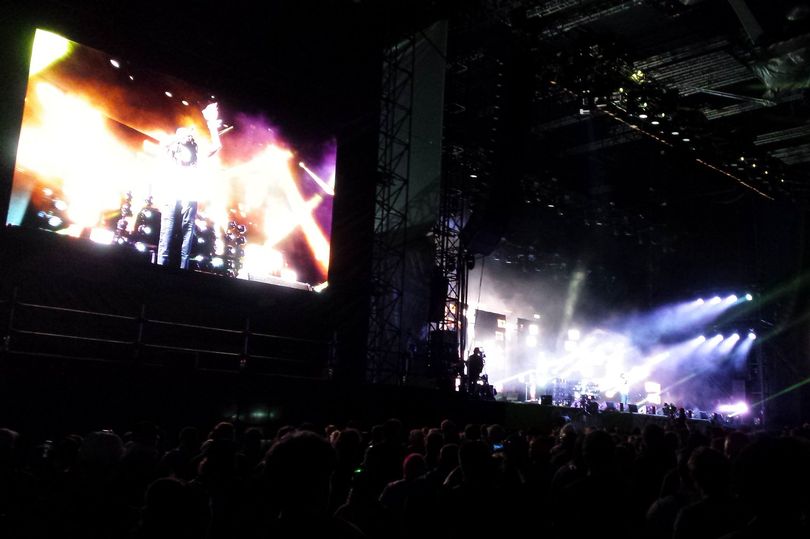 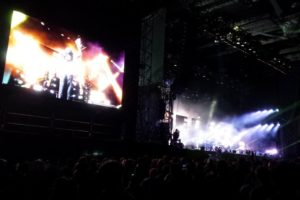 There is perhaps the best light show in history, like a cranked art institution from a cutting edge gallery stretched onto huge screens and blasting out a mix of red grey and black in sheering cascading light, multi hi pixel screens with tough urban images flickering on and off and matching this one hour, multi artist demonstration of all that’ s great about grime.

In front of the high pixel, hi tech screens is DJ Maximum cranking out beats and tracks, those multi rhythmed, shape shifting beats that are at the true cutting edge of music and culture, complex rhythms that are a whole new constantly evolving territory and ever mutating in the decade of grime’s evolution from London inner city beats to the pulse of the new generation and part of the mush mash of music and styles that soundtracks the new generation take on pop culture.

The harsh electronics with heavy bass lines backdrop the twitching, twisting, electronic shrapnel as a crew of grime artists machine gun their words fronted by the charismatic Skepta and his searingly honest words. This headline slot is a key moment and the all stops are pulled out in a big show that seizes the moment.

Moments like this are youthquake moments. An underground culture is now mainstream with no compromise. And this festival has taken the chance. Glastonbury is now central to British youth culture. Those that moan that it’s not like the old days are missing the point. It’s not meant to be about the old days. Moving forward is not always that painful and diversity is the key to new generation pop culture and more than anybody Boy Better Know represent this.

Skepta bosses the show in his bucket hat and smart casual owning the stage with on and off contributions from crew members Frisco, Jammer, DJ Maximum, Shorty, Wiley and JME.Playing the same time as Ed Sheerin who is doing his thing on the main stage underlines Glastonbury’s massive reach with its arms around all pop culture,

Maybe far more than Radioheads brilliant Friday set or other highlights it is perhaps grime that was the true story of this year’s glastonbury. of course it’s been represented before but this year the form seemed to be everywhere with its heavy bass and twitching energy everywhere. On a myriad of stages there were the likes of AJ Tracey, Nadia Rose, 67, Mist and Dave on the Sonic Stage on Friday, Fekky, Jaykae and Ms Banks at The Blues on Saturday; P Money, Abra Cadabra and Rejjie Snow at the Wow! Stage and Kano making a Glastonbury return to the Par and Dizzy Rascal – who is now veteran- call out for more black and urban music at festivals is being heeded and can be expanded upon.

Boy Better Know sit somewhere in the centre of the scene with the plaudits and the gongs and the creativity from Skepta’s soul searching and his brother JME’s fast and fidgety delivery which really coalesces on the wonderful 96 Fuckeries – a grinding, heavy duty, slow groove. The contrast between the brother’s styles is complemented by their entwining of their performance. This is part and parcel of the whole BBK ethic with various member tunes that are signposts in the culture and live their show is mind bombing from the heavy bass riffs to the shrapnel rhythms that zigzag out of the huge PA. Add to this the weird keyboard slashes and the lyrical content spat out with a vein bulging intensity. It’s powerful stuff but not without humour like JME bounding across in his snow boots referenced in his lyrically dense Work, a song so full of British cultural reference points that it’s like a 21st century Kinks dripping with the first person observational that has always been so perfectly British no matter what the style of music.

Boy Better Know bring the party and its an intense affair. A powerful reminder that beyond the fringe, deep in the bowels of the inner city there is a forever changes version of music culture documenting 21st century life with an imagination that is in fast forward and free from the rules and regulations of music culture. This no holds barred creativity is what makes Grime so thrilling. Few music’s operate beyond convention and with its multitude of ideas and styles this is a music that is wild and free and the Boy Better Know performance tonight is another step to their eventual rightful headline slot on the Pyrimid stage.
If Jeremy Corbyn was the Elvis moment at this year’s Glastonbury as he took the applause from a new generation then the plethora of acts on the bill was a triumphant sign that future has shifted.

There is a new generation in town, with a new narrative and new beat. Musically, politically and spiritually things are very different and Generation Why Not is writing its own rule book with Glastonbury being the accurate barometer of the new. The 50 year old festival with its diverse bill and its forward thinking attitude is somehow smack bang in the middle of pop culture that terrifies the Farage and Daily Mail set. You can smell the elder critics stale beer breath sneers from miles away when Corbyn attracts the biggest daytime crowd in the festival’s history and god knows what they thought of the twin godhead soundtrack that defined this year – the ‘Jeremy Corbyn’ chant set to White Stripes Seven Nation Army riff and the powerful impact of grime that was elevated to mainstream by some of the most daring and thrilling booking of any festival in Europe.

In the past few years Glastonbury has been pilloried by those anonymous comment types in the Guardian etc for daring to stretch out of its perceived remit by putting Metallica or Kanye on the main stage and this year with the Boy Better Know crew owning the headline slot on the Other stage – the second biggest stage at the festival – there was a defining generational shift with the older facebook grumps scratching their heads in disbelief as they sank into their armchairs at home whilst the youth danced to the complex and brilliant Grime beats in the Glastonbury haze.

Instead of hanging onto the past Emily Eavis, Nick Dewey and the Glastonbury team are taking risks and moving forward and its all working. Boy Better Know’s stunning performance was this new generation Glastonbury personified and proof that so much music culture, even if its hatched in claustrophobic inner city basements can thrive on the main stage.

The Sheeran’s horrible “cover” aside, it’s pretty clear to anybody right now that grime, and UK rap more broadly, provided some of the most memorable sets of this year’s Glastonbury. Fekky, Jaykae and Ms Banks at The Blues on Saturday; P Money, Abra Cadabra and Rejjie Snow tearing things up at the Wow! Stage on Sunday too, while Kano made a Glastonbury return to the Park. So yes, for all that Glastonbury is criticised for becoming an “everyman’s event” where basics trudge back and forth between a beer stall and their camping chairs parked at the Pyramid Stage, Emily Eavis and her team’s moves towards booking both rising and established MC talent can only be a good thing. Watch BBK here and Stormzy here and feel blessed to be alive at a time when grime can command crowds of thousands at the most famous music festival in the world.
S