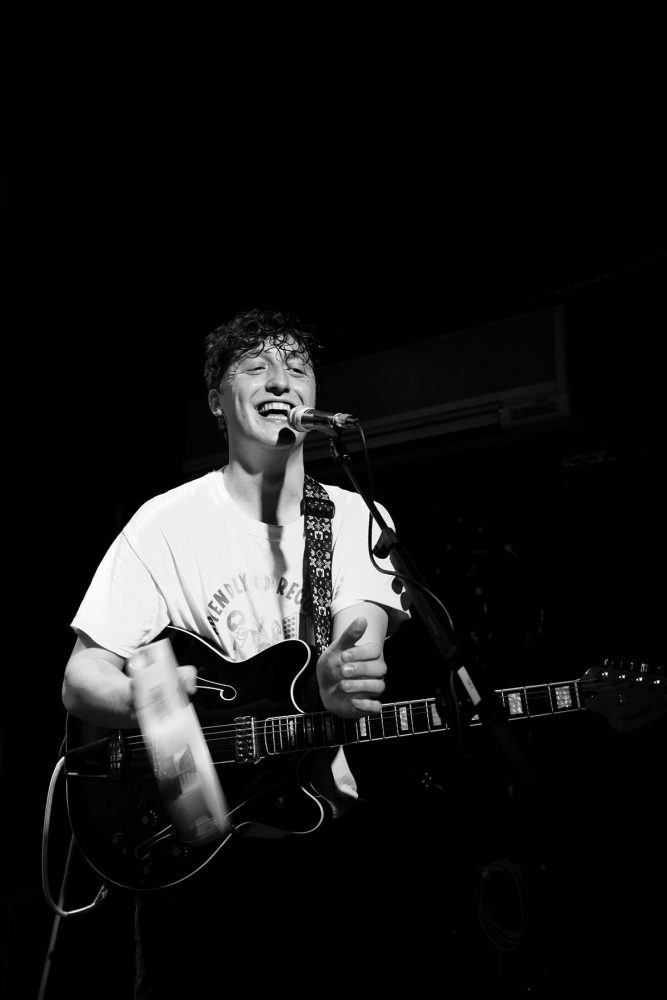 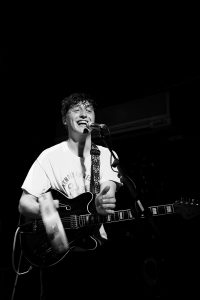 I covered the preview of Boy Azooga’s stunning debut album back in April. The band have since announced a nationwide tour and are all set to appear on the prestigious BBC music programme Later…with Jools Holland. Matt Mead sat down with band leader Davey Newington to discuss all things including favourite dogs!

LTW: Can you tell us a bit about your upbringing? Where were you born, first memories?

DN: Hey! I was born in Cardiff and have lived here my whole life. My earliest memories are of not wanting to be at nursery. I loved being at home, drumming along to Queen on a biscuit tin with cricket stumps.

What was the first music you remembering hearing?

What was the first song you bought? Was this a download?

I’m pretty sure the first song I bought with my own money was a CD single of ‘Who Let The Dogs Out?’, by Baha Men, in HMV in Edinburgh

My Dad is an Alfred Hitchcock/Bernard Herrmann obsessive and those films and their music was always playing around the house growing up. I remember hearing those scores as a kid and being freaked out. I love it now

When did you decide to learn the guitar? Who influenced you to play? Who were your musical influences at this period?

My sister loved Phoebe from ‘Friends’ and her songs, so she asked for an acoustic guitar one Christmas. I used to mess around on it when I was about 12, but I was obsessed with the drums and that’s all I cared about. I then saw Paul McCartney playing this finger-picked song ‘Jenny Wren’ a few years later on a documentary and was properly inspired to learn guitar. I had drum lessons from when I was 7, but with guitar I just sat in my room and taught myself, playing Beatles and Nirvana songs for hours. My friend Jack from Monico Blonde is an incredible guitar player and taught me a lot.

How did you go from learning and playing guitar to forming Boy Azooga? Were you in any other bands prior to Boy Azooga?

Yeah, I played drums in lots of projects prior to doing Boy Azooga. I played with Houdini Dax/Monico Blonde, Keys, Charlotte Church’s Late Night Pop Dungeon, Gulp, Babezilla and lots more! While I was doing this I would record my own songs up at Eddie Al-Shakarchi’s house, who is an amazing musician and producer. Once we’d finished making the record I decided to put a band together and got three incredible musicians in Daf, Dylan and Sam to help me do it live. We did our first gig in December 2016 and we’ve gone from there. I’m still learning how to do the whole guitar/frontman thing and it’s a bit weird, but it’s lots of fun for sure!

Did Boy Azooga release any material before signing to Heavenly?

We did a split 12″ EP with an amazing band called Buzzard in Cardiff, on this class label called Bubblewrap Collective. I also posted a couple of the tracks on SoundCloud before our first gig…

How did you get signed to Heavenly? The home of such great bands as Flowered Up, Saint Etienne and The Orielles.

I got really lucky, Heavenly was my dream label. I owe a lot to Mark Thomas from Islet/Farm Hand/Shape Records. He happened to come along to an ‘Azooga gig I put on at The Transport Club in Cardiff. He seemed to enjoy the gig and then I bumped into him where I was working the following Monday morning. He knows Jeff Barrett, who runs Heavenly, because he used to manage H Hawklike, who is signed to the label. He sent Jeff the Loner Boogie video and he was into it. There was a bit of back and forth and then one day I got a call from Jeff while I was walking to work. I’ll never forget the phone call: one of the songs on the record has a lyric that goes ‘ ..on the train to Brighton’ and he said “Davey, I’m on the train to Brighton to see King Gizzard and I’m listening to your album, you just sang ‘on the train to Brighton’. I wanna put your record out!”. I was over the moon!

How did the recording of the album happen? Did you have a bunch of songs that you had demoed and that you had a clear plan on how you wanted them to sound on record? Or was there any element of jamming in the studio?

I was introduced to Eddie through a friend and we quickly hit it off. The whole record was made in his home studio. I wrote and played everything on the record apart from the strings that my Dad did on ‘Jerry’, ‘Hangover Square’ and ‘Breakfast Epiphany II’. I obsessed over the record for a few years, kept notebooks etc and would stay up recording at Ed’s till the early hours. Ed is incredible, he’s such an integral part to the sound of the band and record. Now that we’re more of a band we jam in practice and that is shaping the songs for LP2, which I can’t wait to record with the boys this time around

How do you write songs? Do you have an idea and jam out how you want the song to sound and then introduce to the rest of the band? Are any of the songs band collaborations?

I always try and write a song so that it can work on just guitar or a keyboard, then I think it can stand up properly as a song without decoration. I write on my own and then take it to the studio or to the practice room and we flesh it out. 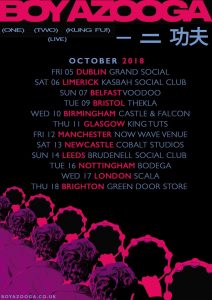 You have a nationwide tour, including in store Rough Trade signing sessions, starting at the end of the year. Are you excited about going out on tour? What do you enjoy the most about touring/playing live?

I love being on tour. Having spent so long in the studio, it’s so exciting to get out there and get an immediate reaction from people. It’s so cool to notice that some people know the songs too. We’re still pretty new to it all but we’re loving it

Who are you currently listening to and who are your current influences?

I’m obsessed with this record by Jim Sullivan called UFO. Tom from Friendly Records in Bristol turned me onto it. I bought a David Axelrod LP there, who I love, and he said if I liked Axelrod’s music I would love UFO. It’s got Earl Palmer and other Wrecking Crew players who played on the Axelrod stuff. Jim Sullivan disappeared a few years after releasing it and people speculate that he was abducted. I’m not sure about that, but the whole record has a proper haunting feel. I’m also loving a song called ‘Falling In Love’ by Surface, it features Karen Copeland on vocals, amazing track. Lots of Oh Sees, Stella Donnelly and Gokcen Kaynatan too.

Finally, and a bit of a homage to your great track Jerry. What is your fav breed of dog?

Gotta be a Springer Spaniel, like Jerry. Jerry Springer. Thanks for having me!