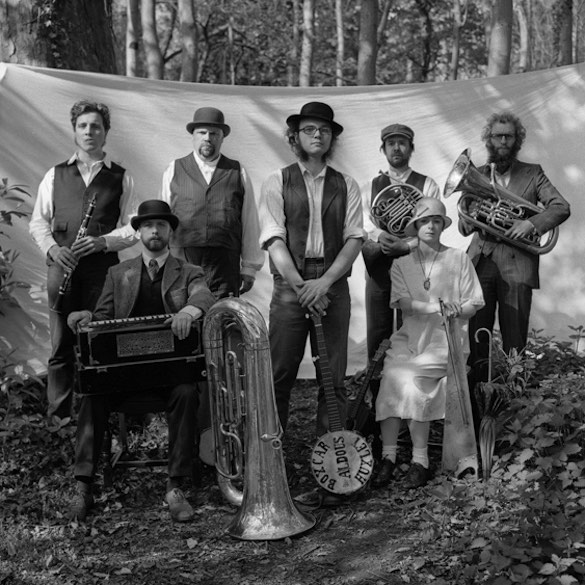 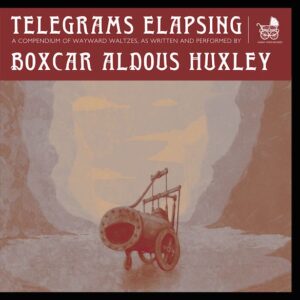 Boxcar Aldous Huxley are an eight strong ensemble who play non-traditional folk music with an unwavering aplomb. Their sound is close to unique and and thoroughly enjoyable. The new album by them was officially launched on Friday – check out Jon Madge’s review, along with a stream of the album, below.

The name alone should give you an idea of what kind of band Boxcar Aldous Huxley are (that sentence applies equally well to the latest album).

Boxcar Aldous Huxley are steampunk in the way the word was originally used, their sound is that of a fictional past dreamt up in a future that we should all pray to high heaven never happens.

Fans of their previous releases will know what to expect from this album, anyone coming to this band afresh is unlikely to be disappointed. That is, of course, providing they like sing-along, drinking hall style choruses, folk instrumentation played in a decidedly non-folk way and an ever so slightly gloomy outlook on life.

Stories have always been Boxcar Aldous Huxley’s stock in trade, proper developed narratives with character arcs, hubris and all the sort of things that other (dare we say lesser) song-writers feel they can leave out because the finished article has to rhyme and come in under three and a half minutes long. That doesn’t even cross the wayward minds of Liam Kirby, Zuleika Gregory and the rest of the band. Most of the songs on Telegrams Elapsing clock in significantly over standard radio edit length and all of them pass through a whole load of musical styles and genres.

The density and operatic make-up of its song, does make this album more of a commitment than most. You’ll be unlikely to find yourself just ‘popping it on’. Persevere, however, and there are diamonds to be found. Sparks Over Eighth Avenue fades away to this beautiful oboe refrain, the kind of thing that would feature on an episode of Jeeves and Wooster to denote something suspicious was afoot. Opener, The Last Vestiges of a Bygone Diver, has an intro that’s like banjo’s answer to Pinball Wizard.

There are eight members of Boxcar Aldous Huxley, providing strings, woodwind, accordions and pulling the music through the band’s eclectic and varied influences as they do. On The Necessary Traits of The Industrious pulls back and forth between jazz and bluegrass influences and ends up with something that’s decidedly rockier than any of its elements warrants, while The Slow Decline of the London Necropolis Railway is pure southern gothic.

Boxcar Aldous Huxley’s analogue production and formatting suits the band, and this album particularly, well. The chemistry between the instruments and the huge ‘all together now’ choruses just scream to be performed live. Indeed, some of the songs are so steeped in drama that not fading out to rapturous applause makes them sound less good than they probably are. It wouldn’t be unfair to say the album takes on a little dose of unintentional melancholy (don’t worry, it’s lost amongst all the intentional melancholy) from being performed without an audience.

There is a tour to accompany the release of this album. My advice is to get Telegrams Elapsing and then listen to it for the first time on your way to see Boxcar Aldous Huxley live.

The album is streaming in full on Bandcamp (where you can also buy it). Check it out via this embed:

Buy the album on Boxcar Aldous Huxley band camps here: boxcaraldoushuxley.bandcamp.com/album/telegrams-elapsing. But bear in mind the album is a limited run of 250. And you are going to want the album as it’s presented with hand-assembled luxury LP sleeves.

All words by Jon Madge. More writing by Jon on Louder Than War can be found at his author’s archive.