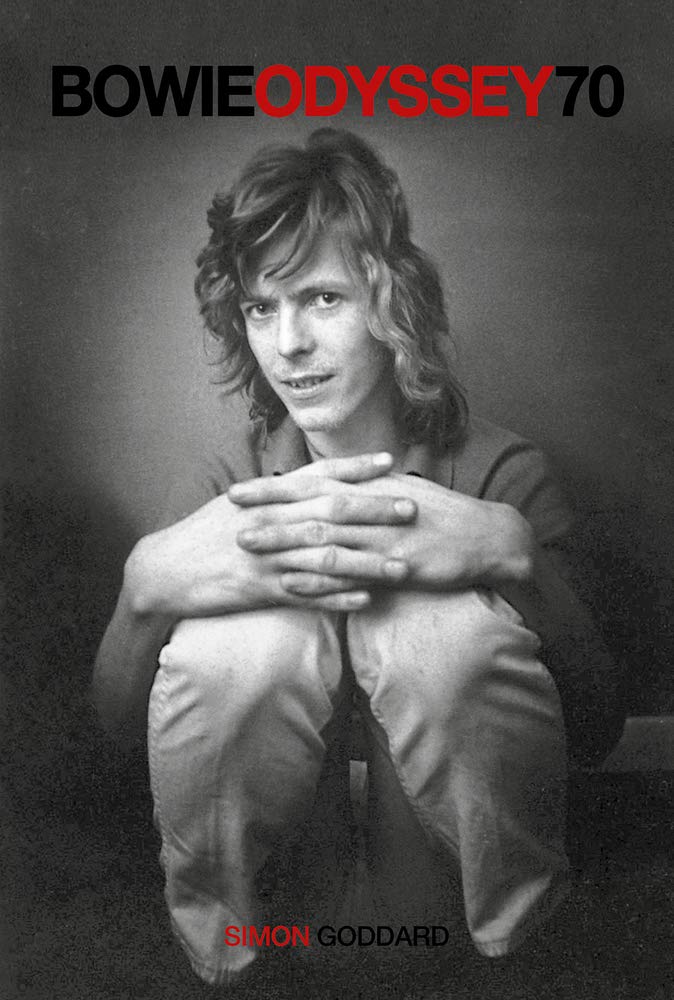 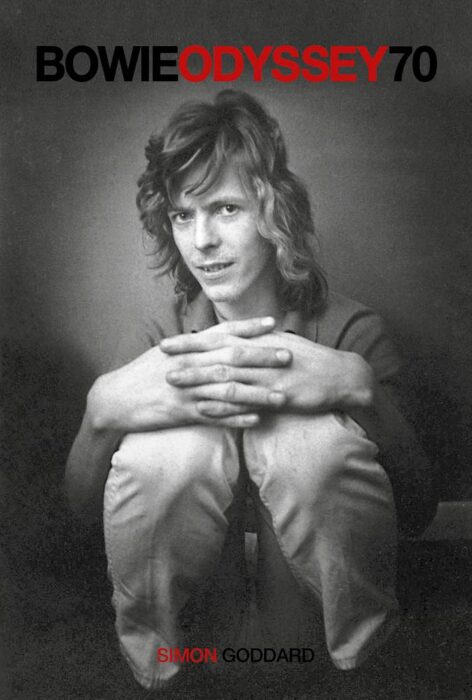 Book One of epic BOWIEODYSSEY navigates the beginnings of a metamorphosis. Music author Simon Goddard took inspiration from Bowie for his 2013 publication Ziggyology — A Brief History Of Ziggy Stardust. He now revisits the artist’s canon in an ambitious project that intertwines the evolution of an era and a star. BOWIEODYSSEY70 is the first of ten releases, one for each year of the ‘70s. The series will certainly satiate Bowie fans now bereft of their mercurial idol.

Embarking on the decade David Bowie is a recently proclaimed pop luminary, glowing in the aura of 1969 hit Space Oddity. Not least of all, Goddard’s authentic account includes deftly crafted interactions with characters around young David Jones, who facilitate but ultimately do not make the final cut of the production: Bowie The Star. Creating dialogue and a fly on the wall perspective the author’s persuasive, narrative nonfiction style lifts the curtain of illusion.

Young Bowie appears uncertain of his direction and open to influence. Demonstrating the artist’s unfocussed manifesto, Goddard details interests that range from Buddhism to Andy Warhol and the art of mime. He holds a pivotal role at elevated folk club, The Beckenham Arts Lab. Despite this broad palette, David cuts a purposeful and somewhat ruthless character beneath the charismatic, seemingly insecure exterior. Consort Angie plays a key part in building the Bowie brand; her drive an abrasive but necessary factor. Following a parallel trajectory, friend and rival Marc Bolan has a strong female collaborator in wife and manager June Child. In the context of the times, powerful females are not especially appreciated by male counterparts.

On the book cover, bearing the look of an ingenue, Bowie gazes directly into the camera lens. Further images serve to show him gradually assuming a veneer of artifice. Striking a pose, within the bookends he reclines on a chaise lounge (the blueprint for forthcoming album artwork). Across centrefold photographs David mirrors Greta Garbo, in smoking glamour mode. A vibrant colour portrait in the Autumn of 1970 captures David adorned in an electric blue, belted coat, set against a stained-glass window panel, looking to the heavens. The picture suggests an emergence from the chrysalis. Further monochrome shots that set the ambience of the times include: the streets of Soho, The Isle of Wight festival, an anti midi-skirt US protest, and recently betrothed Mr and Mrs Jones.

In a new era yet to assert its musical identity, Goddard references teen magazines and the all-important music press, garnering an expectant appetite for change. Conversely, he documents that whilst Top Of The Pops is the flagship for youth culture and linchpin of success, the hit parade doesn’t necessarily reflect this. The reader quakes at popular heroes of the year. Rolf Harris holds No 1 spot in the new year singles charts with Christmas folly, Two Little Boys, and Jimmy Saville polls third in a teenagers’ choice for local Member of Parliament. The London scene feels small and navigable but the streets themselves remain uncompromisingly challenging. Demonstrating this, Goddard does not flinch from a grim citation of homophobic violence; the order of the day.

In Flat 7, Haddon Hall in the suburbs of Beckenham, David and his conspirators craft their futures. Significantly, during the year guitarist Mick Ronson makes his first appearance in the Bowie story. Poignantly, David’s older brother John, is a shadowy and affecting character; credited as a true genius and inspiration.

Musically, in this first year of the decade, Bowie fails to achieve that difficult second hit. Despite words of encouragement in the press, singles ‘The Prettiest Star’ and ‘Memory Of A Free Festival’ don’t sell. The World of David Bowie, an asynchronistic compilation album of his ‘60s songs, also flops. A brief incarnation as leader of electric band Hype is underwhelming, although they may prove to be precursors of glam rock.

The narrative climaxes with the American release of Metrobolist in November 1970. We see Bowie’s frustrations peak as his artfully created album concept is whisked from his grasp by label men. Keeping an eye on the money, they retitle the record, ’ The Man Who Sold The World’. Furthermore, adding insult to injury, show-stopping gatefold images of David, resplendent in a Peculiar To Mr Fish blue and gold dress (his recreation of Rossetti’s Blessed Damozel), are nowhere to be seen.

Back in the UK David Bowie licks his wounds. Marc Bolan’s star is firmly in the ascendant as Ride A White Swan enters the Top Ten.

Goddard succeeds in whetting the readers’ appetites; much of the action is yet to unfurl over subsequent publications.