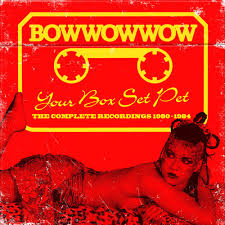 Your Boxset Pet: The Complete Recordings 1980-84

Collection featuring all the recordings of Bow Wow Wow, with both full length albums See Jungle.. and When The Going Gets Tough, The Tough Get Going, single tracks and the EP/mini-LP Your Cassette Pet from 1980…..LTW’s Ian Canty dogs their footsteps

With the Pistols implosion just a distant memory and the court case that took the Great Rock ‘N’ Roll Swindle away from his auspices concluded, Malcolm McLaren returned to the UK in late 1979 after a brief “exile” in Paris. He then embroiled himself in the career of Adam And The Ants. The Dirk Wears White Sox LP had not been the commercial success Adam had hoped for, so he hired McLaren despite (or perhaps because of) his past record in turning band members against each other and general trouble making. A good move though was the introduction of a Burundi drum album – the musicians picked up on this and forged something exciting and new. For a very short while, all seemed promising enough.

It couldn’t last. McLaren almost immediately torpedoed his reputation as a star spotter/Svengali by firing the man who would be the biggest Pop star in the country little over a year later. He press-ganged the remaining Ants for his new project Bow Wow Wow, which would utilise the exotic sounds they had developed (as would Adam with his all-new Ants). As the new band evolved, so many incidents concerning BWW seemed a direct repeat of the Sex Pistols controversy of three years before. It really started to feel like the Swindle Part 2. For instance, much like how Bernie Rhodes discovered Johnny Rotten and Malc took the credit, a similar thing happened with Bow Wow Wow’s singer Annabella Lwin (real name Myant Myant Aye). A contact called Dave Fishel, who used the launderette she worked in, gave him a tip off about this talented kid, with Malcy tacking on his “A Star Is Born” story afterwards. With the line up in place he did get them a deal with EMI and straight away set about stoking up controversy.

This time not Anarchy but home taping became the cause celebre, with the idea that this would lead to the downfall of the music industry. He didn’t seem aware that this practice was not a new concept at all, loads of people had been taping the Top 40 off the radio for years. To be fair C30, C60, C90 Go was a pretty damn fine single, breathless yes but very exciting. Flipside Sun, Sea And Piracy was more of the same, presenting a quality 45. It didn’t quite reach the heights expected though, which perhaps had more to do with the public growing tired with McLaren’s daredevil scamming than the record itself. There were vague whispers from him of anti-hyping by EMI to keep the record out of the charts, yet another re-run of the Pistols, in this case the “God Save The Queen: was it number one in Jubilee week?” thing.

It is difficult not to conclude that McLaren was repeating himself, not noticing that music had moved on since 1977, seeming to think that the only way a band could succeed was through notoriety. This was at the detriment to the considerable abilities of Bow Wow Wow, because they were a group of excellent musicians (I saw Leigh Gorman play bass a few years back…well the boy could certainly play) and when Annabella wasn’t instructed to squeal she had a very appealing voice. Just the same as with the Pistols, McLaren underestimated their musical ability and deemed it secondary to trying to use them to put across his ideas and create chaos.

Despite mild disappointment with the chart placing, Bow Wow Wow had cracked the Top 40 and the future looked reasonably bright for them. The next move pushed the tape thing even more, with the mini-album/EP Your Cassette Pet (tracks 2 to 10 on disc 3 here), which was only released in that format. This offering showed Bow Wow Wow in their early prime, with some fine music and singing outweighing the occasionally dodgy lyrics and concepts.

Sound-wise they had found their own style, which mixed in some great guitar interjections that even looks back to the early Rock & Roll days of the Shadows allied to mighty drums and extremely fluid bass lines. Also, when Annabella had a decent song she could work wonders, as the excellent cover of Fools Rush In proved. Louis Quatorze was a bit near the knuckle to say the least lyrically, but is another masterful musical creation. Giant Sized Baby thing worked well with the contrasting hollered male vocals and the calm I Want My Baby On Mars works all the better because of the sedate pacing.

Your Cassette Pet could be the definitive Bow Wow Wow recording, a snapshot that captures the genuine excitement and wonder of the band. Unfortunately it didn’t receive the reception it warranted. What may have shot the whole thing in the foot is that the record industry couldn’t decide whether it was a single or an album, eventually sticking it in the singles charts where it reached number 58 and faded quickly away. McLaren hadn’t reckoned on the fact that if you limited the format you limited sales – believe or not some music fans back then had either a cassette or record player, not both. But I suppose it all fit in with the narrative of Bow Wow Wow being outside of the music industry.

The follow up to Your Cassette Pet was W.O.R.K. (N.O. Nah, No No My Daddy Don’t), which wasn’t really a good single, though the remixed version which is also featured on this collection is a vast improvement. This single struggled into the lower reaches of the Top 75 and promptly disappeared. It looked like Bow Wow Wow’s career was over before it really started. Somewhere a dandy highwayman was heard to chuckle.

Outside of the London fashion crowd they struggled to pick up a following (a UK tour was cancelled due to poor ticket sales) and in the view of the press they were merely McLaren’s puppets, which was true to certain extent and was actually played up to in the lyrics. Previously the ex-Ants had left it to Adam to come up with the ideas, words and image and with Annabella a total newcomer, MM stepped willingly into the breach. McLaren shaped their lyrical themes, some of them very dodgy indeed, worked up during his Paris sojourn with an eye to producing a risible “rock opera”. There was also the inevitable tie-in with his and Westwood new clothing line as he was still keen to “sell a lot of trousers”.

By the time of their belated debut album (which makes up disc 1 here along with a plethora of 12″ mixes and re-cuts), they had shifted away from the Burundi rhythms and were aiming their sound much more towards joyful African High-Life and Township Jive, with of course a sharp Pop focus. Jungle Boy and Chihuahua combine to get the LP off to a great start, though the lyrics of the latter Lois Wilson quotes in the sleeve booklet were more or less directly lifted from the X Ray Spex song I Can’t Do Anything. Musically though they are both infectious and intoxicating. There a natural exuberance and vivacity to this record that is hard to dislike. Elimination Dancing is a highlight, all wild drums and frantic singing, it works perfectly.

Orang-outang has the mood of the Spaghetti Western in its dreamy guitar sound and the murder ballad/death song Hello, Hello Daddy has some pleasing touches of Funk. Nothing seems bolted on with Bow Wow Wow, all the diverse influences are mixed into present a tasty concoction of their own.

After Prince Of Darkness (a reworking of album track Sinner, Sinner, Sinner) and Chihuahua failed to do the business singles-wise, Bow Wow Wow finally had the big hit their work deserved with the catchy and gently subversive Go Wild In the Country. Around this time it seems that Boy George was primed to replace Annabella, but George’s strong personality would not tolerate merely obeying Malcolm’s orders, so it was very much a non-starter. This near-split ironically worked to bring the band together, putting McLaren on a slippery slope… Their cover of the Strangeloves’ I Want Candy hit the Top 10 just as the relationship was reaching breaking-point

By the time of When The Going Gets Tough…(disc 2, with remixes attached) the band had split with McLaren. After they had gained some actual mainstream success it appears he lost interest and with the band now representing united force, they felt empowered to stand up to his bullying tactics. This album is a lesser work, with a decent couple of singles in Do You Wanna Hold Me and uncharacteristic acoustic-tinged slowie The Man Mountain. Love Me is good as well, delving right back to Exotica for its sweet vocal sound and quaint musical setting. The 12″ inch version of Aphrodisiac is a very worthwhile bonus, with their Rockabilly roots expertly teased out. Maybe with time they would have progressed into something quite different and worthwhile, bearing in mind the swift changes and nuances they had incorporated into their sound in just over 2 years. As they split soon after the record was released, we will never find out, but they left us some unique and often fine music.

On Your Boxset Set Pet the music of Bow Wow Wow has held up surprisingly well, better than a lot of the usual 80s set. They still sound bright, original and playful and with much better tunes than you might recall. The first two “albums” “Your Cassette Pet” and “See Jungle” were excellent recordings and if When The Going… shows a band unsure of its next move (there wasn’t one unfortunately), you have to remember they were still finding their feet away from the (mostly malevolent) influence of Malcolm McLaren. Maybe given time they would have found their own muse and produced lyrics that would have matched their sometimes jaw-dropping music? I can’t answer that, but I will say that the irresistible rhythm and tunes they came up make this collection more than worthy of your attention.