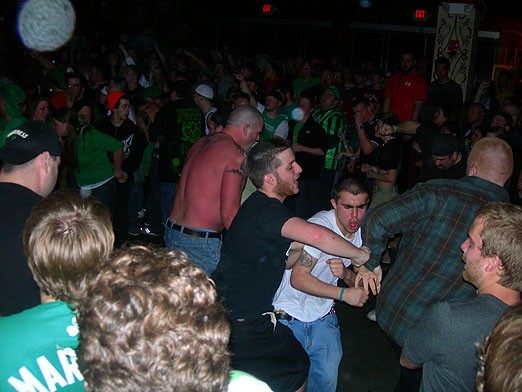 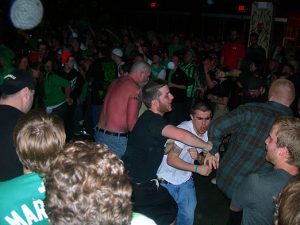 Keep on dancing… not in Boston, USA!

Police in Boston, USA have adopted a new policy to (clearly not) connect with the cities youth – they have announced that will be cracking down on “aggressive dancing,” following a performance by Flogging Molly at the city’s House of Blues venue.

The cities flagship paper The Boston Herald reports that the Police Dept cited the House of Blues for a license violation during the band’s show on February 21st 2012, where “60 concertgoers engaged in an ‘aggressive mosh pit dance,’ during which people were running and ‘colliding into each other,’ including some who were ‘knocked to the ground.'” While no injuries were reported, a BPD Inspector said the dancing “violated safety rules and the club was cited because security did not intervene.”

As a result of this the matter was presented to City Hall the outcome being that the House of Blues has been ordered to put up illuminated signs saying that moshing will not be allowed!!

Local musicians were understandably critical of the crackdown. Brian Fair of Shadows Fall said “I can understand trying to cut down on injuries or fights, but you see more fights outside a dance night on Lansdowne Street [where the House of Blues is located] than you see inside a hardcore show.”

Meanwhile, Ken Casey of the Dropkick Murphys said, when asked if the increased police attention will affect his band’s upcoming St. Patrick’s Day shows at The House of Blues, said “I don’t see it as a concern for us. Maybe in 1998 it would have been.”

Be an interesting gig, as The Murphy’s traditionally include the Boston Police Gaelic Pipe & Drum Unit into the performance; if the fans mosh to the BPD band could the Police arrest themselves for incitement?