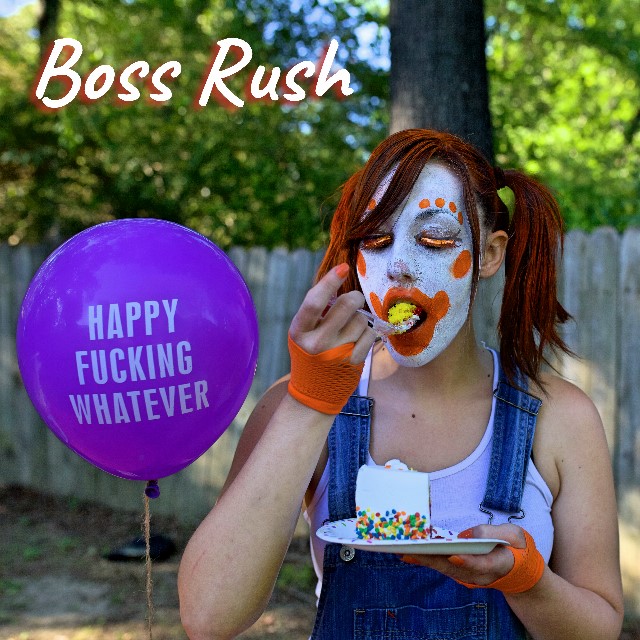 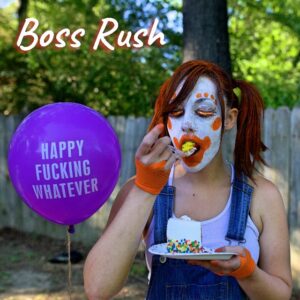 After hours stuck in a grey car being subjected to the music the kids are listening to, I was struck with a moment of clarity. A revelation that musically the soundtrack from Paw Patrol could have been released on Fat Wreck or Epitaph.

Happy fucking whatever, Here’s to nothing at all, We all gotta die someday, You might as well enjoy the fall

Welcome to the world of Birmingham, Alabama husband and wife duo Boss Rush. Eric and Daina Mason’s blast of punk cynicism skipping right over life’s honeymoon period to avoid further disappointment. An antidote to your Fleetwood Macs or Avril Lavigne and the bloke from Nickleback, that is less likely to bed in, than sneak out the back for a smoke.

As shown by a splendid home -made video which features Eric’s extended guitar intro weaving in and out of a kid’s party Pinata and truly terrifying trampoline. All of which manages to be fun whilst demonstrating an aversion to forced fun. Then his vocals arrive before seeming to be thrown down a well by the ghost of John Wayne Gacy.

Bookending this is album opener Why Bother and Coming Undone. The former answers its own question when the instrumentation drops out for a vocal reminiscent of 4AD’s heyday. On the latter, Eric’s thing with added feedback and Daina’s drum stomp, generate a modern day Dead Boys feel that continues on album closer Give Em’ What They Want.

Which should help to put Boss Rush down on the side of a long line of snidey US rock. It could be something they put in the water but might just be a general insanity that means Americans do it better. From the Angry Samoans or Killdozer and Jay Reatard there are countless names to submit as evidence.

Not to mention the criminally under acknowledged Drug Church. Something I didn’t need to do, as Boss Rush enthusiastically rubber stamped an appreciation which sometimes shares a guitar sound, but stops way short of tribute act. It being more often reflected in an outlook which contrasts with the let’s hold hands and everything’s going to be alright school of punk rock. If the last few years should have demonstrated anything, it is that it’s probably not, and Boss Rush’s nihilistic howl seems the most realistic reaction to a world gone wrong.

This is rammed home by the quick fire belters which follow the lengthier opening salvos. I’m hoping the band name comes from the video game phenomenon of kicking against the bosses’, but am convinced Call in Dead is as timely as ever in confirming a healthy contempt for work; in what should be breaking things news, the announcement of thousands more jobs at Amazon in the new industrial revolution’s satanic mills, is heralded by the powers that be in politics and the media. Call in Dead’s premise and execution captures the sort of pent up rage this engenders, while being a lesson in catchy, without the saccharine induced coma of pop punk.

If anti-work songs might have to be bad to fail, then a song called Adequate has to be better than that, and with a grunge riff to die for topped with Eric’s red raw vocals, more than delivers on its Gen X style promise. Carried along on a spiralling guitar part and Daina dueting ominously, Copy and Paste reminds us all that ‘One of these days you will be replaced’.

Listening to Boss Rush in a week that saw the death of David Graeber, sometime reluctant ‘anarchist’ and author of ‘Bullshit Jobs’ systematic taking down of westernised work, was appropriate. Their resolute independence and outsider edge seeming to tally with his view that anarchism, perhaps like punk, is something you do rather than necessarily signal, because when you join a gang you become less of either. They bring the melody without the malady, and on the song which highlights the divide by being the closest to it, asks the question ‘Have you heard my shit yet?’. Treat yourself or wait for the vinyl later in the year, and in a highly unlikely eventuality do as Boss Rush do and ‘complain’ at the places below.