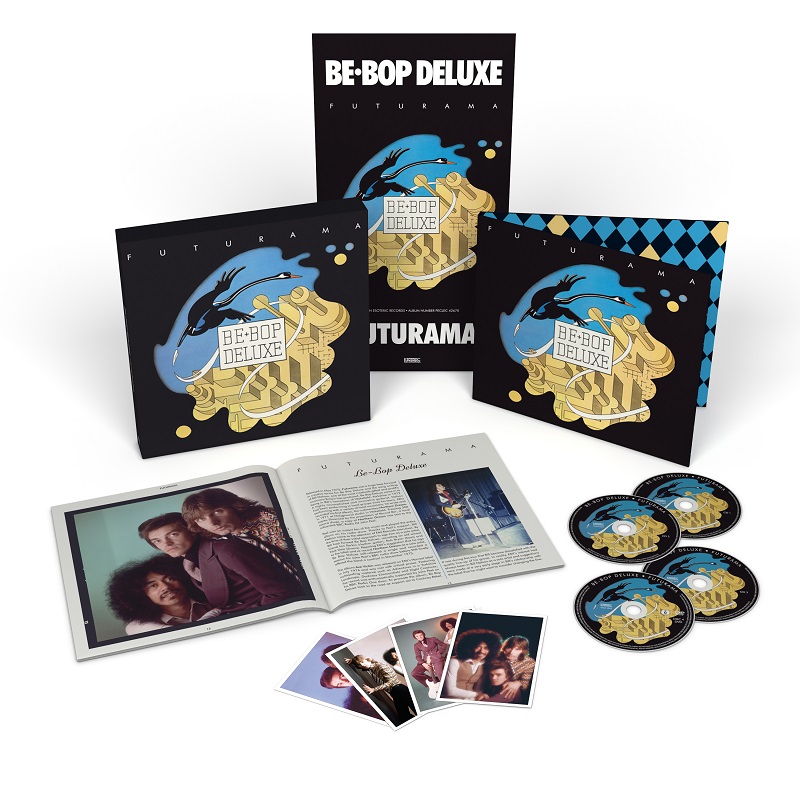 Be Bop Deluxe’s 1975 album gets the newly remastered and expanded treatment across 4 discs with a shedload of ephemera if your wallet – or partner – permits.

Having done a remaster with panache on Sunburst Finish from 1976 (and reviewed so eloquently by Ian Canty here) Cherry Red (or Cheery Red as my computer often prompts) are back on the Be Bop Deluxe trail with Be Bop Deluxe’s legendary 1975 album released on the (legendary, naturally) Harvest label. Legendary maybe because we tend to look back with a rose-tinted glow at a set recorded with the legendary Roy Thomas Baker at the legendary Rockfield Studios by Bill Nelson and his troops.

A quick gander at the monster of a booklet (in pdf form) reveals some amazing images that above all else show some impressive period fashions plus an enlightening  Bill Nelson 2019 essay on the album. It’s interesting to hear him talk about the change of personnel and auditioning bassists who had no flair (interesting choice of words considering the sartorial splendour of the BBD boys) until part Maori Charlie Tumahai provided the eclectic spark that satisfied Nelson’s desire. Indeed, it was Nelson’s admitted lack of formal training that gave the band its uniqueness, plus the wonderful vision of him working out songs in his little front room in Wakefield.

So the Nelson/Tumahai/Simon Fox set up developed an intriguing mix of mid-Seventies progressive musical intent, yet not of the hobbits, capes and extended song suite variety but swinging more towards the rock and glam direction.  Exactly the sort of outfit you’d find on the Whistle Test in the days when it was Old and Grey.

Of the album itself, Maid In Heaven even hit the dizzying heights of #36 in the UK singles charts as part of the Hot Valves EP and was “the best Be Bop Deluxe single,” in Bill Nelson’s opinion. Music In Dreamland’s brass band evoked the colliery bands Nelson would hear in his local park as a child while Jean Cocteau reflects his early love of jazz and remained a source for Nelson for years to come. It’s a comment that becomes apparent in the Adventures In A Yorkshire Landscape BBC In Concert take in particular that finds the band at its jazziest. He talks further of Sister Seagull being “a favourite of fans and a precursor to Crying To The Sky from Sunburst Finish” and it’s one that remains a BBD go-to track. The familiar opening riff as instantly recognisable as Jethro Tull’s similar Aqualung signature.

A second disc offers the standard new stereo remixes while the third disc of live stuff comes with the super duper edition and may well be the deal breaker to get your hands on four John Peel (before he went punk) BBC session tracks and a previously unreleased BBC In Concert  six-track set that features selections from their catalogue to date. Nelson leads the way and impresses with some funky chops and dynamics on Third Floor Heaven and the set climaxes with some impressive guitar work on Axe Victim. A DVD for those who feel that in they may as well be in for a penny as a pound, provides the added bonus get the usual selections of  5.1 versions plus an unreleased promo video of Maid In Heaven and the almost obligatory OGWT performance from July 1975.

Ultimately though, let’s come back to where we started with the two-sided vinyl album; one that was  “a leap of faith and imagination…no restrictions, no rules, no limits.” A phrase which really sums up the Be Bop Deluxe philosophy during their brief time in the spotlight.

Listen to Love With The Madman here:

Be Bop Deluxe may be long gone and terribly missed, but Bill Nelson remains active – Find out more online