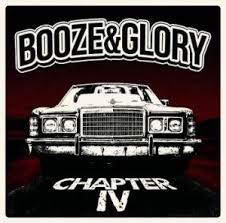 Fourth album by London based Street Punk quartet Booze & Glory, their first for the Burning Heart Label. Ian Canty hears echoes of the past in the punk of the future.

Booze & Glory formed in 2009 and since that time have gone through a few bass players and drummers, with co-singer/guitarists Mark and Liam being the mainstays of the band. Recording three albums and a number of EPs during the last eight years, they’ve steadily rose up the ranks to a prominent position on the street punk scene, carving out a niche as an exciting high-energy live act.

Mixing in the early Oi! sound of the Upstarts etc with the kind of hugely chorused singalongs Rancid came up with early on (and perhaps a pinch of late ’90s catchy Euro Punk that the likes of Bombshell Rocks perfected), they have gone from strength to strength with anthems that detailed the kind of universal problems anyone not born with a silver spoon in their gob could identify with. They also have often critiqued the Punk/Oi scene’s obsession with the past, defended the youth’s right to have their time today.

With this, their fourth album, they’ve looked to broaden their appeal by embellishing their sound with a bit of keyboards and even a banjo at one point, whilst maintaining their dynamic, rock-solid punk rock & roll.

I have to say when I first listened to this LP I was struck by parallels to the Clash’s Give Em Enough Rope. Now I know that record has pretty much been looked down upon since its release in 1978, what with Strummer and Co getting in BOC producer Sandy Pearlman (though it occurs to me now what exactly was wrong with getting someone at the desk you who would make your record sound great? Anyway I digress), the general self-aggrandising and the look at issues a world away from Garageland, but it also has some bona fide classics in Safe European Home and Tommy Gun and bar a couple of dodgy tracks the rest isn’t bad either.

Booze & Glory do sound great on here – clear, powerful and mighty. Harking back a little to the Clash comparison, whilst I certainly wouldn’t go as far to say they seek to emulate Strummer’s lyrics, the guitar playing on here is up to Mick Jones standard and the band’s honesty and emotion in their approach is there for all to see. The track For The Better Times even has a little bit of old timey pub piano, like on Julie’s Been Working For The Drug Squad!

Don’t get me wrong, Booze & Glory do not aim to mimic the Clash or that particular record, but for me listening to Chapter IV it has the same feeling of time running out, the same mixture of hope and desperation, the same determination to struggle on whatever life throws at you. There is a little of Sham’s That’s Life thrown in, but make no mistake this is a thoroughly modern punk record filled with stories of the day to day dramas of ordinary people. Though not polished, there is a sure touch to their song-writing that just rings true – this isn’t Phil Collins going on about Another Day In Paradise while he’s on his yacht or whatever, this lot are living it.

The album begins with Days, Months, Years, which sets out toting a Celtic folky piano intro, which may well lull people into thinking we’re due some Father Ted/James Galway/Dropkick Murphys hokey journey to the Emerald Isle, but we’re swiftly introduced a very catchy and anthemic song about the problems of someone trying to settle in foreign shores. An idea worth considering in the modern day.

Their Oi roots show on No Rules, straight-forward and no nonsense, ably propelled by some infernal bass playing and mob vocals. It also is the first sign of the see-saw between despair and hope that characterises the lyrical message here – a human condition that is reality for most of us, the pin-balling of emotions between knowing we’ve got all the cards stacked against us occasionally balanced out by the odd pleasure or victory.

The theme is expanded upon in The Time Is Now at the outset, though the brightness of the music contrasts with the subject matter, freewheeling Punk Rock with a little of Eddie And The Hot Rods’ ebullience in there somewhere. This is not mere wallowing in misery though because in the end the song turns round, finding strength through hitting rock bottom, not letting it beat you.

The actually anti-violence Violence And Fear is an absolute stormer replete with a great hook-line – live I expect this really ratchets things up a notch. Blood From A Stone has some appealing female vocals working well with the rough pipes of B&G themselves – it is the story of clock-punching that working people almost anywhere would identify with and musically the closest we get to a ballad here (but not that close). It really works very well.

For The Better Times has the great line “for the nights we can’t remember with the friends we’ll never forget” – a bittersweet dual sense of loss and celebration, tied to a great “Wooh, hoo, hoo” refrain and a near Pistols style backing. In a final echo of Give Em Enough Rope set closer Start Believing ends things on a melancholic note, there is the same “learning a hard lesson through experience” feeling to it that All The Young Punks had.

I can see Chapter IV winning the band new fans without incurring the wrath of long-time supporters, being musically spot on and stuffed with catchy numbers, with those wary of the Oi! tag resting easy as there is no macho bluster here, just inclusive honesty. Also I have to say that I’ll be watching their next step with interest because they are making progress in a slow and steady fashion and it could well be in the next few years they will come up with their best stuff. For the time being though, this album is more enough to be going on with and a “state of the nation” address for 2017 to be proud of.

Chapter IV is a series of snapshots of humdrum life, frustration, failure, conflict, joy and finally good times making the struggle worthwhile, all set to some molten lava-hot driving Rock ‘n’ Roll. Booze & Glory emerge, as we all hope to, Bloodied But Unbowed.