At the vanguard of contemporary British festival culture is Boomtown, an elaborately decorated music and arts festival held in the Hampshire countryside over the dates  7th – 10th August.

Since 2009 the event has been evolving into one of the most talked-about festivals in the country thanks to the cutting-edge vision of its directors and designers. 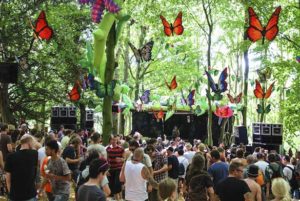 This is a place where you have the opportunity to become a character in one of the most innovative and compelling event-fictions of recent years, and at the receiving end of a mountain of hard work put into making sure you have the time of your life.

Themed as a fictional frontier town, Boomtown is separated into a milieu of separate districts, each complete with its own elaborate back story and each providing a unique experience. From futuristic techno-utopias to tribal-like forest-grottos, these beautiful settings provide a diverse range of escapist fantasies, entertainment and music, with central areas including OldTown (Pirates, Balkan & Gypsy), TrenchTown (Reggae and Dub), Mayfair Avenue (Electro Swing and Glamour), Wild West (Bluegrass and Cowboys), Whistlers Green (Folk and World Music), the PG family harbour of KidzTown, DownTown District (Drum & Bass and Jungle) and ChinaTown (Ska and Punk).

Headliners this year include The Cat Empire, The Wailers, NoFX and Jimmy Cliff, although part of the beauty of the way the Boomtown lineup is set out is how it maintains a relatively consistent level of quality throughout the festival – a booking strategy you really appreciate when you find yourself able to just wander around, while other festivals can sometimes encourage you to rush from one stage to another, trying to catch the handful of gems scattered through a relatively second-rate medley of acts. That said, I will personally be hoping to catch the Easy Star All Stars, Dub Phizix and the Toasters over the weekend. 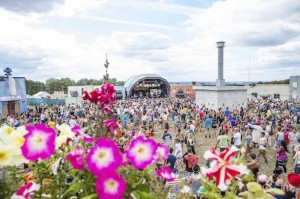 Possibly the most mind-boggling feature of the festival is Arcadia, originally seen in Glastonbury, which comprises an enormous scrap-metal spider, spurting fire and flashing lights around its central pod, where DJ’s control the gargantuan soundscape and the mood of the swarming rave below. To give an idea of the kind of atmosphere this place creates: last year, after the final record was played, the rave continued for hours with nothing but stomps and chants to fuel it, at the same level of energy it had had during the headline acts. Something about that place just sends people nuts!

One of my personal favourite festivals, Boomtown offers the kind of experience many of its competitors attempt to simulate, but with an authenticity, vividness and pure adrenaline-frenzy that is only matched by the really big players.

Part of this is the obvious passion and aptitude of the people behind it, and part of this is the kind of crowd it draws: everyone at Boomtown is great fun, buzzing with energy and up for losing their shit together on a level only seen at the best kinds of party. A varied and full-on treat, this festival comes with the highest of recommendations for those daring enough to brave its thrills.

Boomtown will be held 7th – 10th August. More information on the website.