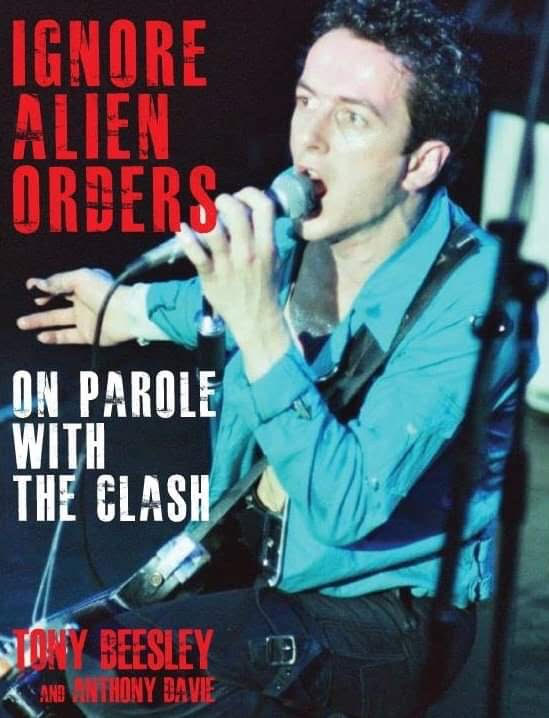 Ignore Alien Orders – On Parole With The Clash

If the maxim ‘you never forget your first love’ can also be extended to include bands, then for the co-authors of this painstakingly researched and satisfyingly exhaustive tome, that band was The Clash. Tony Beesley’s Days Like Tomorrow literary imprimatur usually concerns itself with all-things ‘mod’-related, but it has recently set its sights on punk. And so if Ignore Alien Orders is half as enjoyable as that of Andy Blade of Eater’s recent memoir Outside View – also under Days’ auspices – then we are in for a treat.

Now, most who have availed themselves of the seemingly unending plethora of Clash-related books, DVDs and reissues are probably wondering, and not without good reason, what else is there to discuss? A valid question, and probably one which possibly troubled the co-authors no-end, until they (presumably) had a road-to-Damascus moment of clarity: a book for the fans, by the fans.

And so, the authors issued a public appeal via Facebook for Clash-related memorabilia, both physical (fans’ photos, autographs and other ephemera) and anecdotal. Fast-forward to
this reassuringly weighty tome which is replete with first-hand accounts from those who met the band, interacted with them, debated with them and literally, during the ignoble Clash Mk II years, let the band crash in their homes. For example: one early account has a pre-Clash and 101’ers Joe singing the Beatles’ This Boy whilst at a party.

Many felt at the time that it was ‘uncool’ to retain such keepsakes as autographs and ticket stubs, but you can bet now, four decades on, those that didn’t wish they had done so. Many of these treasured trophies are on display here. It’s remarkable that over four decades later every sight and sound from those remarkable live performances seems to be indelibly inked into people’s souls.

It would be a mistake to assume that Ignore Alien Orders is solely comprised of hagiography and rose-tinted remembrances however, because there are also contributions from such literary luminaries as Kris Needs and Jonh Ingham. There is also nuanced analysis of such subjects as what was it that made the Strummer/Jones songwriting team so special, to an examination of the sartorial aspect(s) of this most stylish of bands. From the superficial to the weighty – it’s all here.

As well as a foreword from Ray Gange, the anti-hero of the 1980 Clash film, Rude Boy, the authors have also managed to gain exclusive licensing rights to some excellent never-seen-before shots of the band, as well as some interesting testimonials from the many support bands that benefited from The Clash’s legendary largesse.

It must at times have felt like an overwhelming task to weave the fans’ memories, anecdotes and observations into The Clash’s chaotic but glorious timeline, but rest assured it was all worthwhile, because Ignore Alien Orders has achieved the near impossible: it will satiate the thirst of the most committed Clash City Rocker, but it’s also a perfect entry point for those who wonder what all the fuss was about.

The book is available to order here