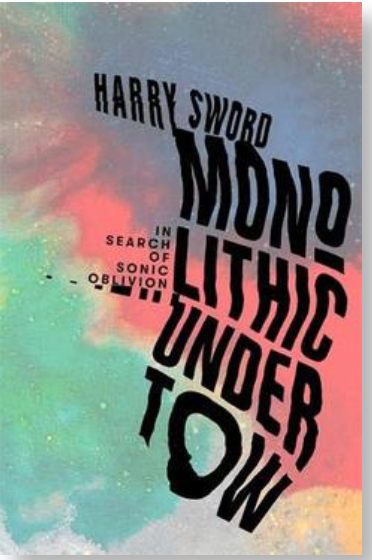 Pre-order the book from here

‘A 10/10 classic and already in the running for one of the music books of the year. Monolithic Undertow is a thrilling account of the ‘drone’ that truly is at the heart and soul of not only music but life itself.

The drone hooks you in and takes you on the trip. It’s the fundamental of music’s ancient and modern because it is a direct connection with the vibration of nature, the universe and god. It is the core of all old musics and an increasingly key part of modern music.

Everywhere you look now there are classical, electronic, folk, post-punk and metal bands toying with the form that arguably goes back to the big bang and the hum of the universe. The very beginning of time that everything gushed out from and resonates to this day in the key B.

The drone is the very soul of music.

From the Doors genius ‘The End’ and its shimmering take on Indian ragas to classical music’s brilliant evocation of the very vibrations of life and death to the hypnotic shivers of feedback or guitar filth that undertow rock music to the pulsating throb of electronics or the acoustic resonance of old folk – it’s part and parcel of our musical culture. Over the last few years its become a genre of its own after Earth played with the form and Sunn O))) took it to a new post-metal frontiers.

Monolithic Undertow undertow takes you on this journey with an eminently readable and fascinating trip. Harry Sword’s writing style is super informed and explains the complex with clarity and the strange with familiarity creating a well-informed and captivating account as he embraces the whole journey deep into the heart of pop culture.

Sword traces the story back from the womb and then to prehistory, from the mediative OM to ancient musics like Aboriginal didgeridoo and the equally vintage carnyx. Onwards through the ancient Greeks evoking the delirium of Dionysus with his reed Aulos pipes invoking the madness and ritual of religion and nature – the very sound opening portals and taking the mind on the trip.

The journey continues through religious inanition from the holy OM to the haunting Gregorian chants of the Byzantine courts and continues, as it has done for centuries, to the centre of the drone as a sonic enabler of meditative transcendence.

These are the very foundations of seeking the face of god music and humanity and run through classical and jazz and into post-war pop culture and its esoteric and mainstream fringes from the Beatles and George Harrison’s fascination with Ravi Shankar or his equivalent in the Stones Brian Jones and his recordings of the Moroccan The Master Musicians of Joujouka . What I love about this book is that it turns you onto many of the game mainstream changers underground geniuses like Lamonte Young with zero snobbery. It thrills to the Stooges and the Doors slower drones to the genius of jazz goddess Alice Coltrane and on and on into post-punk and Swans and Sonic Youth and into fringe modern metal and the dark cellos of….

This is a book about the very human fascination with sound, the drone and the shamanic other. The whole weighty volume works like a drone – pulling you into its own ecstatic journey – perhaps a groundbreaking in itself – perhaps the world’s first book of drone writing!

In 2021 drone is everywhere framing the dystopia and releasing to the euphoria and its journey is a strong reflection of the times. Harry Sword connects with the music that can be reflective and transcending. He looks at why the drone works – the enticing trip that creates a sense of the other, the ecstatic embrace of the one note, the endless cosmic slip and slide of sound that draws you into something deeper and mediative and into something so deep and eternal that you are hypnotised by its beauty. He signposts the key player and explains the fundamental brilliance of the drone.

Eminently readable, full of musical tangents and ideas, this is a must-read for anyone who is with fascinated by music culture or enticed by the trip or just interested in humanity itself and who and what we are and what makes us tick and the sound that all makes.