Home Blogs Book review : ‘Doin’ It for the kids’ : gritty and spellbinding... 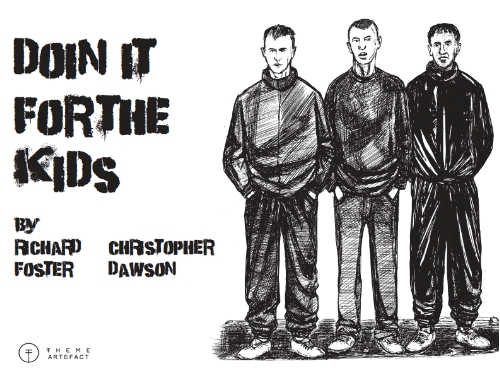 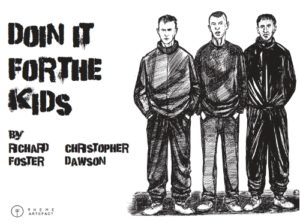 Pre order the book from here

Accrington is a funny old town.

Jon Anderson from Yes came from there and it’s football team has ben the source of fascination for gernations of football fans since it was one of the founding members of league before falling apart and regrouping endless times. A cracked mill town in the semi forgotten Lancashire heartlands it’s the source of it’s own stories and it’s own narrative.

Some of the best British art is the stuff that concerns the details.

The so called kitchen sink dramas – the grubby, grinning, grittiness of the very day. We are really good at that kind of stuff. The great art doesn’t come out of the spoilt hearts of the big cities but the broken and forgotten towns.

This book captures that. Set in Accrington. It’s a darkly funny grind through the back pages of the town by two renegades who escaped from there.

It’s not always comfortable and doesn’t pull any punches but it’s a tale that needs to be told and a valuable document of the real England.

ABOUT THE BOOK: “This is a book that already feels like it’s from another age entirely. Imagine: a world without smartphones, where the weekly local paper getting delivered was a Big Thing. In fact, so big, you’d get the Friday (Accrington) Observer on a Thursday night. Quicker than Twitter. Another age. Even going down Accrington Stanley’s changed. Can you still take a flask to the game? We hope so.

Looking back, one wonders why we ever began Doin’ It For the Kids. It was not a response to any form of trauma or any hidden stresses and tensions that we were suffering at the time. It certainly wasn’t therapeutic drawing it. But the fact that we both left Accrington shortly before beginning the story is probably not entirely unrelated…

We knew we wanted to write about Lancashire but could not find the form to do the subject justice. After several years of wool-gathering the focus finally narrowed to the town of our birth and upbringing, Accrington, and the characters of Alwyn and Nigel began to form.

Accrington is definitely central to the book. Its quirky and irascible nature is lodged deep in both our souls, after all. But we both had a sense of ambivalence towards Accrington and wanted that to come through (and surely, unless one wants to retreat from the world, one must have an ambivalent attitude to wherever one lives).

So it’s not one of those dreadful feel-good, “no-nonsense decent Northern folks” things. At least we hope not. Living in Acc can be boring and small-minded as hell, and we wanted to show that. And in the book we wanted to shame the casual racism that one sadly still encounters (everywhere, not just in Accrington, we hasten to add).

Sometimes the only solution to everything related to living in Acc was to go down the pub. We certainly hope we’ve shown that. Cheers cock.” – Richard Foster & Christopher Dawson
ABOUT THE AUTHORS: Richard Foster is a music journalist and fine artist. Between 2005 and 2015 he was editor in chief of Incendiary magazine. He writes regularly for The Quietus, Louder than War, Vice (Noisey), True Faith, Luifabriek and Sounds XP. As well as his journalist work he works at the “avant-garde recreation institute”, WORM Rotterdam; is co-founder of the Dutch “existentialist nonsense” label Smikkelbaard; and runs the AA club nights in Leiden. He is currently researching the Dutch post-punk and punk movements. He likes pies and Peter Paul Rubens.

Christopher Dawson is a novelist and rock journalist and was born and raised in Accrington. Since leaving university he has attempted various ways to avoid working for a living and hopes to find still more in the future. He lives in Sheffield with Claire, Elsie and Dottie. He also likes pies.