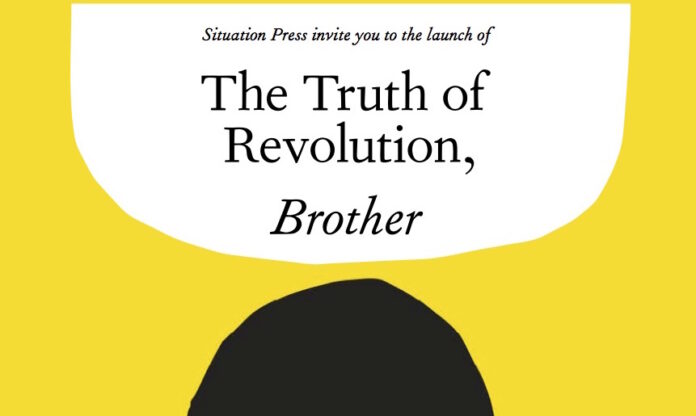 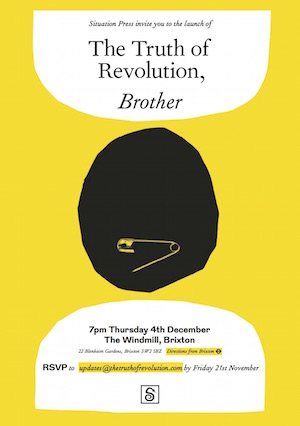 The Truth Of Revolution, Brother by by Lisa, Charlie & Robin

Sophie Sparham reports back from the launch of a book, funded via Kickstarter, which is “a unique exploration of the philosophy of punk, based on the ideas, beliefs and lives of the people that created the movement.”

So it’s a week night in Brixton and it’s bloody freezing, however, inside Brixton Windmill there’s a night that’s worth braving the doom and gloom of a British winter for. Tonight is the book launch of the much anticipated ‘The Truth of Revolution, Brother’ and the pub is packed. Here, faces of punk, old and new have come together to celebrate the 288 page exploration into punk philosophy, produced by Lisa, Charlie and Robin.

Tim Smith kicks thing off with his amazing acoustic ensemble, he is one of many of the brilliant acts that will grace this crowded room with their brilliant performances. Others include, Interrobang, The Mob, Steve Lake and spoken word from Steve Ignorant. But behind the celebrations, is the discussions of an extremely important and passionate movement. So what is ‘The Truth of Revolution, Brother’ all about? I caught up with Robin Ryde to find out about the hard work that went behind the pages.

He tells me that the book involves more things than I originally thought, ‘It involves interviews with more than 30 of the key people that helped to create the movement, as well as including new and original artwork, poetry and prose.  It is one of the few, if not the only, book to examine the lives of punks as they have been lived up until today, almost 40 years later. It is a book that has sought to make sense of one of the most exciting and incendiary music and artistic movements that we can think of.’

The idea of the book was actually sparked by the authors’ trying to understand why they’d found punk so powerful in their teens and to honor and give thanks to the bands that had introduced them to this powerful and life changing philosophy. And they did this more than well, they travelled around the world to gain interviews.

‘We spoke to people from the States including Ian Mackaye, Jello Biafra and Steve Albini, from Iceland such as Einar Orn and across the UK including Penny Rimbaud, Charlie Harper, TV Smith, Mark Stewart and many others. Our top 3 would certainly include Penny Rimbaud who has dedicated his life to a philosophical journey that has extended the ideas of anarchism and disruption, that were associated with Crass, into a fearless interpretation of Existentialism and Zen Buddhism. Dial House, where Penny and Gee Vaucher still live is, a testament to this.’

‘Jon Gnarr, the former Mayor of Reykjavik tells a heart-rending story of being misdiagnosed with “mental retardation” (this was the doctor’s term in Iceland) and sent to a borstal in a remote part of Iceland.  Following a commitment to acquaint himself with almost every major philosophical and political text he could find (the Bible, the Koran, Tao Te Ching etc.), Jon Gnarr became the world’s first Punk Anarchist Mayor. That’s something right? Finally, with Steve Lake of Zounds, we hadn’t laughed so much having conversations about such heavy topics. It was a joy, and what a lovely and sincere man. His words about the punk movement made a lot of sense to us too.’

All I can say in response to those stories is wow and wow to the amazing, inspiring people that fill this room tonight. This is just one of the many nights that goes to show that punk is most definitely not dead and will refuse to die for a very long time.

‘The ideas in the book – of challenging authority, disrupting ideology – of taking  charge of your own situation – couldn’t come at a better time.  We live in the shadow of the Global Financial Crisis and the terrible conduct of the banking industry. We see more and more people disaffected by the political process, and it’s clear that the system isn’t working, at least for a significant majority of the population. In the words of Crass ‘There is no authority but yourself’ and so the answer to any or all of these problems is for all of us to take the decisions, to make the choices and bring about the life changes we want to, right now!  There is nothing to wait for. I think we have a lot to learn from the immediacy and sense of personal responsibility that punk brought us.  We should be talking more about punk.’

So how relevant is punk today? The answer is very relevant.

Their book journey may be over, but this is just the beginning for the authors. Robin tells me that all the interviews have been filmed and to expect feature length documentary next year, how exciting!

Photo gallery below. All photos by Mark Nelson.

All words by Sophie Sparham. More writing by Sophie on Louder Than War can be found at her author’s archive.