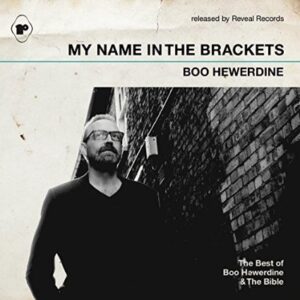 There must be others who share the experience in their early days of record buying in checking out the centre of their vinyl and wondering about the strange names which appeared beneath the song title on the label. Boo Hewerdine is just one such name, even quoted as saying “all I ever wanted was my name in the brackets” but about time he took some of the credit for his songwriting contribution, which is right were this collection fits.

There’s a full complement of his material,  from his mid eighties work with The Bible, some of which came dangerously close to mass acceptance, up to some new songs recorded with this compilation in mind. The four songs included from The Bible years  reflect the period with some smooth pop melodies yet there are moments when you’d place some of the melodies and lyrics right next to The Smiths – for one the jangly guitar of ‘Graceland’ and imagine Morrissey singing about “if you can’t be good, be good at being bad.” The graceful plod of ‘Dreamlife’ also makes it abundantly clear how  even back then how suited Hewerdine was for writing for other artists as you’re already imagining how it might sound in the hands of any number of other bands or singers or thinking the inevitable “that sounds a bit like…”

In fact that’s a bit of a theme of the record. Not only has he been ribbed about performing so many cover versions in his gigs when in fact he’s been the name in the brackets of songs made famous by someone else, but you can also play the ‘who would this song be suitable for?’ game.  ‘Patience Of Angels’ of course, is firmly in the hands of Eddi Reader but have a listen to say ‘Joke’ and wonder which poppy guitar band would take this one on, while something like ‘Geography’ might easily find itself in the hands of some American acoustic folk hero.

Lyrically melancholy at time – ‘Blaze  Of Glory’s  “if I have to die I’m by your side” again evoking a Morrissey tailored outlook although it might be argued, used more subtley and  in a relevant context rather than just miserable – oh woe is me – for its own sake. ‘Last Cigarette’ and the strings of ‘The Birds Are Leaving’ (where the feeling draws you towards McCartney) continue the sombre mood, no wonder he talks of people in tears at his gigs; Hewerdine just has that knack of articulating his thoughts, phrasing his words and matching them to music which  just seem to click or connect with people’s psyches to garner that sort of emotional response.

Added to the career retrospective collection of tracks are three new recordings – ‘Amazing Robot’  has already seen the light of day as a single, harking back to the magical board game which those of a certain age may well fondly remember. There’s also the  new single ‘Snowglobe’ with a vocal from Icelandic songstress Hafdis Huld  who recently supported Boo on tour, while ‘Last Shot On The Roll’  once again takes a lyrical look back to the days of film in cameras and how using up the final few frames to finish off the film would throw up reveal interesting turns. No doubt the words evoking a smile or two from the older generations!  In “They say a photograph can sometimes steal a soul, I saw it in your eyes, the last shot on the roll” there’s a darker message accompanied by a simple yet verging on faintly disturbing rhythm.

All in all quite a satisfying assemblage of quality songwriting, yet on the other hand, there’s just the feeling that it represents just the tip of the iceberg. As a writer who’s contributed to the output of the likes of kd lang, Kris Drever, Heidi Talbot, Paul Young to name but a tiny few and collaborated alongside State Of The Union, Neil MacColl and the marvellous Eddi Reader as well as working as a solo artist since 1992 with his ‘Ignorance’ album, it takes your breath away.

Boo Hewerdine can be found on his personal website: BooHewerdine.net, on Facebook, and he tweets as: @BooHewerdine.