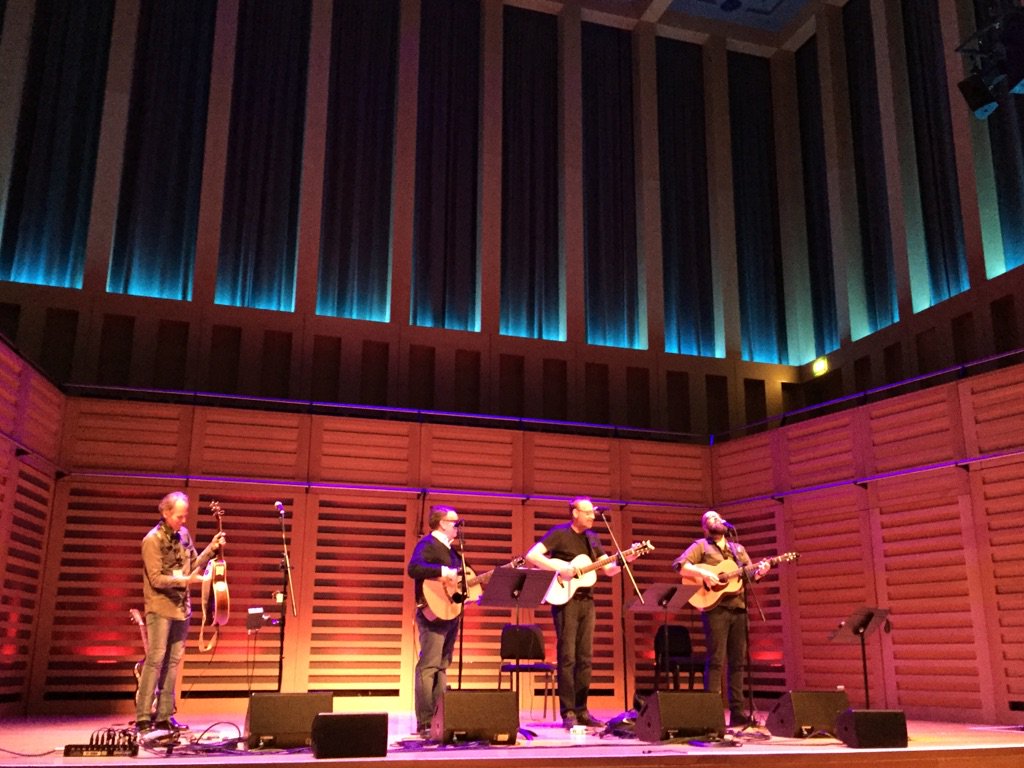 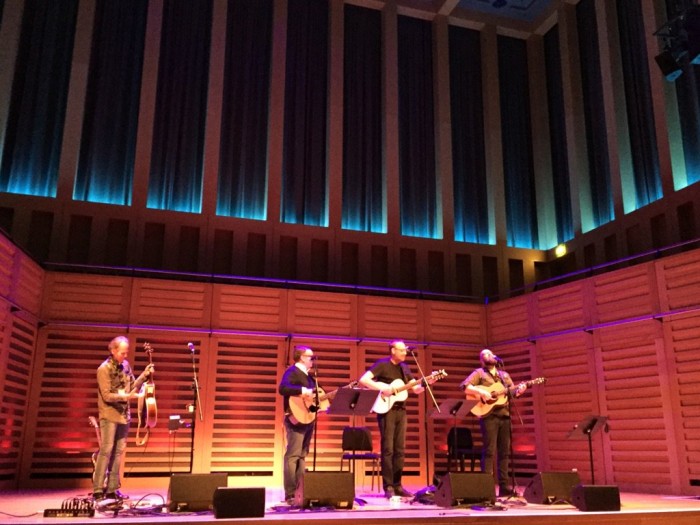 At the request of Kings Place, Boo Hewerdine organized this songwriter’s circle. Louder Than War’s Craig Chaligne reviews a fantastic that saw the four musicians mixing genres and repertoires in the wonderful setting of the Hall 1.

After a small introduction from Boo (in his usual self depreciating style), the first to perform was Scottish singer songwriter Findlay Napier. Having met Boo on one of his famed songwriting workshops, their collaboration continued on Findlay’s first solo album “VIP: Very Interesting Persons” that was produced and partly co-written by Boo. The energetic “Don’t Leave Your Door Open” was followed by “52 Dez”, a social commentary piece based on the sighting of a blue BMW with alloys wheels on a run-down Glasgow estate. “How Will You Escape” was preceded by a story of how Boo managed to untangle the writer’s block Findlay had on coming up with a chorus for that song while another excellent co-write “After The Last Bell Rings” enabled them to duet. Brooks Williams then joined them for Findlay’s last track, a biographical number about a 1920’s conman entitled “The Man Who Sold New York”, the american guitar player embellishing the song with some tasty slide playing. Then it was time for Brooks to take the lead with his solo segment of the show, his JJ Cale homage “Joker’s Wild” was followed by the bluesy “Rosalyn”. “Frank Delandry” recalled the sudden disappearance of a famed New Orleans guitar player and enabled Brooks to recall the time he played a gig in a prison (the story has a great punchline that I won’t reveal here). “My Turn Now” written while he was playing gigs on the Isle Of Man is based on the riders that keep participating in the island’s famous Tourist Trophy bike race year after year in hope of winning it. An excellent version of State of the Union’s “23 Skidoo” sung with Boo was followed by Findlay’s return to sing “Man with a Hammer” that closed the first half of the show.

Boo started the second half of the evening playing at selection of songs from his back catalogue including one he wrote for the exhibition “On Their Own: Britain’s Child Migrants” that is currently taking place at in Bethnal Green’s Museum of Childhood called “The Man That I Am”. His most famous tune “Patience of Angels”, originally written for Eddi Reader was followed by “Honey Be Good” from his days leading The Bible. “Cinderella”, a song co-written with Chris Difford that is to be part of a musical that they have been working on for the past five years was the perfect way to bring the Squeeze lyricist on stage. Visibly pleased to be part of the proceedings Difford played one song solo “Cowboys Are My Weakness” from his 2010 solo album “I Didn’t Get Where I Am”. Boo rejoined for Squeeze’s”Fat As a Fiddle” and the evening finished with the quartet singing several Squeeze’s song : “Take Me I’m Yours”, “Up The Junction” and “Cool For Cats” (during which Chris thanked the audience for their very polite but nice backing vocals). An excellent version of The Bee Gees “I Started a Joke” put an end to a glorious evening.