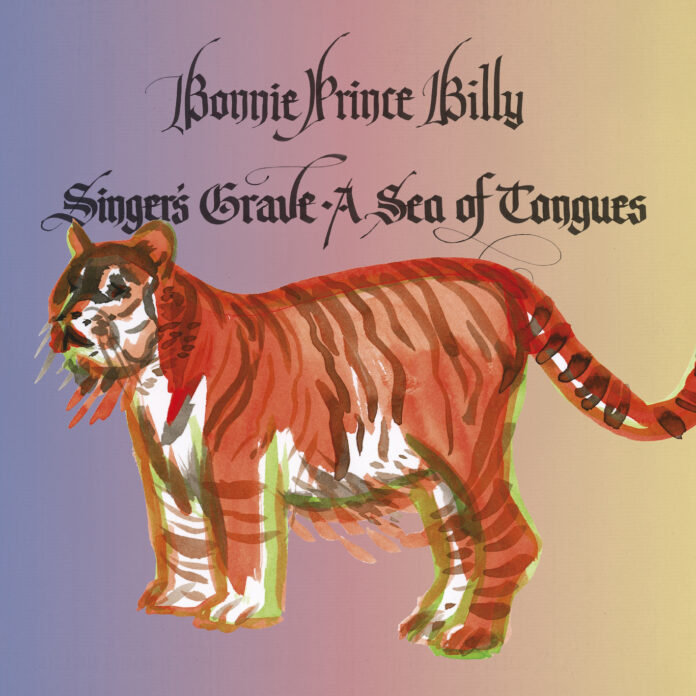 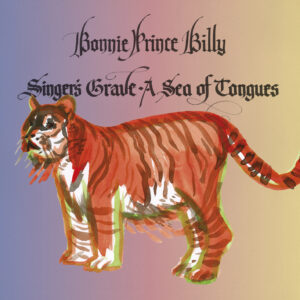 Bonnie Prince Billy revisits his own Wolfroy songs, reshaping them into an up tempo, optimistic new form and having a lot of fun in the process. idp reviews

Oldham is back with a new album made up mostly of reconditioned material, not exactly sticking two fingers up at the conventions of the industry, but at very least cocking a snook, safe in the knowledge that his fanbase are all committed long-term snook cockers so we’re all on side anyway.

The songs on the album are for the most part re-workings of the songs from 2011s Wolfroy Goes To Town, one of the sparest and quietest of all the Bonnie Prince Billy albums, a small masterpiece of understatement and wistful spirituality but also an album that wilfully defied comprehension. It’s not the first time Oldham has revisited his own material, but it’s the first time he has done it as completely and so soon after the release of the originals.

So Singers Grave: A Sea Of Tongues arrives with a bearing frisson of mild transgression, a kind of “we shouldn’t really be doing this, but we really want to so we will” feeling. It’s a bit like listening to an official bootleg and all the more enjoyable for that. This is not an album that can be accused of taking itself too seriously. Oldham sounds like he’s having more fun than he’s had in years and the album is being promoted with some spectacularly over the top spiel ….’

“At the locus of five corners, mythos is in the wind; a sea of tongues boils forth, mountains spurting forth from the magma. Bonnie sings for who he was and will be and for all of us, in time. Bonnie Billy has been quoted as saying that one of the songs on the album is a conceptual track that’s about one day in 1973 when only two people died in the whole word …..”

….. and a recording of one of the most awkward and baffling radio interviews ever heard, almost certainly a stunt, but you kind of wish it wasn’t.

Wolfroy wasn’t an easy listen, cool and dark and uneasy but now with fuller and more sprightly arrangements and with McCrary sisters and Chris Scruggs (grandson of Earl) taking over backing vocal duties from Angel Olsen, the songs, have the room to open up and breathe a little, to flower fully. Of course with some flowers you find that actually you like them better as buds (roses, who needs them?) but that’s life.

Oldham’s vocals are as sibilant and melancholy as ever, rising up through the mix, drawing power from the ensemble and from being pushed in new and unexpected directions. He’s positively optimistic on Quail and Dumplings, an uplifting song of delusional hope and the previously frail We Are Unhappy is an altogether more muscular thing its new incarnation with banjos and backing vocals providing some lovely counterpoint to the tone of the lyric. Night Noises, tail gunner on Wolfroy, is here promoted to album opener and it’s one of the songs that benefits most from reworking, becoming an up tempo meditation on dignity and the creative impulse with banjo and steel guitar to the fore and it’s followed by So Far And Here We Are, in which New Whaling, shorn of its wonderfully haunting choruses is rebuilt with a fine freewheeling and confident vocal and a percussive guitar rhythm that at times almost strays towards rock and roll.

Of the new songs on the album Whipped (which was actually a B side to Wolfroy’s Time To Be Clear) is a smartly observed portrait of a man who relinquishes friendship for the love of a good woman and New Black Rich (Tusks) is the album’s highlight, wonderfully wistful and filled with the disappointment that comes with excessive self knowledge – “I’ll say good bye before we meet It’s not who I am It’s who I’ll never be …”

The album closes with Sailor’s Grave A Sea Of Sheep, a softly spoken hymn to love and resilience – “It’s okay, you can say I’ve had my day, But my God and I don’t see it that way.” So what’s it all about? I’ve got no idea. Despite some changes to the lyrics on Wolfroy, (some of which seem to completely stand the songs on their head almost as if he’d just interpolated a “not” into each sentence), it’s unlikely that anyone will be any the wiser. Whether that matters is up to your personal taste but I suspect that few people listen to Bonnie Prince Billy for the clarity with which he sets out his world vision. We listen because he sounds wise and wonderful and slightly damaged. He sounds like we would like to think we sound when we sing to ourselves and we think no one is listening, and on this album he sounds as wise and wonderful as ever, the only difference is he sounds like he’s enjoying himself more than usual. And his snook has never been so cocked.

Bonnie Prince Billy’s website is at royalstablemusic.com. He doesn’t do social media.