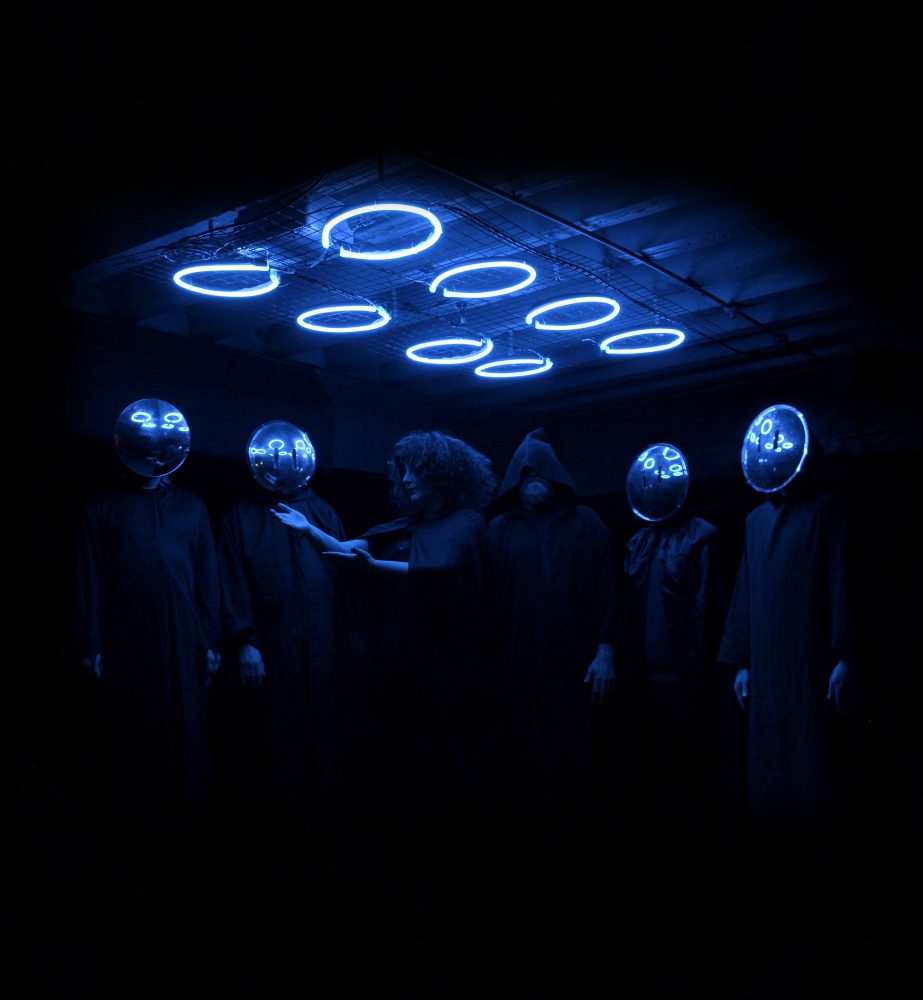 Bonnacons of Doom, a shifting collective based principally in Liverpool, have announced details of their self-titled debut album, out on 18 May 2018 on Rocket Recordings. The band have also confirmed a series of dates, including 11 March at the Garage, part of Rocket Recordings 20th anniversary celebrations and Raw Power festival in London on 25 May – full details below.

Whether congregating in dimly lit halls or in forests, and whether mediated by e-mailed audiofile or infiltrating darker realms of consciousness, mysterious forces are being channelled by a shifting collective intent on psychic communion by any means necessary. Bonnacons of Doom’s identities may be shrouded and hidden in the live arena, yet the force of their vibrations – as captured on the unearthly vibrations and unholy revelations of their self-titled Rocket Recordings debut – is gloriously manifest.

“From the beginning, we’ve been really interested in the transformative possibilities of music” explains Rob, one such Bonnacon. “How it has the power to make us and the audience at that particular moment into something else. Whether that’s being in a trance like state, being blissed out or just annoying people, there’s something that’s physical and mental that we want to change in people. In particular, we’ve tried to work with repetition, volume and texture rather than traditional song structures. Anything that produces a stasis that people can get lost in rather than following something in a linear or obvious way.”

Whilst the line-up of Bonnacons of Doom has been known to morph with each undertaking, the prime movers in the principally Liverpool-based collective endeavor have included members of Mugstar, Jarvis Cocker’s band and Youthmovies, donning robes and masks to sculpt altered states and subsume themselves to the ritual. “Initially it was that we were interested in how British ritualistic costume took things from everyday life and make them otherworldly and slightly grotesque” notes Rob.  “Whatever lineup is playing, once you put on the mask you’re a Bonnacon.”

“The ritualistic is central to what we do” he clarifies. “For us, performance exists as this space which is other to everyday life and allows us to access something primal. I was brought up in a religious sect and in my childhood the house was often full of people singing and speaking in tongues. Reflecting on it now, I think those people were reaching to get out of themselves, to get beyond language. Music is used as a force of control and cohesion in religion- it takes people out of themselves by producing different states of consciousness. The album is full of found sound from different religious traditions buried in the mix. By using that cut-up approach we want to be the opposite of controlling- we want people to project what’s important to them on the experience, to create their own ritualistic meanings.”

Recording mostly in single-takes and in the band’s trademark improvisational method at Suburban Home studios by its owner and Hookworms frontman MJ, this recorded incarnation of Bonnacons’ arcane conjury operates stubbornly free of genre, sashaying alongside psychrock, repetitive drone and electronic experimentation whilst consumed by a devotional intensity that’s multiplied by the transcendental echoing of vocalist Kate. The result is a formidable cosmic continuum that joins the dots in constellations spanning the jam-based magick of Amon Düül II, the wild abandon of ecstatic jazz and the revolutionary spirit of acid house to produce a mighty alchemical charge.

“Acid house is where we’ve come from as people, a kind of collective memory in the band, It’s a sensibility” emphasises Rob. “The abandonment to the moment, the fucked up out of control perfection of giving yourself over to the absolute now. Those are the feelings that were formative in our relationship to music and that’s what we’re always chasing when we’re playing.”

“I guess our environment is another key influence. We’re almost all from Lancashire and Yorkshire, and the landscape and mythology of the north is part of who we are. It’s darkness and beauty, the weirdness of its folk traditions, the independence of mind of its culture and the melancholy of its post-industrial grain. I think ultimately what we’re trying to achieve is a kind of Trans-Pennine hypnotic music.”