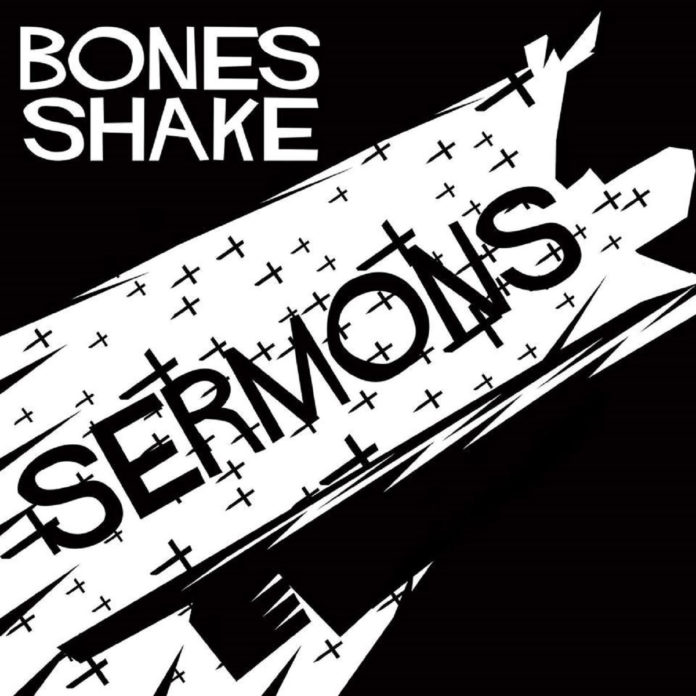 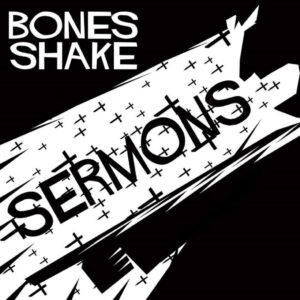 Bones Shake produce superbly feral garage rock laced with suitably down-at-heel blues. Their new album Sermons is no exception. Transfusing the snarling energy of their live show onto vinyl, the album is the perfect antidote to bland indie.

Bones Shakes’ music is dangerous and on the edge, balancing between the devil and the deep blue sea. There is a vicious, ragged quality; a gnawing angst, but it is addictive. The intensity draws you in. Sermons is every bit as dirty and dangerous as it should be.

Beginning with Privilege, a searing polemic on having to make a wedding speech which avoids the grizzly truth, Sermons pulls no punches. David J Brennan throws his huge angry voice at the listener, telling them how little of a privilege it is to be in that position. Stark power chords from Andy Sheffield lead into a track that muses on the loss of a drinking buddy but revels in the provision of a free bar.

The sassy Rock and Roll of Cracked Lips is a Crampsesque masterpiece, full of the same dark power and some damn fine slide guitar. Superb, gutsy and untamed. Sermons hit you full force from the first few tracks and never gives up.

Sleazy slide guitars lead in to King Dick, as David Brennan talks about one bender too many and how howlingly bad that feels. The unreality you feel when you end up in a state like this corresponds with the screaming, crashing feel of the music. The mood is uncontrolled and regretful, but very entertaining.

The fantastic Rock-noir continues with Fryin’ Line, a classic Blues track. That long, hard shift feeling is something many of us can relate to. The guitars are a beautiful embellishment over the slow solid drums. The tremulous, edge-of-madness vocals are atmospheric and raw.

Bucket O’ Blood is a superb short slice of dissolute drums from David Sheffield and more wailing slide guitar ready to rip your heart out. It is full of beauty and melancholy.

The pared-down blues of Girl couple with uncomplimentary lyrics about a dying relationship. The brutal dissection of boredom makes this an unlikely but firm contender for best track. Slow and sleazy, this is brilliant, showcasing just how good the songs on Sermons are.

The siren at the beginning of Cops is already well known to fans of the band’s live audience, heralding the start of their live set. This is another stunner of a song more garage rock than blues. It has more sweary, forceful vocals and gut-punching appeal. As usual, chaos never feels far away and the lyrics suggest an impending riot.

A nice guitar interlude eases us into Kicks before the whole mass of wailing slide and savage drums and tremulous, psychotic vocals. The longest track on the album, it gives room for Bones Shake to really let loose. The symbolism is great, if you think dancing like Fred Astaire and drinking like Oliver Reed are a likely combination, that is. It certainly suggests one hell of a night out.

If amazing blues rock is your thing, Sermons is the bollocks. If you are easily offended, don’t bother: it really isn’t for you. Uncompromising and amazingly vital, this album shows what a great band Bones Shake are. Their live show benefits from the massive stage presence David J Brennan exudes. It was great to see that the music hasn’t suffered. The band are every bit as desirable on record as they are live.