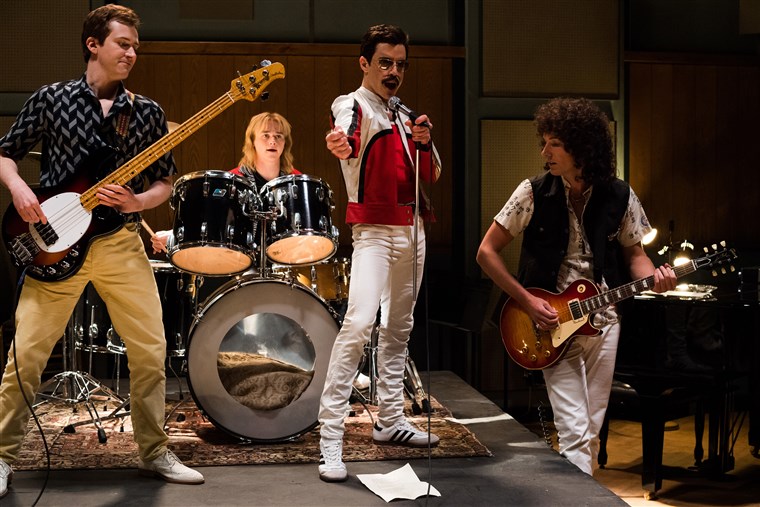 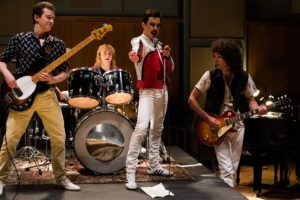 For years I mistakenly thought that Live Aid was 1984, not 1985 as we are informed by the caption that prefaces the scene that begins and ends Bohemian Rhapsody. But then, factual details matter far less than we think in some respects. Bohemian Rhapsody is a biopic, not of an individual but of a band. Fittingly, the film paints its portrait of Queen with broad brush strokes, capturing the spirit of the stadium fillers as perceived by the wider public consciousness.  While more serious fans may baulk at the economics of storytelling at work here, the film is cohesive, consistent and entertaining from the beginning to the middle – where it ends.

In so many ways, Bohemian Rhapsody is the perfect analogue for the band and their music. When we see excerpts of the criticism of the title song blare across the screen after its initial release, we see it described as “contrived”.  All forms of prog rock and experimentalism are necessarily contrived however popular or otherwise the results may be and Bryan Singer’s film is contrived in an appropriately Queen way. During the recording of the guitar solo for the epic track, Mercury asks May to give it more soul to which he obliges and bends a few more notes.  Arguably, that’s the crux of Queen’s music: brilliant musicians creating perfect pop rock with paint by numbers emotions. It is contrived, it is sentimental and it is emotionally manipulative… and it works: we are amused.

In the film we see this contrivance in the genesis of the stomps and claps of We Will Rock You and in the sequence where Deacon’s bass riff transforms into Another One Bites the Dust, ending (albeit temporarily) a rift of creative direction within the band. It’s storytelling shorthand and a kind of elision of narrative that simplifies while somehow amplifying at the same time – the cinematic equivalent of Freddy’s gestures on those big stages.

Those scenes also express the key tension at work within the narrative: the intimate and personal nature of creative endeavour and the desire of the artist to make it an inclusive experience for the audience. For all the technical brilliance of Queen and the range of emotion in their songs, they are transparent – they are crowd pleasers, they don’t urge you to think or really confound your expectations: the audience knows what it’s getting and participates wholeheartedly. Bohemian Rhapsody includes its audience in the exact same way.

The film is in a dialogue with its audience directly and knowingly throughout its running time. We know the arc of the story and we know how it ends.  Such is often the way in recent cinema, from Star Wars prequels to Whitney and First Man: we know where this is going. The emphasis is on the telling rather than the tale.  From the Mike Myers record executive scenes and his comments that prefigure his own perpetuation of Queen and Bohemian Rhapsody in the pantheon of rock via Wayne’s World, it is clear that the story does not and cannot unfold in any kind of organic way and there is no pretence that it should. Rather, we are already steeped in layers of the myth of Queen and here the myth is enhanced yet again.

Rami Malek is utterly compelling throughout as he plays several lead roles.  Malek plays the young Farrokh Bulsara, he then plays the young Farrokh Bulsara transforming into Freddie Mercury… he then transforms himself into playing a fully fledged Freddie Mercury.  But even in this latter, ultimate role he is stepping between spotlights on the stage of celebrity as he channels the Freddie we think we know and the Freddie that will remain forever the source of speculation.  Especially seen against his performance over several years in the brilliantly innovative Mr Robot, Malek is already a virtuoso performer himself.  Equally as strong, if not as prominent, is the performance of Lucy Boynton as Mary Austin, making sense of her own life in the wake of Mercury’s orbit.  Freddie’s attempts to sustain intimacy with Mary after their split are rendered as the painfully egocentric missteps of a childlike naivety, which Mary realises long before he does.

But as simple as the film is, with its broad brush strokes, its emotions writ large, its crowd pleasing, hand clapping, fist pumping air guitar bravado… in terms of its intentions, its characters, its plot, the relationship between fact and fiction, artist and audience, it is a film of pluralities.  There are several Freddies in front of the camera, there were two different actors committed to playing the Freddies and behind the camera there have been two directors in Bryan Singer and Dexter Fletcher.  Or three directors, from Singer to Fletcher and back again to Singer, as some reports suggest.

So: Live Aid 1984 or 1985?  As a child of the 70s, those summer days of the early to mid 80s could be a year long, each one of them.  The spirit of that event, the performances, the music and the sense of occasion beyond itself is unmistakeable and unforgettable.  The emotional resonance of it today, however naive or in some respects misguided, is profound.  When it comes to pop culture history, myth is just as important as fact.  Just more so.  Stomp stomp clap.