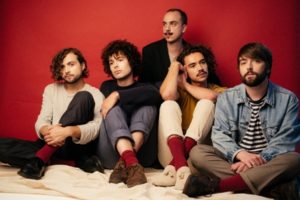 Bristol’s Some Bodies have made a great new surrealist video for their single ‘TV Show’ which LTW can exclusively reveal today.

“TV Show is a pretty obvious song thematically. It’s a lot less cryptic than most tunes we do; with fairly brazen lyrics. It’s observing the weaponisation of trivial gestures in the pursuit of some strange fame. Features of being a normal nice person are now worn like badges of honour and buying a coffee is worthy of screaming from the digital rooftops. At the time we wrote it the world really felt like a big casting call with the allure of shiny stardom causing us all to scratch at the stars. I guess we just turned that into a video. There’s no rhyme or reason as to why the characters in the video are doing what they’re doing because it doesn’t seem like there’s a good reason for us all to be doing it in the “real” world.”