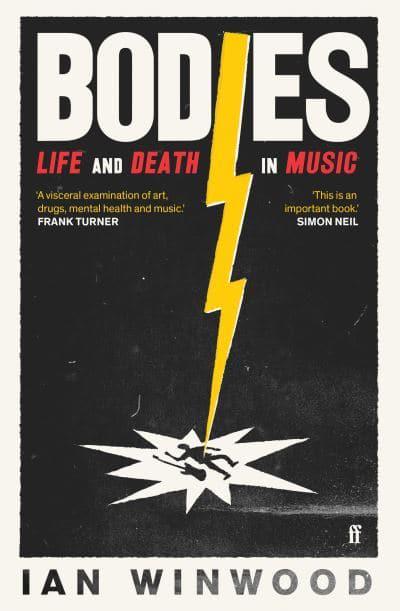 Bodies: Life and Death in Music by Ian Winwood

“There needs to be a separation between music, which is intrinsically powerful and therapeutic … and the uglier overbearing side that controls the whole thing. There’s the unequal distribution of wealth where the artist is the least well-paid person … as an artist you’re seen as a product. And because you’re seen as a product that’s sellable, you’re just not going to be respected enough… “ – Ellie Rose Davies, Goat Girl

A really fascinating thought-provoking book. Ian Winwood wrote for Kerrang! magazine for years (along with Mojo, NME and others, as well as a music correspondent for the Daily Telegraph, though don’t hold that against him. The basic premise of the book is looking at why so many careers in the music industry are affected by addiction, mental health issues and all too often end in death by suicide or overdose. Some might say that it was ever thus, but all these factors have been amplified by events like Lockdown and their impact on the live music scene and cash flow in general.

Although we can now look at the 60s/70s as a golden age of rock music, when creativity triumphed over formulaic showbiz entertainment, the established music business of managers, labels and publishers all made the mistake of assuming that beat groups would just be another passing craze like the Twist or Hula Hoops. This short term vision meant that groups like the Small Faces – just one example of many – were sent out on endless tours, interspersed with very brief recording sessions in order to cash into the max before something else came along.

The book shows though that mentality persists to this day as the industry continues to chew ‘em up and spit ‘em out in its pursuit of the Next Big Thing. In the opening Sleeve Notes the author explains the book’s division into Side One and Side Two. The first section looks at excessive and disturbing behaviour from musicians, while the second part deals with the high levels of addiction/mental turmoil (and the lack of prevention/support that enables it).

In many ways the two parts of the book pivot on the death of his father Edwin, though I don’t want to give too much away. Their relationship is a subtext that underscores the narrative, with the author’s discomfort comparing his Dad’s working life as a miner with the frivolity of his own situation. The circumstances of the death are unsettling enough, but then the author finds that being the last person to see his Dad alive (after a serious drinking session too) leads to all kinds of stress and grief. It also leads to the author himself succumbing to alcoholism and chaotic drug use, and to experience for himself how much colleagues and contacts are willing to turn a blind eye to the freefall in front of them (and to leave him to it after that).

Feeling too burnt out to be sent on yet another thirty date tour? No problem, management will find a stand-in musician (as happened with Elastica’s Donna Matthews for example).

All the way through the book there are extended stories involving the musicians he’d got to know. It’s great too that for every Metallica or Pearl Jam there’s a Creeper or Goat Girl story. James Hetfield’s account of the battles within the group – as shown in the Metallica: Some Kind of Monster Film – make for a recurring theme, with the other group members torn between wanting to help but needing to keep earning. There are also lengthy contributions from Frank Turner, Chris Cornell, Biffy Clyro, Smashing Pumpkins and Frightened Rabbit.

There are quite a few passages in the book which stopped me in my tracks, none more so than the Ambassadors chapter, detailing his relationship with Lostprophets’ singer Ian Watkins, now serving a very long sentence for the vilest crimes imaginable. It’s a brave piece of writing, where it would have been easy to cop out and say “never liked the guy” or “knew he was a wrong ‘un”, but Ian Winwood takes on the uncomfortable process of looking at himself, why he thought of Watkins as a friend for so long, and how much he might have unwittingly aided and abetted him. There’s also a pretty sad exploration of just how much Watkins’ crimes affected the rest of the group – their career was effectively ended overnight by his conviction, leaving them with a mixed residue of suspicion/did they know and anger at his behaviour? And bewilderment at the enormity of what was revealed. Again, as so often in the book, Watkins increasingly heavy drinking and drug use are looked on as coming with the territory, even when he starts making his own crystal meth!

There are several themes which recur throughout – the relentless nature of the biz’s demand for product and promotion through touring, and the artistes need for time to rest and regroup before starting the whole process again. On the other hand, this comes up against the fear of being the one to step off the career merry go round and the labels’ willingness to turn a blind eye to just how the musicians manage to keep going. And of course, it goes much further than that into the outright provision of drugs to keep the client working (I can certainly think of a couple of musical mates whose addictions were aided and abetted by management as long as they were still saleable). There are people like the charity Tonic Music for Mental Health trying to publicise and tackle the issues, for example suggesting that groups should be accompanied on tour by a kind of ‘wellness advisor’, independent of record label or management, who could be turned to for support. It’s a great idea but I’m not sure it would work in practice, given the financial clout of the biz to override any obstacles to more profit. But it’s a start.

And of course, lurking in the background all along is what he calls The Disease, a wild card which changed the game in ways we’re still discovering. Of course death, disease and bereavement were the headline stories – rightly so – but the abrupt end to live-action was a disaster for musicians relying on gigs for income and the opportunity to raise a bit more cash via merch. Lockdown also put a stop to anything but home recording, though extended working in isolation could lead to its own problems, as recounted in the Creeper chapter.

Certain themes and questions formulate as the book goes along. One key issue is deflating the myth that the music business provides a suitable home for all the creative misfits and weirdos who’d struggle to keep up with the 9-5. The author argues that surely it’s the other way round – or as Ellie Rose Davies/LED of Goat Girl puts it, “It’s not necessarily just that [the music business] causes all these mental health issues and then doesn’t deal with them in the right way – although I do think that’s true – it’s also that creative people who don’t necessarily fit into the cogs of our system are drawn to music, and thus to the music industry … that said, the music industry doesn’t deal with mental health at all well”

Ever wonder why – with the odd exception like David Bowie – the majority of artistes’ strongest work comes on their first two or three albums? Read this book and you’ll get a very good idea why. Highly recommended!

Words by Den Browne, you can read more reviews on his author profile here: