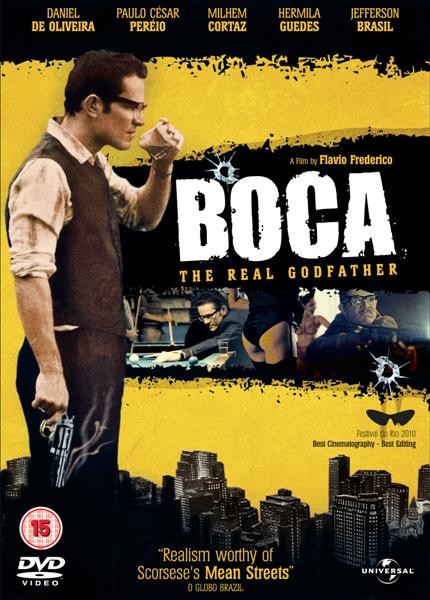 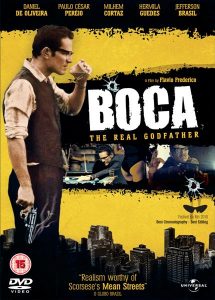 In the traditition of such strong and graphic Brazilian films as City of God and Pixote, Boca is a thrilling gangster film based on the real-life events depicted within the pages of the 1977 autobiography of the feared gangland overlord Hiroito Joanides de Moraes, freely adapted by Mariana Pamplona and director Flavio Frederico.

Starring the outstanding Brazilian actor Daniel de Oliveira, who delivers one of the best performances you will see this year, the energetic and stylish Boca reinvigorates the gangster movie genre.

Hiroito was infamous as The King of Boca do Lixo, an extensive downtown area in SÃƒÂ£o Paulo. During the 1950’s and into the 1960’s, Boca do Lixo was notorious for its nightclubs, strip joints, gangsters, prostitution, bars, drugs and drug dealers ”â€œ a dystopian underworld ruled over with the iron fist of Hiroito Joanides de Moraes. 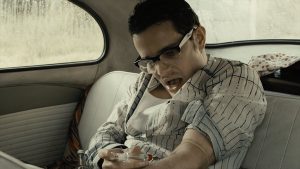 Following the violent murder of his father, in which he was stabbed over forty times with a razor, Hiroito is arrested and accused of the crime, but ultimately not charged by the incompetent and utterly corrupt SÃƒÂ£o Paulo police force of the period. Two months later, aged just twenty-one, Hiroito leaves his doting mother’s middle class family home, buys two guns (firearms are his route to power) and moves to Boca do Lixo. Hiroito quickly becomes one of the most successful, dangerous and wanted criminals in Brazil, due to his utter ruthlessness and feral cunning.

Director Flavio Frederico unflinchingly follows Hiroito’s aggressive odyssey through the violence, the girls, the guns and drugs, as Hiroito establishes himself as one of the most feared and legendary gangsters in Brazil. From an early age, Hiroito recurrently visits brothels, while quickly changing from client to pimp. Yet while he waits for his favourite prostitute he joyfully reads the philosophy of Machiavelli and Baudelaire’s The Flowers Of Evil.

In a memorable slow-motion sequence, Frederico dares to evoke clichÃƒÂ© and the prime cinema of Scorsese in depicting Hiroito’s overwhelming attraction to streetwalker Alaide (the excellent Hermila Guedes). It is a testament to Frederico’s skills as a filmmaker that he manages to convincing pull this off. The couple get married but by the early 1960s Alaide has become weary of Hiroito’s incessant extramarital affairs and debilitating drug addiction.

Hiroito’s viciousness is not ignored, but neither are his few ”Ëœredeeming’ qualities. This is a rounded character, made even more terrifying by his grounding in reality and the fact that Frederico offers no glib psychoanalytical or sociological explanation for Hiroito’s murderous actions. The structure of the movie adheres to the conventional rise and fall of the gangster picture, but Frederico makes his own mark on the genre by focussing upon the details of Hiroito’s surroundings, his clothes and his bizarre kinetic lifestyle – which sees him spending much of his latter career living in a Volkswagen Beetle car, whacked out on amphetamines, speeding through the streets that were once his own gangland territory. 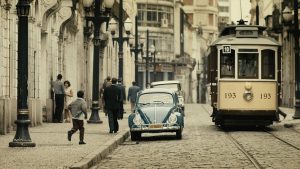 Rather than depicting his protagonist as a cool hipster, Frederico highlights the character’s psychotic disposition and malevolent intent by contrasting his heartless actions with the sharp, highly accurate and strangely beautiful evocation of the period detail/locale that surrounds him. In a particularly effective scene, Hiroito stares at a photograph of himself as a child in the family home. No lame dialogue is needed to underline that Hiroito clearly just does not recognise the image of his childhood anymore.

Obviously, de Oliveira brings all Frederico’s work to fruition with his invocation of the piercing, intense, black-eyed stare behind Hiroito’s glasses. De Oliveira’s Hiroito threatens physical violence at a moments notice as he gradually becomes more unhinged as his uncontrollable predilections get the better of him.

The DVD Extra Content includes a frank and captivating feature length commentary with director Flavio Frederico, a Stills Gallery and the film’s trailer.