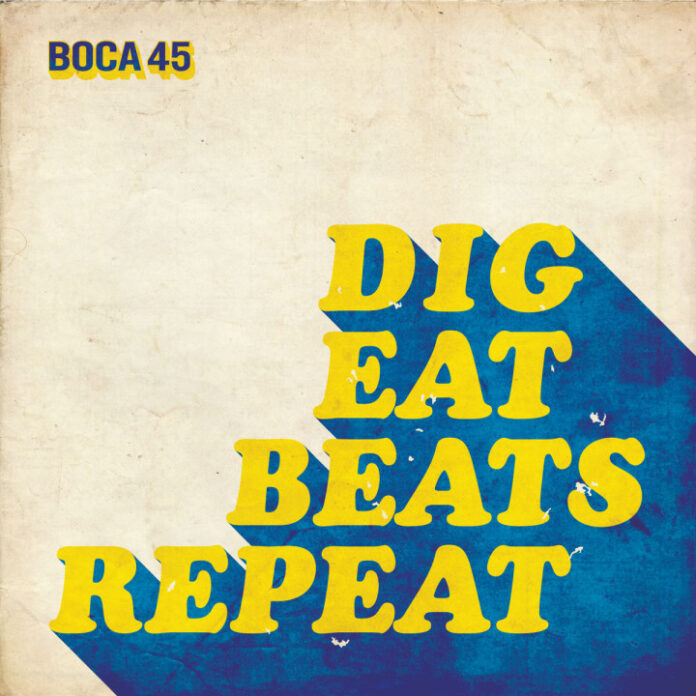 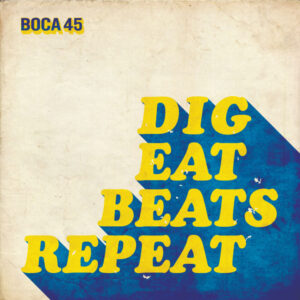 Let’s make this clear from the off…I LOVED this album. Now, you can either continue to read to find out why or you can go listen to it. Either is fine by me if I’m honest. If you are still with me then let me first give you a background on the man called Boca 45.
Boca is a Bristol legend, starting off by selling records in the city’s famous Purple Penguin before becoming a key figure in the Hip-Hop explosion that happened there, building up a following as he spun records in venues all across the city. He’s branched out into various projects which include Malachi and Dolman, each one investigating different genres and each one being highly regarded.

With this album, Boca 45 returns to his love of the glory days of Hip-Hop and with Dig Eat Beats Repeat he not only manages to recreate those moments but brings them to the here and now with an album that is addictive, thoughtful, and just damn right funky.

Everything about this album is on the money, from the original and precise samples, to the flourishes of turntabilism, and the quest for experimentation. Within its walls, DEBR contains everything from Soul to Calypso via Funk and not once do these genres feel thrown in to show off the creator’s record collection.
It’s a record that seeps into your DNA making it impossible to ignore and manages to capture the pure essence of summer.

Featured vocalists include Brooklyn MCs Emskee and The Saint (aka The Good People) whose relaxed but direct flow mesh perfectly with Boca’s beats. The best example of this wonderful union is on third track ‘People Are You Ready’ which is a call-to-arms party starter like no other, a block party anthem.

The album is full of unexpected left turns with Freedom Train being a great case in point as it slows the pace, winding down in a sometimes unsettling fashion with Stephanie MacKay’s sumptuous soul vocal connecting the dots between Stax and trip-hop. As the song gets hold of you it suddenly bursts into Technicolor funk strut. A truly joyous moment.

The rest of the album follows this pattern with beat after glorious beat refusing to let you go for one single second.

This album is a joy to listen to. It’s fun, thought provoking, and so so danceable. It’s a reminder of what hip-hop is capable of when in the right hands. A shining light in a genre that’s becoming more and more regressive and dull. Hip-Hops originators would be proud of this album and so should Boca 45.