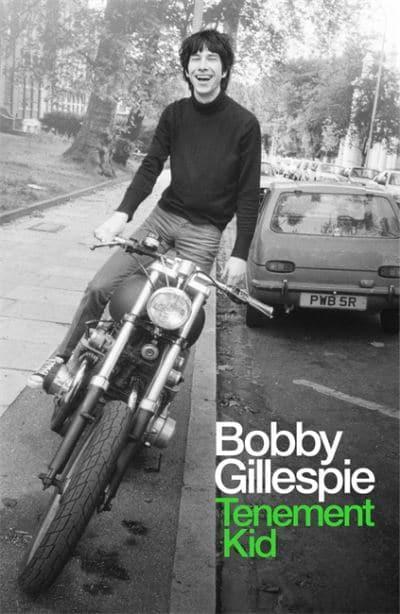 It’s amazing to think it’s now thirty years since the release of Primal Scream’s landmark Screamadelica album in 1991. A similar time shift from that date would have taken you back to the black and white days of Bobby Rydell, Adam Faith, and ‘Crackerjack’.

The early days/childhood recollections part of an autobiography can be a minefield. What seems vital to the writer can feel like a bit of a chore to the reader who wants to cut to the action. Another recent biography I’ve read groaned under the pages of padding about the paucity of TV channels or how you could leave your front door open then and so on. Although there’s plenty of boyhood and teenage street life and football action, he avoids the usual clichés about first love/sexual/drug experience etc. instead there’s more focus here on the general social landscape, as his penetrating analysis of how poor housing, bad pay and conditions plus a cynically underfed education system all combined to condemn generations to a scrapheap of poverty and underachievement. No surprise when the posters on the kitchen wall were Che Guevara and the famous ’68 Olympics Black Power salute. His hardcore Trade Union Dad imbued him with the basic tenets of socialism, a perspective he retains all along, even when he’s “higher than the sun”. In the end, this commitment to the cause leads to family strife and parental estrangement.

The carefully composed profiles of his parents are the first of many telling descriptions of people in the book, whether in-depth or lively sketches of music biz mavericks like George Clinton, Jim Dickinson or Jimmy Miller. This is one of many examples of the cool, reflective analysis that characterizes the book. Bobby Gillespie several times refers to himself as a Romantic – not in the soppy “Hallo trees, hallo sky!” sense – but more in the word’s original Blakean sense – emotion recollected in tranquillity, as the saying went. For him, being a Romantic, even a cynical Romantic, means that on balance one tends to see the human glass as half full.

When I saw the book’s length – over 400 pages – and then read that it only went up to Screamadelica I was a bit surprised, though I couldn’t help remembering the comment from a friend who’d spent some time around Primal Scream that Bobby G was always “very shrewd”. In addition, it’s all self-written, and this personal voice gives the book a unique strength. I was frequently reminded of (my hero) George Orwell’s statement that prose writing should be “clear, like a pane of glass” in the book’s honesty and refusal to cop out from the occasional not so comfortable memory. The narrative often has to change key rapidly, between crazy Jesus and Mary Chain adventures or the grinding slog of the early Scream days, to a considered look at the nature of the singer’s role in a group, or his careful study of songwriting technique, “literary songwriting, songs of experience” as he puts it, inspired by Southern Soul classics like Dark End of the Street. Throughout the book, he also displays an astonishing depth of musical knowledge and passion and an endless curiosity for anything that’s real and intense. He draws a firm line between the Scream’s rock’n’roll heaven quest and the competition, in the form of all the ’80’s plastic pop like Wham, Spandau etc, or the limper House of Love type indie groups.

In fact, it’s his detailed account of his pre Scream musical activity that makes for some of the best reading in the book. There are some great anecdotes and insights from his experiences with the nascent Jesus and Mary Chain, including a mind-scrambling mushroom trip in a derelict factory, where he discovers the essence of sound, the universal pulse beat, pounding the walls with a stick. The accounts of the early JAMC riot strewn, alcohol crazed gigs are great at capturing the impact the group had in giving the UK indie scene a much-needed kick up the backside, mixing punk attitude, full-on psychedelia and sheer anarchic noise. Bobby Gillespie’s minimal drums and Douglas Hart’s bass provided the bedrock for the Reid bros’ to do their crazy thing. But I didn’t know about his time playing bass with Clare Grogan’s Altered Images or his involvement with the Wake on Factory records. Now the Factory story centres on acid house nights at the Hacienda and the mega-success of rock/dance outfits like New Order and the Happy Mondays, but in the Joy Division era, the label was home to quite a few artists like the Wake or the Blue Orchids who’d have been just as at home on the 4AD label. Incidentally, there’s an undercurrent of Great Labels throughout the book- Tamla, Stax, Kent, Factory, Creation.

A recurring theme is the importance of relationships, and of strong friend & family roots. Key players like Alan McGee (Creation Records main man) and core Screamers like Rob Young and Andrew Innes go way back as friends and mates. It’s a nice touch too throughout the book how he makes a point of naming and thanking all kinds of people who helped or supported the group on the way up.

The evolution of Screamadelica itself makes a great story, as we see how gradually the diverse components like Gospel, acid house, ambient sounds, sampling, classic Stones type rock ‘come together’, just like the song said. For all the lazy categorization of the record as Dance Rock it’s interesting to read that he considers it a classic Singer/Songwriter set, but one that encompasses all kinds of styles, like the Beatles’ White Album, for example (I’d always assumed that he’d have a hardcore year zero attitude to pre-punk sounds, but he shows a massive love and respect for artists like Dylan, Neil Young, or the Beach Boys) as well as the usual candidates like Funkadelic and Lee Hazelwood. He also explains the massive part played by Andy Weatherall and his use of samplers, and how this transformed the group’s sound and vision, freeing them from the limitations of the guitar/bass/drums blueprint and making anything possible in theory.

It’s a really nicely produced book too, with a couple of generous photo sections, various b/w pictures scattered through the text, and also some great gig flyers and posters. Incidentally, it’s another facet of Bobby Gillespie that I didn’t know about – his highly developed visual sense and key role in the design of Primal Scream artwork for 12inch & album covers.

I can’t recommend this book highly enough. I found it a much more interesting read than I was expecting. Screamadelica is an astonishing album, which sounds as powerful as ever now. Since then they’ve done plenty of great albums – and the occasional mis-step – without quite reaching the same heights. Reading Tenement Kid you can see just how that record was the outcome of an extraordinary synchronicity of people, places, drugs, technology and imagination which would be impossible to recreate again, a series of golden moments. There’s a load more I could say here, particularly on his sharp analysis of how movements like punk and acid house emerge, coalesce, expand and finally stagnate. The chapters on the Thatcher era collisions of the Miners’ Strike and the later attempts at crushing the Rave scene are as good as anything I’ve read about that era – probably the best music-related book I’ve read this year, and essential reading for anyone who loves and cares about alternative music.