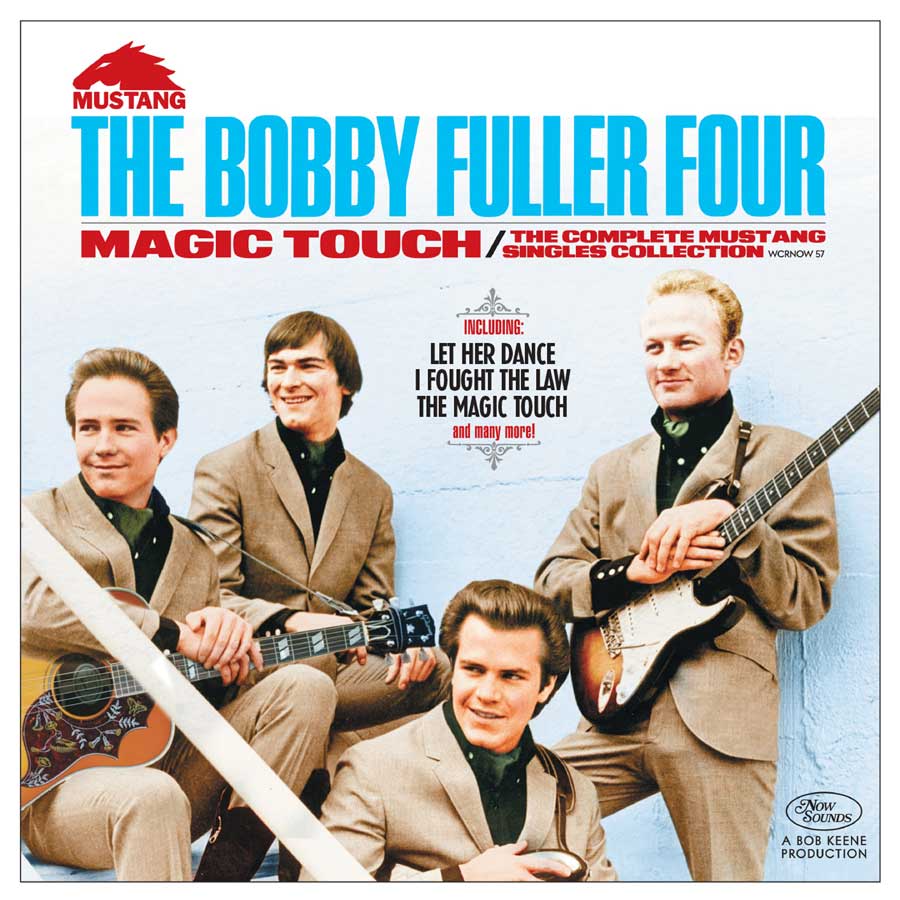 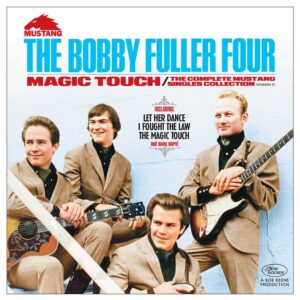 New compilation featuring every single side cut for Mustang Records by the Bobby Fuller Four, including their big hit I Fought The Law, the Sonny Curtis song later recorded by the Clash….Ian Canty looks at a real Rockin’ and Rollin’ enigma that sadly ended in mysterious circumstances……

A lot of people will be familiar with the song I Fought The Law, maybe through the cover by the Clash on their Cost Of Living EP in 1979. The Bobby Fuller Four had a big US hit with their version in 1966 and at the time all looked rosy for the band. An original outfit who stuck to their Rock & Roll roots in the face of the British Invasion and Psychedelia, these Texans moulded for themselves a true American sound, shorn of any Beatles/UK influence. The choice of song, a Crickets number originally penned by Sonny Curtis, gave a nod to Buddy Holly and his band who were a big influence on Bobby Fuller himself. Among Fuller’s other interests were the guitar mayhem of Link Wray (which laid some of the groundwork of the Surf boom, another influences on the BF4), sound experiments including using “found” objects that weren’t musical instruments and harmony vocalising. He produced his own records, crafting these different sounds in a whole which made his band a unique and firmly homegrown proposition.

Fuller had started his recording career way back in 1961 with the solo You’re In Love single where he was backed by the Embers. It was released locally in the El Paso that Bobby and his family had made their home. By 1962 a four piece band, in the mode of Fuller’s heroes Buddy Holly and the Crickets, came together. His brother Randy was a constant presence in a changing line up that operated under just the Bobby Fuller name or as him and the Fanatics. Building up a local following, the band approached Bob Keane of De-Fi Records in California. He would become the band’s mentor, but this time Keane rejected the outfit and they returned home to El Paso dejected. Nevertheless they continued to rack up some local hits and a second attempt to attract Keane’s interest in 1964 would prove successful.

The first tracks here are actually the first fruits of that liaison, their 1964 single as Bobby Fuller And The Fanatics entitled Those Memories Of You/Our Favourite Martian. This was issued by Keane on the Donna label, part of the De-Fi group. The B side had a touch of the Joe Meeks about it, an echo-laden track with a debt to the Ventures in its surf sound with the lead track being a pleasingly lean and tough piece of Rock. Seeing the Fanatics as a band on the rise, Keane created the Mustang imprint for them, but decided another change of name was called for.

The band were now christened the Shindigs, the sobriquet arrived at because of the then hugely popular US music TV show (The august journal was still a long way into the future of course). Their debut on the label was Wolfman/Thunder Reef. The A side was a novelty number, almost instrumental apart from the Wolfman Jack impression – just the kind of thing Lux and Ivy loved. The flipside is a neat Surf instrumental with a good dance rhythm. It wasn’t a hit though and neither was their first waxing as the Bobby Fuller Four, the Take My Word single, which for me was outshone by the Folk Rock of the flip She’s My Girl.

Let Her Dance, their next 7″ inch, did garner them a small hit on the national chart and the production tricks of using bottles as percussion and echo-laden guitars set the record apart and showed what an inventive mind Bobby had. As a follow up the Fuller Four went right back to their Rock ‘N’ Roll roots with Never To Be Forgotten (B side You Kiss Me is a delightfully innocent throwback to 50’s Pop), but the next one was the biggie. After a couple of originals as A sides, the band delved into the Crickets’ songbook and cut their version of I Fought The Law in November 1965, almost two years after releasing the Sonny Curtis number on a locally released disc. This time it stormed into the US Top 10 and the free-wheeling thump of the band made the song their own. Little Annie Lou, the flip, is a cool R&B dancer too.

It would have been hard for anyone to follow up such a record and the Bobby Fuller Four went with a song co-wrote by Buddy Holly this time, Love’s Made A Fool Of Me. This one was much in the I Fought The Law Mode and gave the band another visit to the upper reaches of the American charts, again it had a quality flipside in soulful self-penned number Don’t Ever Let Me Know. For the last record the band released before tragedy struck, it was two Bobby Fuller originals The Magic Touch/My True Love that graced the racks. This wasn’t a hit, but did demonstrate that the BF4 weren’t completed stuck in the 50s, turning in some great wild guitar. Though mostly a solid dance tune there are a few trippy moments which suggested that the band could have easily adjusted to the changing times of the late 60s, had not fate played its hand.

Bobby Fuller was found dead in a car outside of his apartment in Hollywood on July 18 1966. The mysterious nature of his death has led to all sorts of theories, but it seems possible that he died of natural causes. He suffered from asthma and it is not entirely inconsistent with the facts that may have he died after a severe attack. Whatever the true explanation, what is without doubt is that in his passing America lost one of their true Rock & Rollers. He was someone who had his own ideas how his records should sound, a little like Joe Meek in the UK and Brian Wilson in the US. Though on a smaller scale, Fuller was branching out to record other artists like Jay Horton, who has two tracks appended to this release, with the speedy Pop of I Trip On You Being the pick. To give a sense of completism we also have three tracks by the Randy Fuller Four which are perfectly good (It’s Love Come What May was originally voiced by Bobby), but without their leader the band foundered.

Magic Touch/The Complete Mustang Singles Collection shows the Bobby Fuller Four at the height of their powers, their natural grit and energy harnessed to good production. Though there has been some (rather fanciful) talk that had Bobby lived and toured the UK they would have caused a sea change in music (a kind of reverse of the British Invasion), their qualities of tough, imaginative Rock & Roll are clearly demonstrated here. Taking their cues from their Texan predecessors, the Bobby Fuller Four cranked out their infectious and wild songs that could not be denied, even in the face of the dawn of Psychedelia. A really nicely put together collection of an underappreciated band, much more than mere one-hit wonders.