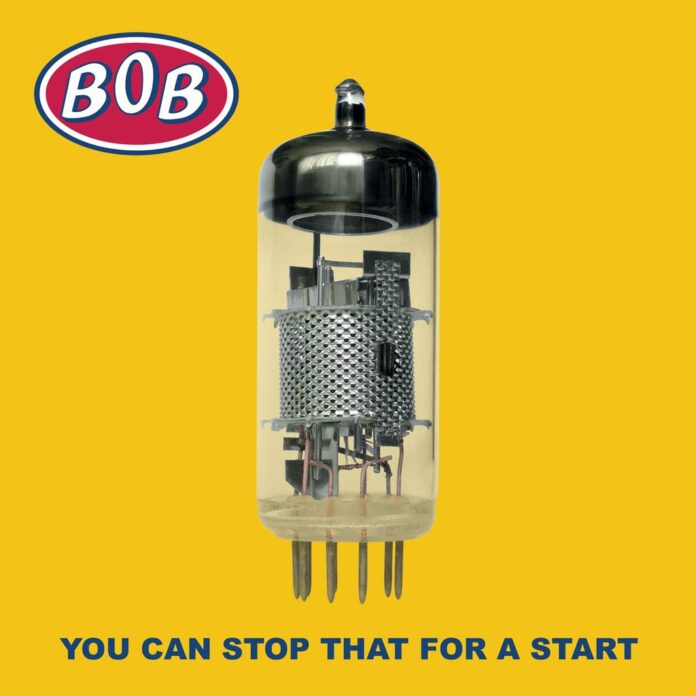 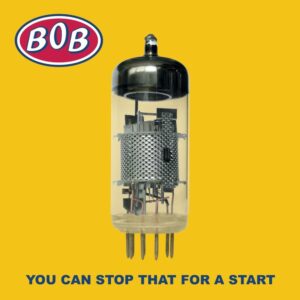 You Can Stop That For A Start

A previously unreleased album recorded in 1992 by the indie pop band BOB, with the CD version having a separate disc of specially selected demos made between 1988 and 1994 (which also comes as a download with the vinyl version)….LTW’s Ian Canty says I’ll have a P please BOB…

North London indie pop band BOB originally formed as a duo of Richard Blackborow and Simon Armstrong in the mid 1980s. They added bass player Jem Morris in 1986 and initially performed with electronic drum programming, rather than a human sticksman. Broadly having something in common with the C86 scene, which was big news at the time, they put out their first recording in that year on a flexi which featured the three songs Prune (Your Tree), Groove and Brian Wilson’s Bed. This was released on the band’s own House Of Teeth imprint. The next year the drum machine was replaced by Gary Connors and they put out the EP What A Performance on the Sombrero label. Quickly becoming favourites of BBC DJ John Peel, they cut the first of their three sessions for his show also in 1987.

BOB were gathering pace and when Dean Leggett (ex-Jamie Wednesday and now part of the excellent One Eyed Wayne) replaced Connors on drums. The new line up issued a further EP Kirsty, which again was heard regularly on the airwaves on the John Peel Show. They also cut a session for Simon Mayo at the Beeb and the two EPs and flexi were bundled together to comprise the Swag Sack compilation album.

The band returned to their own House Of Teeth label (distributed through Rough Trade/The Cartel) for the remainder of their recordings, which ensued with the Convenience single and Esmerelda Brooklyn EP in 1989. Around the turn of the decade Morris left the band, with Stephen Hersom taking over bass duties. BOB finally cut their debut album proper, Leave The Straight Life Behind, in 1991. A year later, the ominous signs around the Rough Trade distribution network began to impact on many bands, BOB included. As the Cartel fell away, the independent scene was dealt a near-mortal blow, with records left sitting in warehouses to considerable frustration and anger.

It’s at this uncertain point we find BOB on You Can Stop That For A Start. They pushed ahead with recording their second album to a background of considerable uncertainty, but still managed to finish a work that displayed none of the behind the scenes problems. In the end, the record wasn’t released at the time, which is a real shame as it shows a mature and cultured outfit that had the musical muscle to match their wry and well-observed songs.

The LP commences with Telepathy, which sets things in motion in a forthright manner. Being sparky and jangly and with a lovely organ sound, this is a classy, crunchy piece of pop rock which creates a good first impression. Say You’re Alone follows with a more acoustic sound, this is fresh and driving folk pop with some eerie drone effects included. Sparse percussion and a walking bass line begin That’s What Tomorrow Brings, something that keys into the psychedelia that has been hinted at subtly in the first two tracks. A great stuttering guitar enlivens things and the tune comes with an appropriately spaced out lyric too.

This prepares us for the guitar rush of Round, which is riffy and wild with some great soloing, a solid rocker with a strong hook. Next song, Now, also has plenty of fire, but there is also a more sunny feel on this sharp character study though and nice harmony singing too. The latter is something that BOB use well over the course of this set. The steady mid-pace of the lengthy Sundown has a dash of the psychedelics about it too and Plastic follows and sets a real feelgood mood with some prime guitar work and irrepressible drums. Very catchy too and the song is another one of BOB’s keenly observed looks at life and relationships that touches just the right nerve.

She’s Something Like Me is again quite uptempo with a classic 1960s pop structure, including some energetic drumming and Green Pepper Feast’s punky riffing also pleases. The lighter, acoustic-driven pop of Queen Of Sheba takes things down a notch, but this is another fine and very catchy pop number. The sound of this one is a bit like the Beatles in 1965 and the song about that unobtainable, if slightly ludicrous, someone.

Using drone, guitar and again some nice restrained drum work, Plastered In Paris stretches out languidly in its over five minutes running time, again this is a touch slower but with a golden sound. Another long tune, Don’t Kid, touches on jazz and blues in the guitar and carefully takes its own time getting to a near-hard rock climax. It harks back to the early 1970s, but a bouncy piece of bass playing drives it along nicely. As a finale I Must Need Some Sleep starts with edgy guitar, before some fine singing takes over. A slow and sure rhythm draws us along stealthily to the end of You Can Stop That For A Start, an album of depth and inspiration.

After the recording was completed, BOB were frustrated in their efforts to get their second album released and distributed. They were under pressure to keep up a near constant tour in order to scrape together money to make ends meet, but after sticking it out for a few more years they finally threw in the towel in 1995. The band reformed recently for a round of well-received farewell gigs, with Armstrong, Blackborow and Leggett joined by Arthur Tapp filling in on bass.

The second disc of the CD set features 15 demos made by the band between the years 1988 and 1994. Long May We Increase begins with the basic thrust of garage punk, before developing into a full-sounding, infectious nugget and STP is a nice example of good-natured jangle. There’s funk chords and warm Hammond organ in Buy Me A Barstool and There She Was has the heart-breaking lyric which sadly concludes “I could never give enough”.

Jehovah throws glam drumbeats, bluesy guitar figures and a near-boogie tempo together to good effect and Hanging On chugs effectively with some minimal but tasteful percussion. Garage punk/psych again rears up in Thunderfeet, which has the classic line “She’s a lighthouse, I’m a shitehouse”! Mixed metaphors abound on Turn That Racket Down and, finally, Before A Fall has soaring, elegant guitar work and a shimmering chorus. If this is the stuff that BOB felt the need to throw away, it’s a good indication of the strengths of the band.

At the time I was completely unaware of BOB and I feel I really missed out listening to You Can Stop That For A Start. If the album that makes up the first disc of this collection had been released at the time of recording, it may well have given the band a second wind. It certainly is a quality record that would have stacked up well against what was out there in 1992.

But the good thing is that what BOB do here sounds like it could have been recorded yesterday, really not feeling that much dated at all. Then again, well-observed, catchy guitar rock/pop will always have a place. Which means we can still enjoy BOB today, as on this record they clearly had a lot to give and had come on in leaps and bounds from their early recordings. You Can Stop That For A Start is where indie pop, psychedelia and even hard rock meet, resulting in a mixture that is always good listening and quite thrilling too.