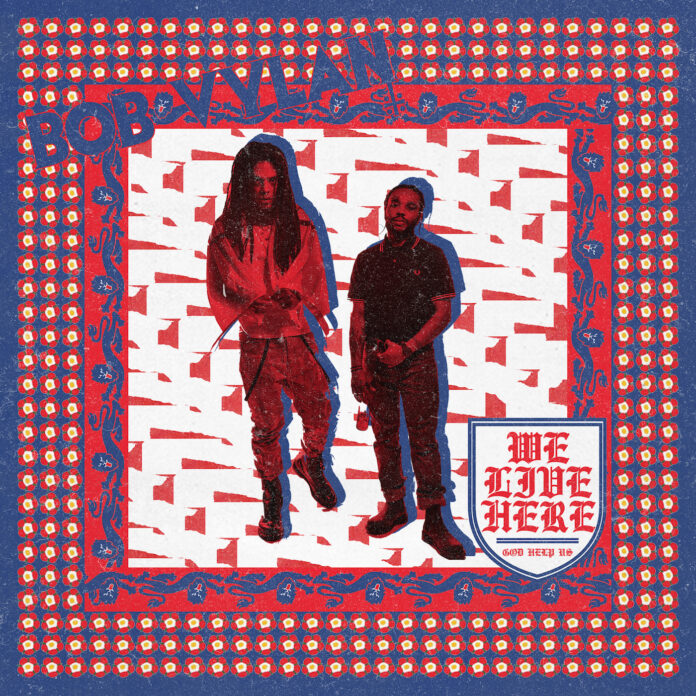 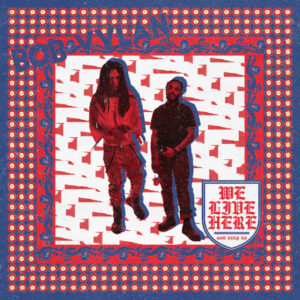 Bob Vylan are Bobby (vocals and production) and Bobbie (drums and spiritual guidance) who began to generate interest in 2019 with a guest appearances on Frank Carter and The Rattlesnakes Radio1session for Annie Mac, supporting Gallows at their show at House of Vans and collaborating with Massive Attack alumni Tricky on his new album, followed by a  North American tour with hardcore rapper Nascar Aloe. But things really kicked off for the band in March this year when they dropped a new single and video: ‘We Live Here’ which we reviewed here. The video went viral, earning rave reviews and, for many, it was their first encounter with a band that hit them like a tsunami.

Despite this the band struggled to get support for their latest EP “We Live Here”, which they believe was due to ‘its social commentary and the topics it tackles’. So, suddenly on 5th June, they decided to release it as an instant download and vinyl pre-order (which sold out in a matter of hours) only on Bandcamp, deciding not to put it on streaming services. They stated: ‘We will not have our art – our art that in particular concerns itself with the fight against injustice, the fight against racism, the struggles of the disenfranchised, the struggles of minorities – we will not have that art devalued to the extent that it’s worth £0.004 a stream on a good day.’

What Bob Vylan deliver on this EP is nothing short of essential listening. The sad truth is that it would have been essential listening 5 years, 10 years, 20 years, a 100 years ago, and it says a lot for the music industry, which still likes to think of itself as alternative and inclusive, that nobody would touch this release with a barge pole. It’s not comfortable listening for white ears, but neither should it be. What it delivers is a view of Britain through black eyes, a soundtrack for what we see happening on the streets, filtered through the news, unfiltered through viral videos, or through black experiences and it demands that we listen to it.

This EP is 20 minutes of education from a righteously angry teacher, but change can only come from understanding.

Musically it’s a mix up of grime, rap and punk with an ominous backdrop of sounds that sound like they come from any rundown, underfunded, forgotten inner city estate. It opens with Intro, a manifesto of sorts which lays out what will follow, a refrain of We Live Here, which is poetry reminiscent of Allen Ginsberg’s Howl, and should have as much impact.

There is England’s Ending with its deep world beat over laying an almost Oliver Twist urchin recitation from England’s slums.

Pulled Pork is an attack on police brutality and harassment and a celebration, a standing proud of being black, of not being ashamed of who you are despite what the rest of society may make you feel.

Lynch Your Leaders attacks the leaders who peddle the lie that a nation’s ills are due to some undefined alien culture, skirting racism with clever words, but making sure the message subconsciously filters through: our culture is at peril from those that are other. Those people who Bob Vylan say, ‘want our country back, but back from whom? They bought this pain upon themselves.’

Northern Line drips with anxiety and fear and sounds like a train going out of control. It includes the line I Can’t Breathe, which resonates in a dreadful way now.

Save Yourself drips with heavy beats declaring that we could all use help, but don’t expect it to come from someone else, you got to raise yourself up, because ‘death happens when you’re making other plans’.

The title track, We Live Here, is the best song you will hear all year. It’s so fucking good I can’t find the words for it. It’s too visceral for words, words will reduce it to a constructivist discourse. Just fucking listen to it.

The EP ends on a Moment Of Silence which is exactly that. It works incredibly well because after the incendiary bomb of the previous tracks, it gives you a time to reflect, to pause, to ask yourself, what can I do?

We Live Here is a view of Britain from the black viewpoint and it’s a message all people must hear.

On Blackout Tuesday (the day social media was awash in black images as a show of support for Black Lives Matter) Bob Vylan posted on Instagram:

‘DEAR WHITE PEOPLE! Educate yourselves. Your black square post does not change the way you think, it does not change the way you view our struggles as black people, it does not change the structures that YOU benefit from on a daily basis, so here, I’ll help you get started! (and here we see a pile of books which includes:  There Ain’t No Black In The Union Jack – Paul Gilroy, The Mis-Education Of The Negro – Carter G. Woodson, The Souls Of Black Folk – Du Bois, The Autobiography of Malcom X, Strength To Love – Martin Luther King, Revolutionary Suicide – Huey P. Newton) Please do not assume that you can read 1, or all of these books and suddenly be “cured” of your racism. These are starting points for what should be made a part of your everyday reading so that you are better equipped when it comes to your role in assisting us dismantle white supremacy and the racist structures built to oppress us.’

To that list of books, I would also add, as essential listening, Bob Vylan.