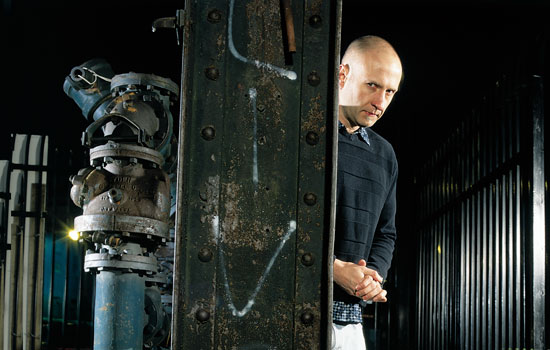 In 1998, singer and guitarist Bob Mould – known for his ferocious fretwork in both Husker Du and Sugar – decided to walk away from the instrument that had defined his career. Sam Lambeth takes a look back as Mould signed off with The Last Dog and Pony Show, before diving headfirst into electronica, DJing and wrestling (no, really)…

It’s late 1997 on a chilling evening in Manhattan and Bob Mould is following what has become his usual routine. After grabbing a seemingly bottomless vat of coffee and a limp energy bar, he ventures to his new studio to work from 11am to 5pm. Rituals and routines had become Mould’s watchwords, but in truth it was a lifestyle that was beginning to wear him down. But there was another long-standing trait that was bothering him more so. “I was tired of being the alternative rock guy,” Mould said. “I (had) been doing the same thing for twenty years – playing rock guitar.”

To those that were avid followers of Mould’s music, the signs were already there. His previous self-titled solo album had not only largely omitted his trademark volatility, but also included a scathing riposte titled I Hate Alternative Rock. Frustrated with the limitations of his signature sound and feeling unable to explore his own sexual identity, Mould announced his new record, The Last Dog and Pony Show, would be his finale to the world of six-string shredding.

However, Mould’s last recording sessions didn’t exactly feel like a celebration. In fact, he was already bored of guitars after just four days of putting tracks down to tape. Anyone worth their salt can recognise Mould’s style of guitar playing, and even though he abhors being pigeonholed into the alternative rock tag, it’s a fitting sobriquet for his style – his anvil-heavy walls of sound are chaotic but cathartic, blistering but beautiful, interchanging from the sounds of beaten-up fists to ambient introspection. For Dog and Pony, though, Mould was only happy when he was experimenting.

Weeks of eclectic experimentation – from toying around with various machines to cutting up and sampling sounds – perked Mould up, as well as guest appearances from Verbow cellist Alison Chesley. However, tragedy struck – the master tapes were recorded over, leaving the sparks of spontaneity and improvisation lost. Mould was deflated once again and could only sit listlessly in another room while an engineer tried to salvage what was left. “There was no way to rerecord them,” Mould sighed. “I became numb from what happened and was then totally uninterested in the record.”

The Last Dog and Pony Show was released in August 1998 to positive reviews and an air of sadness as Mould began his grand guitar-based departure. There are subtle hints throughout the record of Mould’s ever-growing musical curiosities – the lame white-boy rap of Megamanic has always seemed like a toddler taking baby steps, but it’s ham-fisted and slightly clumsy couplets showcase a newfound sense of bravery. Elsewhere, Mould’s twisting guitar sweeps wrap around processed sampling and subtle mechanics in the blistering Reflecting Pool, the churning First Drag of the Day and the lilting farewell Along the Way.

Like all Mould albums, though, the most rewarding moments are the more reflective ones. Opener New #1 may seem deceptively throwaway in its seemingly kneejerk title, but it’s lament for a friendship that ended in tatters (“you’ve got to be here, no matter what happens”) is built around Mould’s strident 12-string and a gently shuffling drum beat. Who Was Around? is atmospheric and suitably sparse before cascading into a beefed-up chorus, while the chugging melodies of Moving Trucks addresses another doomed relationship.

With the album came one last farewell tour. Though Mould allowed himself to get lost in the celebrations, he was keener on his new future. The next few years would see Mould get himself into shape and start a new chapter writing for wrestling federation WCW. He then began exploring electronic music further, releasing the underrated Modulate in 2002 and DJing across Washington DC. In 2005, he moulded (pun intended) these pursuits with his guitar heroics for a successful comeback tour and album, Body of Song.

Twenty years on, Mould has come full circle. His last three albums – 2012’s Silver Age, Beauty & Ruin (2014) and Patch the Sky, released in 2016 – have seen him stay faithful to the pop-tinged ferocity of his Sugar era, but there’s now a refreshing sense that he has found solace in his role as one of rock’s most revered performers. If routine didn’t suit him then, it’s now helping him continue to make grand emotional statements.