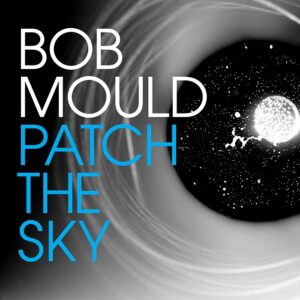 Bob Mould’s Patch the Sky is bright, bouncy and ready for radios – despite the dark lyrical matter. Reviewing this juxtaposition is Sam Lambeth.

Like Paul Weller before him, Bob Mould has found a middle-aged Indian summer that shows no sign of letting up. Any fears that Patch the Sky, his third record in five years (all released through flagship indie label Merge), would suffer from this Fall-esque prolificacy are swiftly dashed as soon as the haunting reverbs that greet ‘Voices In My Head’ dissolve into a kaleidoscopic strum.

Mould has talked up the record as providing a neat counterbalance between maudlin, contemplative lyrics and bright, sunny melodies, but in truth that’s a juxtaposition he’s been mining ever since his Husker Du days. However, he does seem to have the blend particularly potent this time round – the quick double-punch of ‘Hold On’ and ‘You Say You’ are arms-aloft anthems, one a chugging, heartfelt highway hymn and the latter a breakneck slice of alternative rock. The LP is more akin to his other band, Sugar, and their 1994 record File Under: Easy Listening, particularly the up-tempo rocker ‘Pray for Rain’.

As ever, the rhythm section of Jason Narducy (bass) and Jon Wurster (drums) embellish every song, providing a punishing pillory to Mould’s catharsis, not least on the low-key, blistering ‘Lucifer and God’ (Mould has wrestled with both many times). ‘Daddy’s Favourite’ is almost glam-thrash in its strutting intro, and there’s a nice breather from the blazes when the Echo & the Bunnymen-esque psychedelic thrum ‘Losing Sleep’ gently lilts into view.

Whereas Beauty & Ruin was raw in its delivery, Patch the Sky is bright, bouncy and ready for radios, and although ‘Hands Are Tied’ pilfers its intro slightly from ‘Kid With Crooked Face’, it still packs a mighty wallop, as does the latter-day Foos-rock of ‘Losing Time’.

Mould may have had a rough time, but if he can keep exorcizing his demons through such effervescent anthems, maybe he’ll see a little light soon.

Watch the video for the single ‘Voices In My Head’ here:

You can find Bob Mould online at  https://bobmould.com/, on Facebook and he tweets as @bobmouldmusic

Sam Lambeth is a Birmingham-based journalist, writer and musician. You can find more his work on his blog. He doesn’t use Twitter.