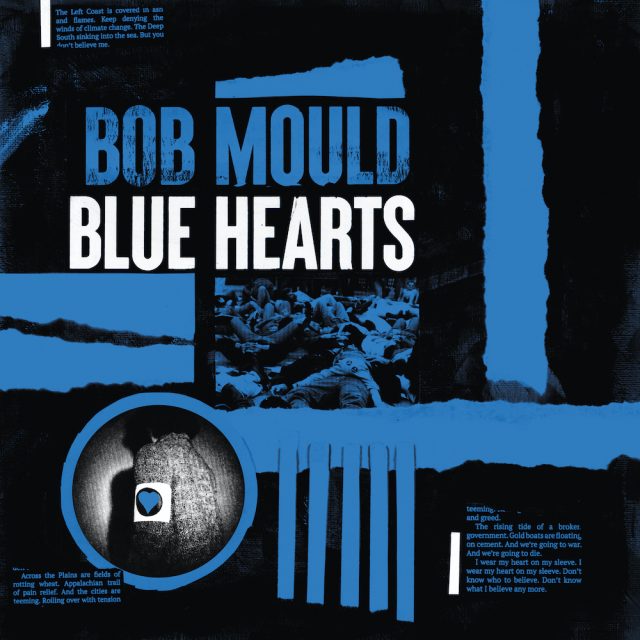 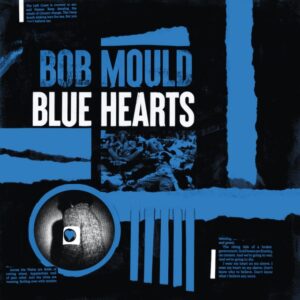 Bob Mould has done this before. To quote today’s vernacular, this isn’t his first rodeo. Just when you think he’s boycotting his usual brand of brimstone-hot anger for something more sanguine, he swiftly returns with a renewed sense of rage.

Less than a year later, the six-song Beaster arrived. It remains a scathing suite of dense distortion and disturbing imagery.

Perhaps, then, we should not be surprised that last year’s Sunshine Rock – a title so optimistic for Mould that it feels like a SNL skit – has been swiftly followed with Blue Hearts, the angriest album Mould has produced for thirty years.

Similarly to Beaster, however, Blue Hearts opens deceptively. Just as Beaster begins with the ethereal Come Around, Blue Hearts starts with the sombre Heart On My Sleeve.

Just Mould and a moody, chugging acoustic guitar, the 59-year-old laments the lack of action on climate change and sighs “I don’t know what I believe anymore”.

He also touches upon Beaster’s obliquely religious themes with the plaintive Forecast Of Rain. One of Blue Hearts’ more meditative moments, Mould sharply critiques Catholicism over crisp distortion and – natch – a quick blast of church organ.

Both songs show restraint, but what’s amazing about them is you can still hear the disappointment and sheer contempt all bubbling dangerously beneath the surface.

If the songs soon change tack, the mood remains. Blue Hearts is the sound of an elder statesman refusing to stay silent, reflecting on the governmental misdeeds of the past and vehemently disagreeing with the moves of the present.

Most of the songs clock in well under the three minute mark and are, as usual, buoyed by the punishing rhythm section of Jason Wurster (drums) and bassist Jason Narducy.

Together, they provide a scorching backdrop to Mould’s searing ripostes, whipping up so much heat you could be forgiven for thinking Blue Hearts is actually a long-lost Husker Du album.

If Mould regrets not speaking up about Reagan, he makes up for it by expressing his thoughts on Trump.

“I never thought I’d see this bullshit again,” he roars on the breakneck state of the union address American Crisis. “Free speech got stolen by a pack of thieves.”

Elsewhere, the stomping Baby Needs A Cookie and burning Password To My Soul fuse Mould’s own troubles with presidential disappointment, with fierce results.

Mould touches upon personal conflicts just as masterfully as he does the political ones.

Everyth!ing to You is an irresistible thrash of fizzy grunge pop that could have nestled nicely on Copper Blue; Leather Dreams is sexually charged and sultry; Little Pieces is vulnerable and volatile in equal measure.

The Ocean closes the record with a haunting coda of distortion. It’s a fitting finale to the desperation, disappointment and anger that Mould feels throughout.

If Sunshine Rock showed signs of Bob Mould softening, Blue Hearts is a firm reminder of the fury that remains.

“Where did I put my sense of misplaced rage?” Mould asked last time out. Looks like he’s found it.