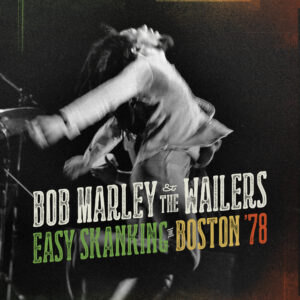 This release marks the first of a stream of Bob Marley releases to mark his 70th Birthday.. Louder Than War’s Paul Scott-Bates reviews.

Bob Marley really needs no introduction. You children will know him, as will your parents and even your grandparents. The Statesman, freedom fighter, musician and inspiration to weed smoking teenage Chavs is an iconic figure the world over. The official Marley Facebook account has the second highest following on any posthumous star and is also in the top 20 of all pages.

What makes him so special isn’t really hard to pin down. He brought reggae to the masses from an enclosed genre to widespread recognition and opened the floodgates for artists before and after him to be heard the World over.

As the album title suggests, recorded in Boston in 1978 the concert comes from the private vaults of the Marley family and features some instantly recognisable tracks and some less so. With a show from the Boston’s Music Hall on June 8 come thirteen tracks of quite brilliant quality. The release of the Exodus album the previous year spurned unprecedented success and hits like Waiting In Vain and One Love (both of which were not performed at the concert) and the legend was re-born.

Despite these two Marley favourites being missed, Easy Skanking more than makes up for it with a non-stop trio of classics to start the proceedings. Slave Driver, Burinin’ + Lootin’ and The Belly Full burst into life with the band and leader on top notch form. Reggae how it should sound – relaxed but tight and sharp – doesn’t really get a lot better.

I Shot The Sheriff is a mammoth version. An explosive beginning with keyboard and huge drums make a classic song even better. Bob is on top form throughout the concert, his voice never falters, the band are absolutely spot-on and the backing vocals are well-timed and unmissable.

Yes, No Woman No Cry and Jammin’ are both here, and both are possibly some of the finest versions you will ever hear of the songs. On the former, Marley is sincere and his words are heart-felt bringing goosebumps down your back.

With penultimate track, Get Up Stand Up the power and conviction of the fight for injustice is never strong. For many this is where Bob Marley excelled, shrouding strong contact in effective songs which had people (un)knowingly singing the message for all to hear.

As the album ends with a seven minute verso of Exodus the Boston crown can be heard clapping, stamping and shouting. It must have been a fantastic night that no-one would ever forget. A true legend giving a legendary performance.