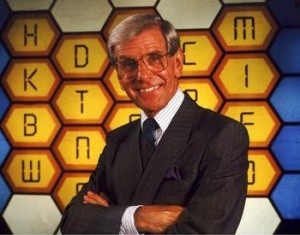 He may not have played sax on Baker Street but Bob Holness was a cult hero to a generation of stoned student freaks, dole heads and just got out of bed musicians who watched his show.

The ITV quiz show, which Bob Holness presented for just over 11 years, was regulation tea-time viewing in any family household in the 1980s and early 1990s.

Aswell as featuring some memorable answers, it was home to one of quiz shows’ favourite catchphrases: “Can I have a P, please Bob?”

The show, which ended in 1993, featured student contestants answering a series of trivia questions based on the letters of the alphabet.

“Although Bob will be best remembered for being the host of the cult television programme Blockbusters, it should be mentioned Bob was also an accomplished theatre actor and his radio broadcasting career spanned over six decade,” his family said. “Bob leaves behind a loving wife, three children and seven grandchildren.”

As debonair Bob hosted ‘Blockbusters’ ever so drole…

Farewell Bob, I’ll have an RIP…