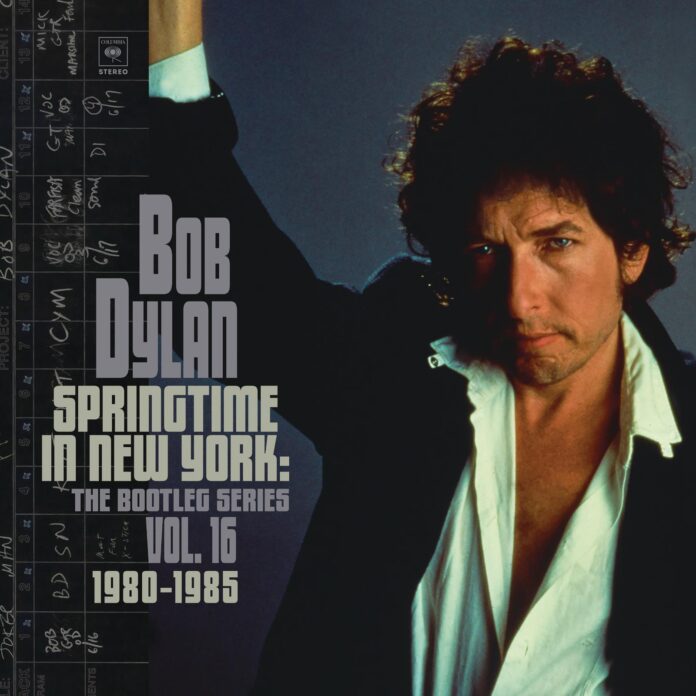 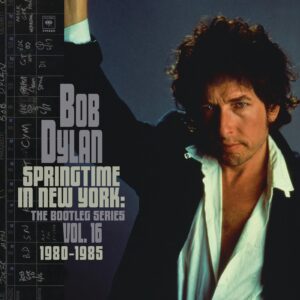 Springtime In New York is yet another collection of jewels to emerge from the treasure trove of Bob Dylan’s extensive archives, through the ongoing gift that is the Bootleg Series. This time it’s focused on the period from 1980 to 1985, covering rehearsals, live recordings, out-takes, alternative takes and mixes from Shot Of Love, Infidels and Empire Burlesque. Ian Corbridge dives in for Louder Than War and finds renewed enthusiasm from this reappraisal of this somewhat under-rated period of Dylan’s career.

Who would have thought that for an artist who has been performing for over 60 years, and has released 39 studio albums, numerous live albums, soundtracks, videos and DVDs, there would be such an unrelenting demand for more and more music from whatever source anyone can muster up? Of course, this is most definitely the case for Bob Dylan and, indeed, observers and fans may suggest this demand continues to increase. And this is where the Bootleg Series is the gift that continues to keep on giving, and I have to admit that I am most definitely one of the willing and grateful passengers on this particular journey.

The roots of the ‘bootleg’ recording can be traced back to the late 70s, when an album entitled The Great White Wonder appeared. This contained some truly enlightening free and easy recordings of Bob Dylan and The Band, taken from their 1967 sessions at The Big Pink in New York, from a barren period for Dylan fans. This was due to the artist laying low for a long while, after a period of almost world domination, which was suddenly interrupted by a motorcycle accident. This was to prove to be the start of a counter-industry in illicit recordings, which would grow exponentially over the following years and decades. The growing demand in this market also prompted an official album release of some of this material from 1967, in the form of The Basement Tapes.

In the case of Dylan, the world of the bootleg recording was brought into the mainstream  in 1991, with the release of The Bootleg Series Volumes 1-3 (Rare & Unreleased) 1961-1991, a triple CD of unreleased material, alternate takes, rehearsals and other forms of previously unreleased material. This album has been long revered for the inclusion of an acoustic take of Blind Willie McTell, a song originally worked on for Infidels, but which never made the final cut. This one song remains, to this day, a huge favourite amongst Dylan fans worldwide and is considered by many to be Dylan’s finest moment in terms of songwriting and performance. And herein lies the secret of that demand for more.

The big question remained as to whether this was a one-off release, and this was only answered seven years later with the official release of the Royal Albert Hall concert from 1966. The Rolling Thunder Review album from 1975 followed in 2002 and then the momentum really started to gather pace, with numerous releases covering everything from Dylan’s earliest unreleased demos, through concert performances, endless out-takes and rehearsal tapes (notably from the recording of Like A Rolling Stone in the mid-60s) and even a return to raw versions of The Basement Tapes themselves from 1967.

Over the past two decades, this series of albums has prompted huge debate amongst Dylan’s passionate worldwide fan base, in terms of the merits of what has been included in the latest collection, what has been missed off, a comparison of these new versions of songs to what has previously been made available, comparisons to the unofficial bootleg releases and what might or should come next. The enthusiasm never seems to dim. And for the record, I am still awaiting a package covering the 1976 leg of The Rolling Thunder Review tour! So, given all this, what does Bootleg Series Volume 16 give us?

The new collection covers a period from 1980 to 1985, focusing specifically on out-takes from Shot Of Love, Infidels and Empire Burlesque. Many fans and critics may argue this was a challenging period in Dylan’s world of artistry, as he emerged from a controversial period of religion-based songs to find a new direction to take him through the next decade. For me personally, this period was a big deal, having found Dylan in 1976, then seeing him perform live for the first of many times at Earls Court in London in 1981 and again at a huge event at Wembley Stadium in 1984. Whilst Shot Of Love was certainly not Dylan’s finest hour by any stretch of the imagination, Infidels was a big return to form to my ears, so I, for one, was looking forward to this new treasure trove of the obscure and unreleased.

This is another mammoth release, stretching to five CDs amongst its many formats and including 57 tracks, 54 previously unreleased. Not a bad start, I thought. But why Springtime In New York? Well aside from the fact that, as far as I am aware, the sessions for both Infidels and Empire Burlesque were recorded in New York largely in the spring, I have no real clue about that one. I did promise myself that I would not comment on what hasn’t been included from this period, so I will try and stick to that and leave all those debates to the online Dylan forums.

Discs one and two focus largely on Shot Of Love material, an album which was always considered the final part of his trilogy of religion-based albums. This came within a relentless period of touring, in which Dylan’s performances were notable for their power and passion, but which also courted significant controversy, as he stepped well away from his established song base.

Disc one starts off with an almost haunting rehearsal take of Señor, a song which was released on Street Legal in 1978. This version demonstrates how Dylan can reinterpret great songs almost on a whim and I can only hope that this very under-rated album from the late 70s also gets a Bootleg Series volume at some point in the future.

What became clear as I worked through this bunch of mainly rehearsal takes was that Shot Of Love was not so much a full-on gospel record, but one which was looking to herald a new direction for Dylan in the 80s. Of course, there are the gospel leanings in the shape of Jesus Met A Woman At The Well, but there are completely different vibes coming through the bluesy Mystery Train and Let’s Keep It Between Us, the country of Mary Of The Wild Moor, the pop of This Night Won’t Last Forever, and the soul of Let’s Keep It Between Us and Abraham, Martin and John. And we even get cover takes of Fever and Sweet Caroline like you have never heard them before!

Disc two largely covers out-takes of mainly unreleased songs from the sessions. Whilst the gospel feel is never far away with the swelling organ and rousing backing vocals, this still showcases Dylan in so many different guises, from the epic and wonderful ballad Angelina, through the hand-jiving rock ’n’ roll of Price Of Love, to a stark and spiritual Lenny Bruce. We also get into the country world of Hank Williams through Cold, Cold Heart and the somewhat incongruous Fur Slippers, which was covered by B.B King at one point. Oh, and check out I Wish It Would Rain for a vocal note I don’t think I’ve heard Dylan reach before or since.

Discs three and four are the centre point of this collection, focusing on out-takes and alternate 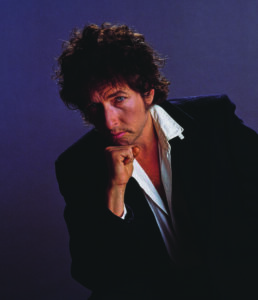 takes from Infidels. This album featured Mark Knopfler as producer, having played with Dylan as lead guitarist on Slow Train Coming, which preceded Shot Of Love. Augmented by a band which also included Mick Taylor on guitar, Sly Dunbar on drums and Robbie Shakespeare on bass, I know exactly why this has always been a favoured album of mine. It’s just lucky that they managed to finally rescue much of these sessions, which had remained unheard for many years due to the technology used in the process becoming obsolete not long after the sessions took place.

I can honestly say that I have never tired of these songs, which perhaps are some of Dylan’s most accessible compositions even for the casual listener, including Don’t Fall Apart On Me Tonight and Someone’s Got A Hold Of My Heart. We also get classics like Jokerman and I And I, heartbreakers like This Was My Love and Angels Flying Too Close To The Ground, a bluesy version of Jimmy Reed’s Baby What Do You Want Me To Do and another unique take, this time of Green, Green Grass Of Home. Two versions of Too Late, together with Foot Of Pride, also document the evolution of another great song. And this release could not be complete without a further take of Blind Willie McTell, this time a full band version.

Disc five focuses on alternate takes and out-takes from Empire Burlesque, together with great live versions of Enough Is Enough and License to Kill. With a hard-rocking Seeing The Real You At Last, a sublime Emotionally Yours and a raucous Straight A’s In Love, which has more than a nod to Buddy Holly, I found a renewed enthusiasm for what is a much better rock ’n’ roll album than I had perhaps given it credit for back in the day.

The collection closes with two great songs. New Danville Girl is a long cinematic epic which eventually morphed into Brownsville Girl, the shining light on 1986’s Knocked Out Loaded. Dark Eyes is an alternate take of the acoustic song which closed off the otherwise heavy Burlesque album. 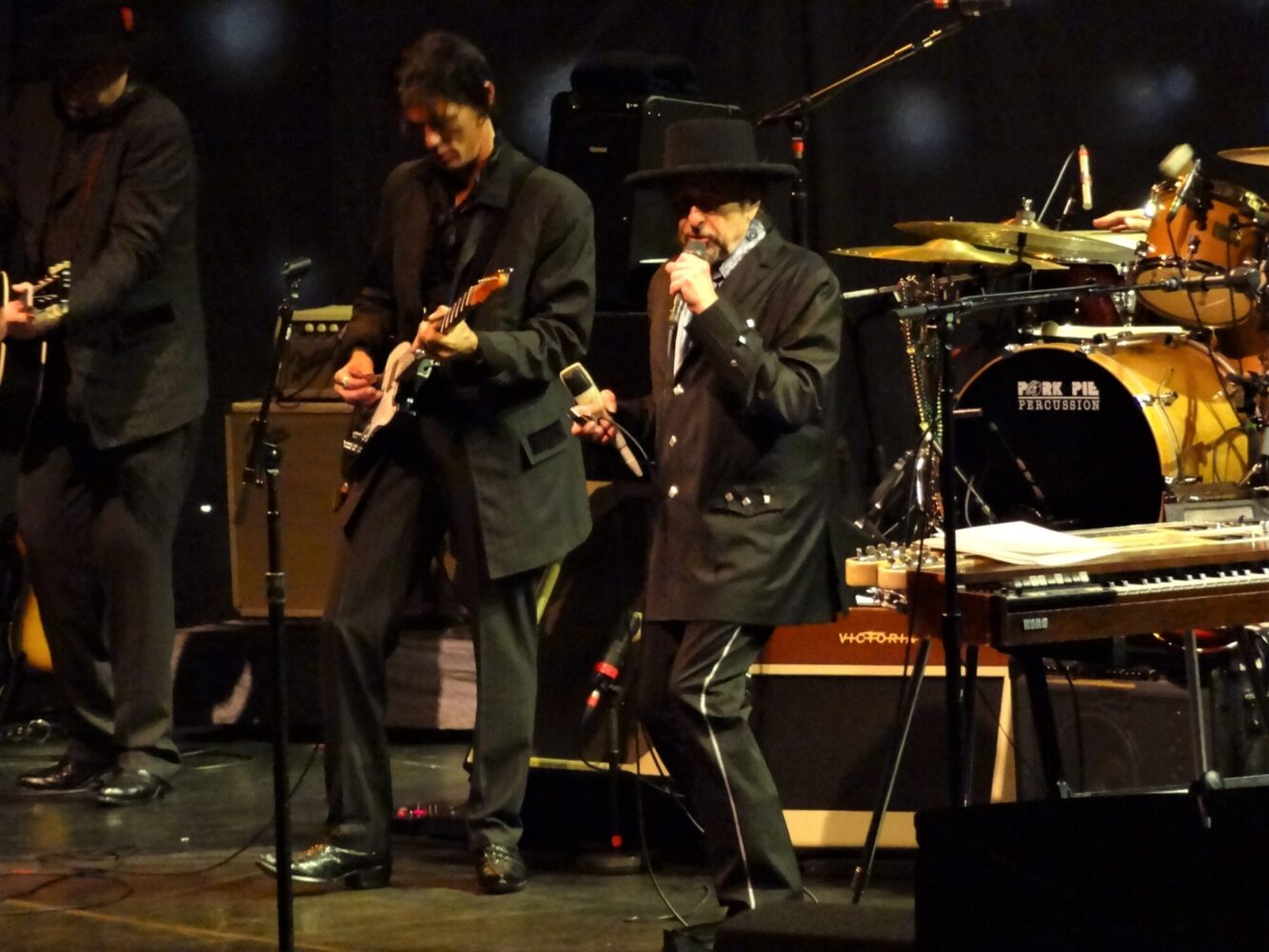 With the release of Dylan’s most recent studio album, Rough And Rowdy Ways, in 2020  delighting fans and critics alike, and Dylan’s hugely enjoyable live stream broadcast in July 2021 entitled Shadow Kingdom, this has managed to get his fan base through the shock of Dylan’s Never Ending Tour coming to a grinding halt due to the global pandemic. And this all came at a time when Dylan was performing some of his best live shows in many years. Now with the release of Springtime In New York, further riches have emerged from the vaults of Bob Dylan’s extensive archives to ease our way towards a return to some form of normality, in both the world at large, but especially in the world of music and live performance.

Springtime In New York allowed me to once again revisit and revaluate a period of Dylan’s career which has too often been overlooked and which now means more to me than ever before. It’s a great collection of songs, performed in a more rough and rowdy and relatively untampered fashion and one which should not be ignored by any serious Dylan fan.

So all we need now is for Bob Dylan to recommence his Never Ending Tour at the youthful age of 80 and all will most definitely be well again. But the questions still remains… what will Bootleg Series Volume 17 focus on?

All words and live pic by Ian Corbridge. You can find more of his writing at his author profile.