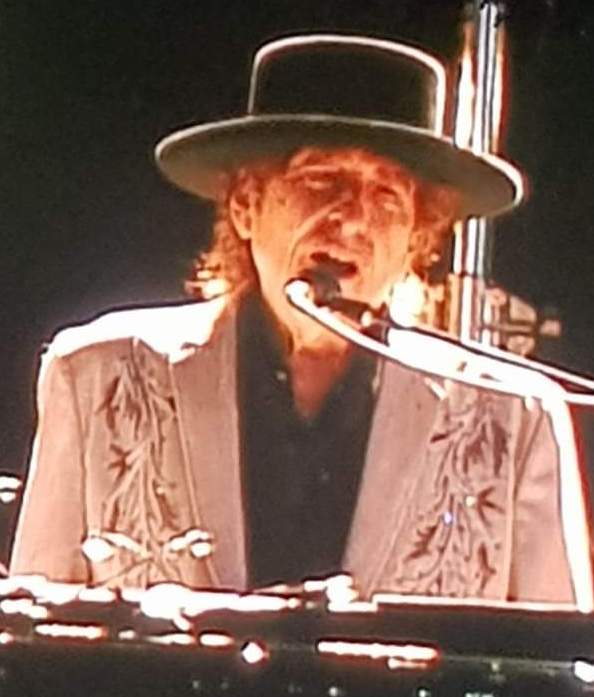 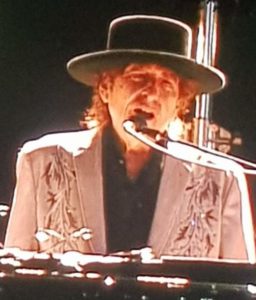 Bob Dylan and Neil Young co-headlined for the first time at Hyde Park. Only one could top the bill but both were at the top of their game in front of 65,000 fans beneath a summer sun, says Tim Cooper.
BOB DYLAN

“Something is happening and you don’t know what it is, do you, Mr Jones?” Well it’s Bob Dylan, blowing minds by taking us from Hyde Park to Highway 61 by starting his set with Ballad Of A Thin Man. OK so the instrumentation is different, the tune and arrangement have been changed, and the voice is a little more weatherbeaten… shall we say ‘characterful’… than of old, but what do you expect at the age of 78?

What we definitely didn’t expect is this. Dylan standing in the spotlight, after decades of lurking at the back in darkness. This could not be more different. Not only is his piano right at the front, but he’s in defiantly show-off mode. Resplendent in a white silk jacket embroidered with sequins, black satin trousers with a go-faster white stripe, brown boots and a black hat, he’s right there, right at the front – and right up there on the big screens – with a maniacal grin lighting up his face.

He stands at the piano, legs akimbo, and at the end of each song he gets up to stretch his legs further, walking to the centre of the stage and literally posing, one hand on his hip – a photo opportunity for all – as he laps up the acclaim.
It’s fair to say this wasn’t what most of us expected. At the age of 78, most people – even most of the ones who paid to come to Hyde Park – must have thought Dylan’s best days were behind him. His voice was shot, they said. He sounded like Yoda, they said. He hardly played any of the old favourites, they said. And he’d messed with the melodies and arrangements so much, they said, that you couldn’t tell what song he was singing. Wrong on all counts.

His voice sounded fine. People have been making jokes about his voice for nearly 60 years anyway. But the whiny emphysemic rasp familiar from his dreadful Christmas album, for example, has disappeared. Perhaps, as his loyal fans claim, he was putting it on all the time. Whatever the answer, he sounds great. When he sings Girl From The North Country, his piano shrouded in a plaintive pedal steel, it’s hard to tell apart from the version on The Freewheelin’ Bob Dylan back in 1963. Yes, that good.

The set begins with an extended trip down memory lane. It Ain’t Me, Babe – somehow reconfigured to sound like “It AIN’T me babe” – followed by Highway 61, then A Simple Twist Of Fate: a solitary song from his finest album Blood On The Tracks. When he plays the harmonica, the place erupts. For the bluesy Can’t Wait, from his last 20th century album Time Out Of Mind, he stands at the centre of the stage, legs apart, playfully pushing the microphone stand out at arm’s length: it’s a wonder he doesn’t turn it upside down for the full Rod Stewart, or raise it to the roof a la Freddie Mercury; thankfully not.

With a sound system that allows us to capture every word of those magical lyrics, the songs surpass their ramshackle bar-room arrangements, though the band should not be underestimated: after more than 3,000 shows since the ‘Never Ending Tour’ began back in 1988, they are as tight as a locking wheel nut; much as Dolly Parton likes to say “It costs a lot to look this cheap,” a band has to be tight to sound this loose.

They draw on every kind of American old-time music – blues, jazz, folk, country, RnB – to create a kind of melange of musical history, whose nearest equivalent is skiffle. There’s a notable country influence thanks to the pedal steel, most obviously on the ballad Soon After Midnight, but they could be Muddy Waters’ band on the 12-bar blues of Early Roman Kings, from his last self-penned album, 2012’s Tempest. Mostly they tread a path in the middle of those, though they can accelerate into RnB as on the hectic closer, Gotta Serve Somebody, from Dylan’s less fondly remembered Christian period in the late Seventies.

The bar-room vibe of Like A Rolling Stone makes it sound almost like a Cockney knees-up in an East End boozer – imagine Chas & Dave having a crack at it – though Dylan’s defiantly different melody seems designed to thwart attempts at a singalong; not that it stops everyone trying, of course. The same thing happens with the encore, a retooled Blowin’ In The Wind and another trip back to Highway 61 for an equally unfamiliar tune to It Takes A Lot To Laugh, It Takes A Train To Cry.

Afterwards, as thoughts turn (as they inevitably do) to whether we might ever see Bob Dylan again, and a crowd of parents heads for home with dads trying to explain the significance of what they’ve seen to small sleepy children on their shoulders, the words of Trying To Get To Heaven linger on: “I’ve been all around the world,” he sings. “Tryin’ to get to heaven before they close the door.” 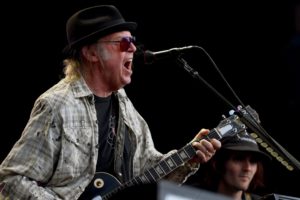 NEIL YOUNG & PROMISE OF THE REAL

“I’ve never played in daylight before,” says Neil Young, squinting into the summer sun shining on 65,000 people in Hyde Park. “It’s great to see you!” It’s hard to imagine any artist apart from Dylan who could persuade Neil Young to go onstage before him: it’s officially a joint headline show, but Young is effectively the support act here. And it’s clear from my own not-so-scientific method of counting T-shirts that more people are here for him than the headliner.

Mind you, it nearly didn’t happen. Furious when he found out the show had been announced without his knowledge – preventing him offering tickets to his Archive fans first – Young refused to play unless sponsors Barclay’s were removed because their association with fossil fuel. The bank was swiftly asked to take its sponsorship elsewhere, giving Young a victory for the forces of environmental well-being… even if that seemed at odds with a stage set involving a distinctly plastic-looking tree trunk with foliage extending over the top. Let’s hope it was recycled.

Rejuvenated since he replaced his old pals from Crazy Horse with a band less than half their age – Lukas Nelson (son of country legend Willie) and his band Promise of the Real – the legendarily grumpy Young’s enthusiastic performance at the age of 73 suggested it is not merely his precious LincVolt car that runs on renewable energy.
Dressed in his trademark battered black hat and flapping flannel shirt, he stands out among his black-clad band members in every way, the big screens showing his gnarled and weathered features as he flailed at his guitar, gurning and hunching over the neck for solos, swaying back and fro like a big game fisherman reeling in a giant barracuda.

After the opening salvo from Ragged Glory come the oldies. He straps on a new guitar for the acoustic Alabama, prompting the first of many singalongs, though his own voice is as strong as ever. Walk On draws a huge cheer and Winterlong features harmonies to rival his old chums in CSN: a significant new string to his bow, and one that enables the inclusion of quieter numbers such as these, and Words, and – to the biggest cheer of all, as soon as he slips the harmonica around his neck – Heart Of Gold.

Nelson switches to 10-string banjo for Old Man, accompanied by plangent slide guitar, and after some crowd-pleasing rockers that occasionally threaten to veer into the sort of noodling jams that Crazy Horse became partial to in later years, the set concludes with the inevitable Rockin’ In The Free World – an optimistic anthem that seems increasingly ironic in our not-so-free 21st century.

Finally, they return, and the curious lectern-like object festooned with Native American decorations that had been hanging from the roof of the stage since the start descends on wires and revealed itself to be an organ – landing in time to adorn the first encore of Like A Hurricane. Warm-up acts just don’t come better than this.

Encore:
Like A Hurricane
I’ve Been Waiting For You
Roll Another Number (For The Road)
Piece Of Crap 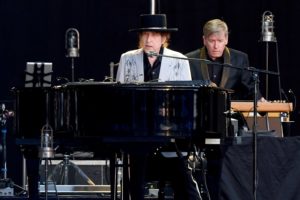 Encore:
Blowin’ In The Wind
It Takes A Lot To Laugh, It Takes A Train To Cry

All words by Tim Cooper. You can find more of Tim’s writing on Louder Than War at his author’s archive. He is also on Twitter as @TimCooperES. Photos by Tim Cooper (top) and David J. Hogan.