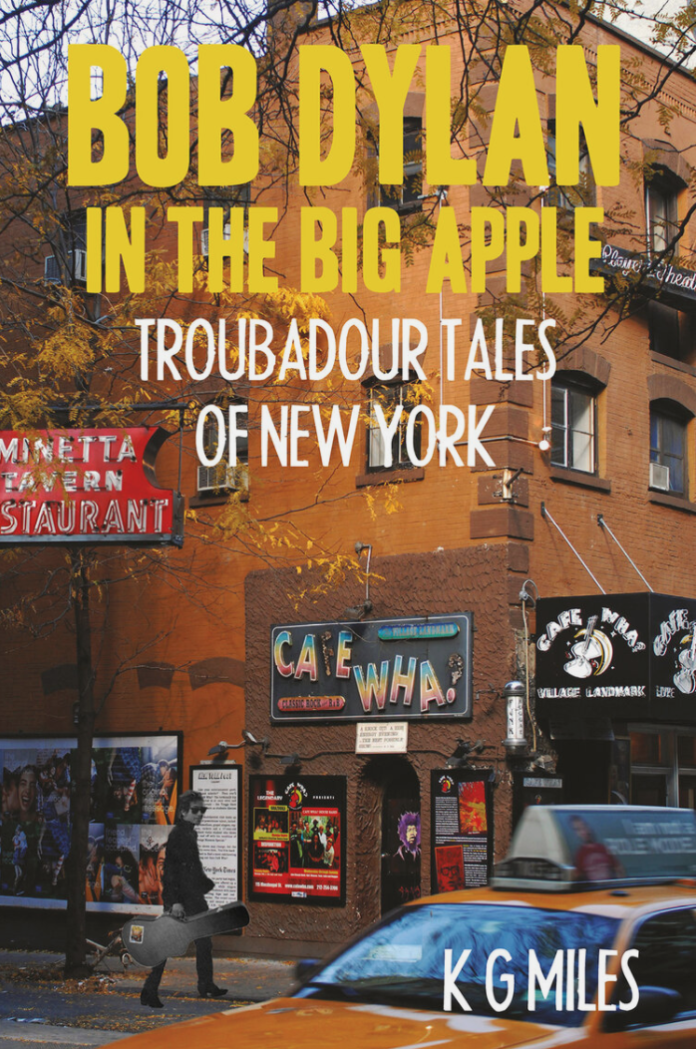 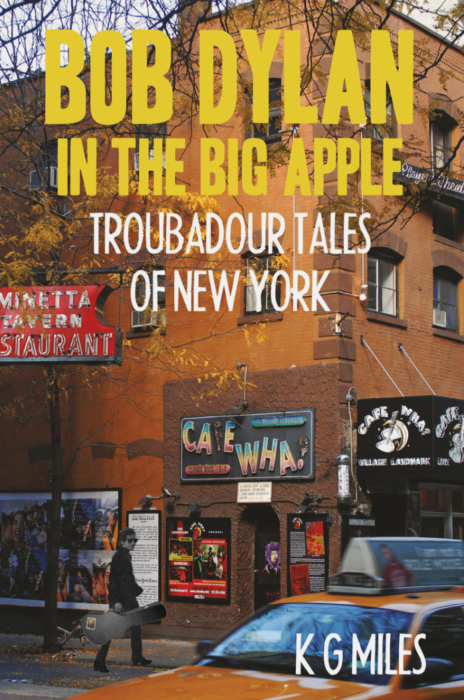 Following up on last year’s Bob Dylan in London: Troubadour Tales, K G Miles’s Bob Dylan in the Big Apple should be of interest to any fan of the artist or New York “music tourist.”

K G Miles has put together another great book for Bob Dylan fans who also love travelling. Beyond providing a guide to visitors of NYC, Miles’s book will also give New Yorkers who weren’t around in the 1960s a chance to know many of these Greenwich village spots from back in their heyday. Some of them are still in operation, of course, while others have transformed into chain stores and spaces for farm-to-table restaurants, reflecting the ways New York spaces shift radically while the city bears traces of its former selves.

Bob Dylan in the Big Apple is arranged largely by locations and specific establishments, including historical information about spots like Cafe Wha?, Izzy Young’s Folklore Center, the Gaslight, the Music Inn, Hotel Earle (now the Washington Square Hotel), and Kettle of Fish (where legend says Bob Dylan and Leonard Cohen met). If you’re spending time in the Village and stopping at some of these places, the book would be a fun companion to have in your bag or in your pocket.

Different New Yorks ultimately emerge in Miles’s new book, from a Manhattan of the early ‘60s to shifting spaces in the Village across the decade, and references to Upstate towns in the Hudson Valley like Woodstock, Saugerties, and Bearsville. (I have just two words for you: Big Pink. Trust me.)

The Greenwich Village map in the center is great and useful, especially for the places that have changed immensely since the 1960s and would be hard to identify on a casual walk. The photographs included in the book are all from the present, reflecting a neighbourhood that looks a lot different than it did when Dylan was hanging around. Experiential knowledge of a place always changes how we perceive it and affects the way we engage with print descriptions of it. So, on that note, I should confess to you that I’m a New Yorker reviewing this book. When I walk along MacDougal nowadays, I think about some of these Dylan spots, but I also think about the glorious 99 Records that came along later, and about the ways the area is often filled with NYU students. And when I pass by Dylan’s old apartment on W. 4th Street, I recognise some of the still-standing dive bars I used to frequent in the early 2000s.

I’d have loved to see a broader New York City map and more photographs, “from Washington Heights to Harlem on down,” if you know what I mean. I could imagine a much longer walking route that includes the Beacon Theatre on the Upper West Side, Carnegie Hall, and the Chelsea Hotel, followed by those Village spots. The Chelsea Hotel hasn’t been in operation now for a while, but its facade still looks much as it did in Dylan’s time. And I’d be keen to see visual references to those “escapades out on the D train,” a subway line referenced in Visions of Johanna that runs from the Bronx down to Coney Island in Brooklyn.

I should note that, beyond the New York locations discussed, there are some fascinating oral history tidbits, including material from an interview with A.J. Weberman about his Dylan encounters and reflections. And speaking of personal histories, Miles’s Introduction to the book is also a heartfelt entry point, particularly his discussion of the live recording of Tomorrow is a Long Time, “a haunting performance from a young Bob Dylan at the Carnegie Hall.” Miles, like his readers, is the best sort of “music tourist,” following in the footsteps of an artist he loves while giving others an opportunity to do the same.

K G Miles co-curates The Dylan Room at the Troubadour in London. You can follow him on Twitter, and you can buy Bob Dylan in the Big Apple: Troubadour Tales of New York from McNidder & Grace.