Bob Crow, leader of the National Union of Rail, Maritime and Transport Workers, died at the age of 52. 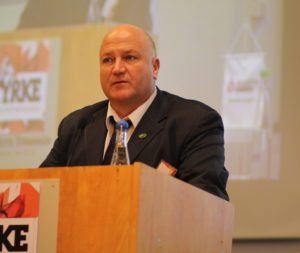 He is reported to have died at Whipps Cross hospital in Leytonstone, East London, after suffering an aneurysm and a heart attack in the early hours of March 11th 2014.

RMT spokesperson Geoff Martin, in a short statement on the RMT website, said:

“It is with the deepest regret that RMT has to confirm that our General Secretary Bob Crow sadly passed away in the early hours of this morning. The union’s offices will be closed for the rest of the day and the union will make further announcements in due course. The media have been asked to respect the privacy of Bob’s friends and family at this difficult and distressing time.”

Not only did Bob Crow fight for all the union’s members, he also increased their numbers dramatically during his tenure, taking the RMT’s membership above 80,000 for the first time; bringing in more maritime workers and reaching out to all transport workers from train drivers to cleaners and ticket office staff.

In an interview with Sky News,  former Mayor of London Ken Livingstone who clashed with Bob Crow over  the 2004 tube strikes said:

“He fought really hard for his members. The only working-class people who still have well-paid jobs in London are his members.”

“He was a true working class hero. His adversaries will now deliver sickening eulogies but his legacy will live on”

My brother Jay who is 29 today said:

“I can’t believe Bob Crow died on my birthday. That’s not a very good present; in fact it’s further proof of the non-existence of God.”

A declared atheist, as Bob Crow was, I think he may well have agreed with that.

He leaves his partner and four grown up daughters and our thoughts are with them and their loss as we salute Bob Crow’s doggedness in the face of corporate greed and the blind interests of capital, and his tireless campaigning for the workers of his own union and standing up in solidarity with both the UK and worldwide labour movement.

The rights of workers to equality, to fairness and to decent pay and conditions always have to be fought for.  Bob Crow knew this and he also knew that this was one fight that never ends.

Through remembering Bob’s determination to keep striving for the rights of working people we can continue to support strong unions that give a collective voice at work to those who would otherwise have none.