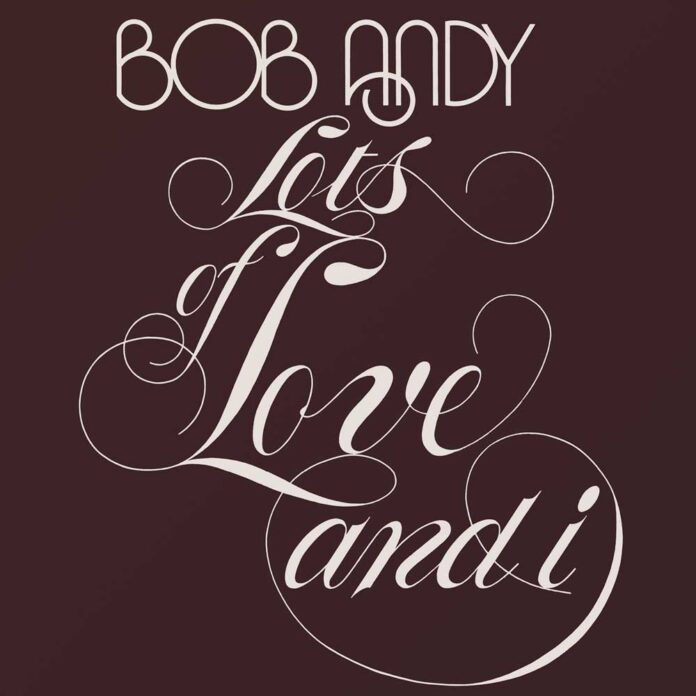 Bob Andy – Lots Of Love And I 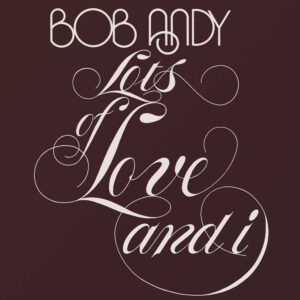 Reissue of ex-Paragons singer Bob Andy’s 1977 landmark album for Sonia Pottinger’s High Note label, with four bonus tracks. This is the first time on CD for Lots Of Love And I. Ian Canty makes himself useful for once…

Keith Anderson, aka Bob Andy, had to endure a tough start to life. But by 1977, when he issued his Lots Of Love And I album, he was one of the leading lights of Jamaican music. As a child he was placed into the care of his relatives, but unfortunately his aunt died when he was 11. He was then placed into the care of a local family. The strict regime this brood operated meant the youngster was subject to regular beatings, so much so he eventually asked to be placed in a Kingston children’s home simply to escape them.

A positive knock-on effect of this was that Keith was able to develop his interest in music, because of the proximity of the home to the Champion House live venue. He was singing to a local church choir too, where he became friends with one Garth Evans, also known as Tyrone, with whom in the near future he would form the original version of vocal group The Paragons.

Qualifying as a psychiatric nurse, Andy worked full time but still kept up his musical commitments. He became part of a quartet called The Binders with Evans, with the group name being soon amended to The Paragons. Bob and Evans were the band’s mainstays as the other personnel fluctuated, until John Holt and Howard Barrett came in to give the band a brief period of stability. They soon became popular, recording in a r&b influenced style for Coxsone Dodd’s Studio One. But by the middle of the 1960s Andy felt the band wasn’t developing in the way he wished, so he left for a solo career.

He returned to Studio One to run errands for Dodd. Bob also laid down some tracks of his own there, with his first big solo single being I’ve Got To Go Back Home. He began to rack up a number of hits in Jamaica and in his songs he addressed issues that presented themselves to the island’s population with a keen eye. He left Studio One and did the rounds of Kingston’s other studios, cutting discs at Treasure Isle, Dynamic and Federal. Around this time he hooked up with Harry J. Johnson and it was with this producer that Andy would have his first brush with international fame around the time of the original reggae boom. With Harry J. at the helm, in 1970 he recorded the old Nina Simone tune Young, Gifted And Black with Marcia Griffiths and the result was pure magic.

It was a massive UK hit for the duo, reaching number five on the UK pop charts. Their follow up Pied Piper just stopped short of the top ten too. The pair eventually parted ways after the slog that was the European pop scene took its toil. A falling out with Harry J. over the proceeds of the hits didn’t help. Bob took up his solo career again and worked frequently as a producer for other artists, including Leroy Smart. Always a man who put his social concerns into his music, he had embraced Rastafari in the 1960s and by the next decade it was very much at the backbone of his work. His faith helped him a great deal in moving seamlessly into the roots reggae era.

Andy released The Music In Me album in 1975. This followed a 1972 Studio One compilation of his work Bob Andy’s Songbook, but the former record was his first collection made up of all-new material. A link up with Sonia Pottinger’s High Note Records in 1977 resulted in Bob Andy’s second album proper Lots Of Love And I, which is what we have here for consideration.

Bob Andy had a great, smooth and soulful voice, but that is only part of his appeal. He wrote his own material, indeed Lots Of Love And I is completely self-penned. The deft way his concoctions managed to straddle both commercial and roots strands of reggae was masterful and is seen at its very best on this LP. The Pottinger set up served him well and his production is assisted by the “none more steady” hand of engineer Errol Brown. The Revolutionaries were also called in – Sly and Robbie, Tommy McCook, Ansel Collins and Vin Gordon were just a few of the top quality musicians that contribute to this album.

Andy’s work here is full of appealing detail, for example the female vocals that come centre stage to great effect on the opening title track. Feel The Feeling is a superlative reggae love song and the lilting and cool Troubled Woman is a moody and magnificent skank. He recuts a pair of his 1960s favourites My Time and Unchained, titled here Unchain Me aka Set Me Free. These are modernised convincingly. Later Mash It Up is brilliantly given vivid life – it is both heartfelt and rousing in the best way.

The soul organ sound and brass of Ghetto Stays In The Mind form the background to a classy piece of roots reggae storytelling. It is masterful and shows Bob’s highly-developed skill in writing songs that felt truly authentic. The final track on the album Revelation really swings. There is a sunny, jazzy vibe to this tune, one that left this listener feeling the world was just that bit better than before I played it. That is priceless.

Appended to this disc are four bonus tracks. The upbeat 12 inch version of Slow Down is another righteous reggae belter with a police harassment theme and a chilled dub section. There are also extended and very nice takes of Set Me Free and Ghetto Stays In The Mind. The Revolutionaries also chip in with Movements, an instrumental take of Set Me Free that was on the flipside of that number’s single release.

Even though Lots Of Love And I was a success for Bob Andy, he chose just after to step away from the music scene soon afterwards. Instead he did some acting, before returning to recording in the early 1980s when dancehall had taken over. He slipped easily back into the groove. Bob performed live and cut new material into the 21st century, but after a mugging incident when he was stabbed, his health started to deteriorate. He died on 27 March 2020 after bravely battling cancer with all the heart that he put into his music. He will be much missed, as the surfeit of highly enjoyable evidence that is present on Lots Of Love And I confirms. An excellent reissue and a testament to a talent that easily negotiated the various trends of Kingston music, whilst always keeping his own unique vision intact.